You are here: Home / Masonic Traveler / The Grand Lodge of Arkansas

The Grand Lodge of Arkansas is the next stop on the tour of American Grand Lodges.

About the Grand Lodge:

The Grand Lodge of Arkansas does not have a listing on Wikipedia.

“Organized Masonry came to Arkansas soon after the formation of the Arkansas Territory in 1819. The first lodge was established at Arkansas Post, the seat of the new Territorial Government, under a dispensation by the Grand Lodge of Kentucky. By 1819, Arkansas Post was a village of about one hundred persons. Since Masonry had been active for a long time in the older states east of the Mississippi, it was quite natural that some of those coming to Arkansas Post would be members of the Masonic Fraternity. Many of them were prominent in the affairs of the Territorial Capitol, and as a result of their efforts, a Masonic Lodge was established there. No records remain of that Lodge except the scattered entries in the Proceedings of the Grand Lodge of Kentucky from whom the dispensations, and later a charter, were obtained”.

From the Grand Lodge website on Freemasonry in Arkansas

Some of what I found on my visit:

URL:  The Grand Lodge of Arkansas has a very straight forward URL at http://www.argrandlodge.org which easily appears on a quick search at Google.  The URL is clever in that it implements the short AR U.S. Post Office abbreviation for the state which is a very utilitarian approach to a field that it otherwise saturated with non state specific names. 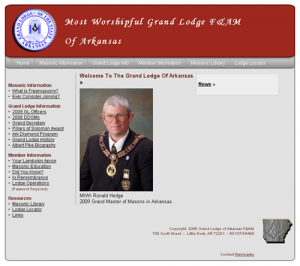 Visually, as you arrive at the site, as with the name, it immediately appears as a very straight forward construction that is both purposeful and well formed.  A big attention grabber is the Grand Lodge logo and deep red banner at the top and the stately gray background, with the photo of the Grand Master in the middle.  It definitely gives the feeling of authority and leadership, which carries through in the structure.  Generally speaking, the site at first glance seems to have much to offer by way of content.

Built in one of the most scalable formats with navigation across the top and on the left side, the site can go a long way in adding future content.  On the top navigation, there are a number of drop down tabs that a visitor can follow to their destination pages which emulates the side navigation (except when encountering password controlled lodge operations pages).

The site overall all has a good look and feel.  Once the visitor gets into the navigation pages, they are treated to a variety of content anchored with images and icons.  Unfortunately there was a lack of uniformity to the artwork and the various icon art the quality and tone detracting from the authoritative red/grey/and black color scheme.

On the front of the site, there is a great depth of navigation but not much to connect it visually

to the state.  Unlike the Grand Lodge of Arizona, with their immediate extensive use of imagery, here we find the opposite, in that there is no real visual connection to the state other than a small silhouette logo on the bottom right corner.

I did find that the site has a lot of information in it.  My favorite bits included the biography of Albert Pike and the well developed history of the Grand Lodge.  Both of these elements added a great deal of depth, and give an impression of its connectivity to the fraternity.

Additionally, there is a great wealth of information for new Masons under the education link including break downs of the various Masonic symbols.  This is a great asset that any visitor could make use of, particularly brothers from that state. The educational snippets, Awards programs, and the charitable endowment plans are good ways to let the membership know what is going on and how they can interact.

However, as the site has a lot of good Masonic information, it is very light of any conversion mechanism, meaning that for as much as any Masonic visitor would find the information interesting there isn’t much to showcase to a young first time visitor who may have an interest what Arkansas Masonry is about.  On one hand, this seems to support the word of mouth development, but in an age increasingly shopping on line first, the site disengages the new or first time visitor with a lot of information.

Let me qualify this by saying that there is a “How to become a Mason” page, that is very thorough.  It approaches the situation in a Q & A style FAQ by going through the myriad questions that a petitioner may have.  This is not, by itself a bad system, but in an age when a visitor to a website spends about 90 seconds on content, the particulars of “How To” get lost in the volume of content.  At the very bottom of that page is a link to “Contact the Membership Team” which leads to a form page for the aspirant to fill in, which is a great way to capture the information.  The only thing I would suggest is to move that contact form to the top and with its own abbreviated “How To” and then insert it into the top level navigation so it stands out.  As it stands now, it is three clicks deep (with the submission) from the main page, and buried in the site.

At the bottom of the left side navigation is the sites links page, with images to the appendant bodies and various organizations important to the state.  It was good to see that the Grand Lodge recognized many of the various groups and listed them so a user could quickly click in and check them out.  Some of the interesting links I found were the Ruffian Chapter of the Order of the Widow’s Sons (a Masonic motor cycle club), and the Scimitar Shrine of Little Rock.  The links pages use of images in the navigation, I think, is a dynamic way to entice the viewer to look deeper into the content.

One thing I did not see was a page dedicated to contacting the Grand Lodge.  The site does include its contact information at the bottom of each page with the address and phone number, but it limits users who want to send an electronic correspondence, unless it is to the webmaster.  The quickest remedy to this is to add a page that could include addresses, maps, contact names, numbers, and email, and so on.  Ideally this would also be in the mix of the top level navigation.

The troubling thing I noticed right off was that the front page news tab was devoid of any news.  This seems a natural place to include upcoming calendar items and events.    As I ventured through the site, I did not easily find the calendar of activities around the state, or any informational mentioning anything that was going.  Once at the calendar (located in the General Grand Lodge Links) I found a wide variety of information, from degrees, conferences, educational programs, banquets and so on.  From a visitor stand point, because of its location, it leaves one wondering what to do when visiting or traveling to the state and it is not until after significant searching (clicking) that its activities became obvious.  From an organizational stand point, the calendar would be an excellent inclusion for the front page news or to be grouped with the news so that it is easier to find.

Generally, the sites informational content is good, and goes a long way to communicate to the membership about the Grand Lodge and its operations.  But it does not address clearly the how and why to become a Mason efficiently, in that where it does go into detail it is to much information.  It definitely gives a rich textual experience of what the state offers but misses tying it into some visual aspects of the state.

From the first time visitor stand point the site does not immediately engage with any conversion mechanism (look, click, sign-up).  That may be overstating the purpose of the site, but it does not seem to take into consideration the non Mason who may visit with a keen interest to find out about Arkansas Masonry.  As a quick comparison, the link mentioned above to the Scimitar Shrine is a very advanced and developed site with video and some interactivity which may be a glimpse into the level of importance (value) that the bodies place in their activities.

As a visiting Mason, the site is enjoyable and does entice additional time spent to look at its  wealth of resources and goings on to get a feel for what Masonic life is like there.  As a visiting non Mason, it definitely leaves me wondering why becoming a Arkansas Mason is valuable.

Coming up next – The Grand Lodge of California

END_OF_DOCUMENT_TOKEN_TO_BE_REPLACED

Raised to a Master Mason in 1908, at Harmony Lodge No. 17 in Washington, DC, Carl H. Claudy  served as the Master and eventually as Grand Master of Masons … END_OF_DOCUMENT_TOKEN_TO_BE_REPLACED

In this final installment of the Faith Hope and Charity series, we consider the symbolism of charity, or perhaps better called love. It is this attribute that … END_OF_DOCUMENT_TOKEN_TO_BE_REPLACED

In this installment of the Symbols and Symbolism of Freemasonry, we examine the text of Albert Mackey's Encyclopedia of Freemasonry on the symbolism of … END_OF_DOCUMENT_TOKEN_TO_BE_REPLACED

In this installment of the Symbols and Symbolism of Freemasonry, we consider a reading of Albert Mackey's text on the subject of Faith as it pertains to … END_OF_DOCUMENT_TOKEN_TO_BE_REPLACED