You are here: Home / Sojourners / The Fall of Solomon 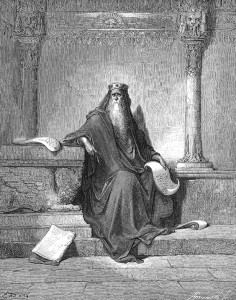 King Solomon of Israel is referred to in Masonic tradition as being the fraternity’s first Most Excellent Grand Master. He is championed as the man who constructed the magnificent temple for Jehovah and is heralded as the personification of wisdom. However, a closer look at the life of King Solomon shows that he wasn’t always worthy of emulation.

It is true that Solomon had multitudes of wives and concubines, but that will not be the source of any criticism in this article. Many Biblical kings had large harems, including Solomon’s father David. No, Solomon would be condemned for the very sin which had plagued his people for centuries: putting other gods before Jehovah.

As Solomon grew old, his wives turned his heart after other gods, and his heart was not fully devoted to the Lord his God, as the heart of David his father had been. He followed Ashtoreth the goddess of the Sidonians, and Molech the detestable god of the Ammonites. So Solomon did evil in the eyes of the Lord; he did not follow the Lord completely, as David his father had done.

The Hebrews could be a strange people. God parted the Red Sea and freed the Israelites from slavery. Then he gave them a pillar of clouds by day and a pillar of fire by night to guide them. Then he provided them with manna to nourish them. Yet, the Hebrews worshiped other Gods. In Solomon’s case, he was allowed to complete the Lord’s temple and was blessed by the presence of the Ark of the Covenant. Still, he decided to disobey the First Commandment.

Like many main characters in the Old Testament, Solomon’s place of prominence came only through special circumstances. When David was old and frail, Bathsheba convinced him to place Solomon on the throne of Israel (indeed, the influence of women can be great). Solomon was certainly not David’s first choice for his heir. Joseph Heller’s God Knows

gives a fictional account of the events surrounding the elderly King David. Heller portrays Solomon in a less than flattering manner in this humorous work. In the story, King David says of his son:

And I was smart enough to appreciate that for Solomon you had to spell everything out. I’ll let you in on a secret about my son Solomon: he was dead serious when he proposed cutting the baby in half, that putz. I swear to God.

While this portrayal may have no real historical basis, this much is true: Solomon was made king only through the unfortunate deaths of David’s older sons, he built his temple only through a blessing secured by his father, and he managed to nearly destroy the promising future which God had given David’s offspring. Nevertheless, 1 Kings 4:29 says that “God gave Solomon wisdom and very great insight, and a breadth of understanding as measureless as the sand on the seashore.”

Through this knowledge he was able to secure his place in history as the builder of the Lord’s temple and has been given the honor of being a prominent figure in Masonic tradition. Like all men, Solomon may have had faults, but some of his actions have earned him respect. This is a lesson that can benefit all Masons. Masons must recognize that all men have their redeeming qualities as well as their imperfections. The Mason should never hesitate to clearly identify these qualities in the men that they have identified as being worthy of emulation.

END_OF_DOCUMENT_TOKEN_TO_BE_REPLACED

In this final installment of the Faith Hope and Charity series, we consider the symbolism of charity, or perhaps better called love. It is this attribute that … END_OF_DOCUMENT_TOKEN_TO_BE_REPLACED

In this installment of the Symbols and Symbolism of Freemasonry, we examine the text of Albert Mackey's Encyclopedia of Freemasonry on the symbolism of … END_OF_DOCUMENT_TOKEN_TO_BE_REPLACED

In this installment of the Symbols and Symbolism of Freemasonry, we consider a reading of Albert Mackey's text on the subject of Faith as it pertains to … END_OF_DOCUMENT_TOKEN_TO_BE_REPLACED

In this edition of Freemason Information’s Symbols and Symbolism we consider, together, the four cardinal virtues of Freemasonry as gathered form Albert … END_OF_DOCUMENT_TOKEN_TO_BE_REPLACED