You are here: Home / The Euphrates / Dan Brown’s New Book is Coming Out-So What? 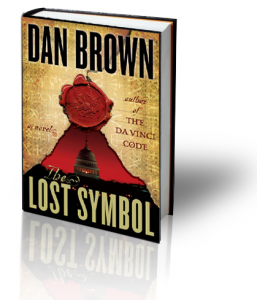 On Tuesday, September 15th, Dan Brown’s new book entitled The Lost Symbol will hit shelves at bookstores throughout the U.S. and probably most of the world. Because his previous book The DaVinci Code is one of the most widely read books in history, many people believe that The Lost Symbol has the potential to be a cultural phenomenon as well.

Freemasons have been among the most devout followers of the development of The Lost Symbol because Brown made it clear that the book would deal with the institution of Freemasonry.  Now that the release of the book is imminent, the excitement and angst among Freemasons about the book has reached a fever pitch and after reading several blog and website entries over the past few weeks, it appears that many Freemasons fear that they will have to defend the organization against any attack that Dan Brown may make on the world’s oldest fraternity.

However, I remain indifferent about this event. So The Lost Symbol deals with Freemasonry, so what?

For those worried about what dispersions the book may cast on Freemasonry, I must ask a simple question: Doesn’t Dan Brown write fiction? It is true that I have personally spoken to more than one person that read The DaVinci Code and remained firmly convinced that Jesus had a child and the Catholic church knows it.  However, these cases are rare and aren’t really worth worrying about.

Dan Brown’s book will more than likely spike Google searches on “Who are the Freemasons?” or “What is Freemasonry?” Some of those people will wind up on Freemasonry Watch and some of those will wind up on Freemason Information.  Some of those people will believe that Masonry is part of some conspiracy and some may just petition our lodges. I believe that we waste way too much time worrying about the former and not enough time worrying about the latter. Those that petition our lodges because they have read The Lost Symbol and performed subsequent research will require us to take a closer look at the fraternity and answer some questions. So let’s examine some of the inquiries to which we may have to give a response.

Petitioner’s Question: “So is any of the stuff about Freemasonry in The Lost Symbol true?”

This question is simple to answer because anything hinting at a conspiracy in the book is obviously false, unless you one of those Freemasons that is still trying to prove to yourself that you are not part of some heinous, New World Order planning organization.

Freemason’s Answer: “You must realize that Dan Brown’s book is a work of fiction, it’s solely meant for entertainment. Have you conducted any other research about the fraternity? If you haven’t, I’ll give you some real information and you can look through it and decide for yourself if Freemasonry is something that you want to pursue further.”

Petitioner’s Question: “So what do Freemasons really do?”

Now this is an interesting question. Will you be honest or will you paint a pretty picture of your lodge meetings. Many lodges would have to answer this question by saying, “Well, we pay the bills, sometimes we have cold baloney sandwiches afterward, and once in a while we’ll raise a little money for charity.” So if we want to answer this question honestly and give an attractive view of our fraternity to those that may want to join we are going to have to start changing the way we operate our lodges so that we can give the following answer.

Freemason’s Answer: “Freemasonry is a fraternity that believes in actively improving its members through a virtuous education, fellowship, and charity. In order to become a Freemason, you will have to take three degrees which provide a wonderful course of allegorical instruction designed to help you become a better man. After becoming a Mason you will help to confer these degrees and learn more about their symbolism through philosophical instruction and discussion. Freemasons also enjoy fellowship with each other through several activities which include fine dinners and other various lodge functions. Freemasonry is also a charitable organization that provides relief to its members and contributes to external charities such as the Child Identification Program.”

Petitioner’s Question: “So who can join Freemasonry?”

You should know this answer by now.

Freemason’s Answer: “If you are a man of legal age, of good moral character, who believes in a Supreme Being, and already has the Masonic principles firmly imprinted in his heart and mind, then you can become a Freemason.”

Ultimately, Dan Brown’s book can only be good for Freemasonry, because it will spike interest. Any publicity is good publicity after all. But if we want to make the most out of this opportunity, we will have to take the following actions: guard the West Gate and make sure that we give these new men what they expect from the order. We will have to use their skills, their ideas, and their fresh point of view to strengthen and enhance our beloved institution.

Or we can just keep doing what we’ve always done and see yet another crop of perfectly good Masons disappear because they were disappointed in what they found once they entered the Sanctum Sanctorum.

END_OF_DOCUMENT_TOKEN_TO_BE_REPLACED

Raised to a Master Mason in 1908, at Harmony Lodge No. 17 in Washington, DC, Carl H. Claudy  served as the Master and eventually as Grand Master of Masons … END_OF_DOCUMENT_TOKEN_TO_BE_REPLACED

In this final installment of the Faith Hope and Charity series, we consider the symbolism of charity, or perhaps better called love. It is this attribute that … END_OF_DOCUMENT_TOKEN_TO_BE_REPLACED

In this installment of the Symbols and Symbolism of Freemasonry, we examine the text of Albert Mackey's Encyclopedia of Freemasonry on the symbolism of … END_OF_DOCUMENT_TOKEN_TO_BE_REPLACED

In this installment of the Symbols and Symbolism of Freemasonry, we consider a reading of Albert Mackey's text on the subject of Faith as it pertains to … END_OF_DOCUMENT_TOKEN_TO_BE_REPLACED