You are here: Home / The Euphrates / In His Image 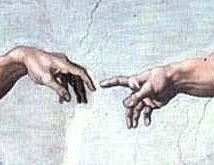 Throughout my entire life, there has been one Biblical passage that has fascinated me more than any other. It appears early in the first book of the Bible in the first chapter of Genesis.

“So God created man in his own image, in the image of God he created him; male and female he created them.” (Genesis 1:27)

The statements contained within this Biblical passage could provide every man with a lifetime of contemplation and could provide topics with which an endless supply of tomes could be created. I have no desire to discuss the last part of the passage which concerns the gender of the Almighty. Instead, I am going to focus on the first part of the passage which states that we (man) were created in His image. In particular, I want to discuss an esoteric and somewhat controversial subject: if we were created in His image, can we become Gods?

The reason that I ask this question is because there was a time that I would have loudly proclaimed “No!” The issue that brought this subject to light for me was gene therapy. According to the Oak Ridge National Laboratory website, “Gene therapy is a technique for correcting defective genes responsible for disease development.”1 When I first considered the concept of correcting defective genes, I decided that the practice was nothing more than man “playing God.” The idea frightened me and I was uncomfortable with the subject.

Years later, I began exploring the meaning of the previously mentioned passage from Genesis. While I was struggling with the concept of being created in God’s image, another scientific concept came to my attention. A laboratory in Switzerland has been working on recreating the Big Bang in order to understand how the universe was created.2 It was at this point that I started asking the question: what if we are just understanding how God created the universe?

This inevitably led me to link science with religion. Through science we better understand the universe and all things therein contained. Therefore, we enhance our knowledge of God’s creation and also are empowered with that knowledge to become creators ourselves. Ultimately, we must ask ourselves “If we can recreate the conditions that created the universe, if we can cure and eliminate genetic diseases, and if we can manipulate all of nature to suit our will, have we become more like God?” For me, the answer has shifted from a firm “No!” to a contemplative “Perhaps.”

Everyone has an opinion. The important thing is that we ask the question.

END_OF_DOCUMENT_TOKEN_TO_BE_REPLACED

Raised to a Master Mason in 1908, at Harmony Lodge No. 17 in Washington, DC, Carl H. Claudy  served as the Master and eventually as Grand Master of Masons … END_OF_DOCUMENT_TOKEN_TO_BE_REPLACED

In this final installment of the Faith Hope and Charity series, we consider the symbolism of charity, or perhaps better called love. It is this attribute that … END_OF_DOCUMENT_TOKEN_TO_BE_REPLACED

In this installment of the Symbols and Symbolism of Freemasonry, we examine the text of Albert Mackey's Encyclopedia of Freemasonry on the symbolism of … END_OF_DOCUMENT_TOKEN_TO_BE_REPLACED

In this installment of the Symbols and Symbolism of Freemasonry, we consider a reading of Albert Mackey's text on the subject of Faith as it pertains to … END_OF_DOCUMENT_TOKEN_TO_BE_REPLACED