You are here: Home / The Bee Hive / Answer To Puzzler #5 and the Presentation of Puzzler #6

Here are my answers to puzzler 5

1) Where was GM Hiram Abiff from (his land of origin)? – He came from Tyre whether from Napthali/Dan is still debated. Modern Tyre lies in Lebanon, near its southern border, and forms the country’s fourth-largest city.

He was the “master workman” whom King Hiram of Tyre sent to Solomon. He was the son of a widow of Dan, and of a Tyrian father, who cast the magnificent brazen works for Solomon’s temple in clay-beds in the valley of Jordan, between Succoth and Zarthan.

In his, “Antiquities of the Jews” (Chapter 3:76), Josephus Flavius in his refers to Hiram as an Artificer. “Now Solomon sent for an artificer out of Tyre, whose name was Huram: he was by birth of the tribe of Naphtali, on his mother’s side (for she was of that tribe); but his father was Ur, of the stock of the Israelites.”

1 Kings 7:14 (NKJV) – He was the son of a widow from the tribe of Naphtali, and his father was a man of Tyre, a bronze worker; he was filled with wisdom and understanding and skill in working with all kinds of bronze work. So he came to King Solomon and did all his work.

2) What is the name given to him by Josephus, biblically speaking? – The names given to him are Huram Abi or Abdamen or Abdemon  which has been alternatively thought to mean “my father” , or if used as a proper name, or it may perhaps be a title of distinction and the equivalent to “master.”

2 Chr. 2:13 (NKJV) – And now I have sent a skillful man, endowed with understanding, Huram my master craftsman

2 Chr. 4:16 (NKJV) – also the pots, the shovels, the forks––and all their articles Huram his master craftsman made of burnished bronze for King Solomon for the house of the LORD.

3) Why does this fact (that he needed to go and “lay out” the next days” work on the trestle board) appear to be in direct contradiction to the description of the building of KST in the books of Kings and even from the first and second degree rituals?

Well to be precise, why would he even have to go and lay out the next day’s work when the temple is very nearly done?  I would think that the closer you are to completion, the LESS the need for a plan. Biblically, we are told that not only were the plans drawn and the specifications approved, but every other preparation was made for completing the work before the foundations were laid; Remember, this was originally David’s task but as passed on to King Solomon (Check out the entire 1 Chr. 22 (NKJV) to get up to speed on this, if you need verification). But even if the plans had not been previously laid before the foundation, the stone and timber were carved, marked, and numbered before they were removed from the quarry and the forest; and, hence nothing was required, when the materials were conveyed to Jerusalem, but skilled labor to make it perfect and complete from foundation to capstone.

4) How is it possible for GM Hiram Abiff to enter into the “Sanctum Sanctorum” if the Temple was unfinished?

Our rituals and legend tells us that at the hour of high 12 (1200hrs for military men like me), the men were called from labor to refreshment, then GM Hiram Abiff would retire to the Most Holy Place (Sanctum Sanctorum), to draw his plans and designs, and offer up his prayers and thanksgiving. This could only be accomplished if the Sanctum Sanctorum was somehow finished before the outer portions of the KST.  That is the best I can come up with. Nothing that I have read tells us that this is the case…so the question remains, for now!

5) If the Sanctum sanctorum was finished (completed it was supposed to house the Ark of the Covenant), would he have been allowed into its presence there? 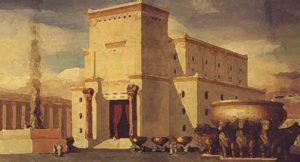 So for arguments sake, we will assume that the Sanctum Sanctorum is completed. If it was finished, GM Hiram Abiff would not have been permitted to enter into it. According to God’s law and Jewish religious tradition, only one living person could do this and even then he could only gain access to the Holy of Holies (home to the Ark of the Covenant) only once a year, on the day of atonement. No one was permitted to enter but the H. P. (High Priest). This place was considered so holy in fact, that when the HP went into the Sanctum Sanctorum, he had a rope tied around his waist, so that he might be pulled out of the Sanctum Santorum in case his sudden death should occur while he was inside.

Under the law of Moses the presiding officer of the Aaronic Priesthood was called the high priest. The office was hereditary and came through the firstborn among the family of Aaron, Aaron himself being the first high priest of the Aaronic order. The office was usually a lifetime calling and it was restored to the family of Eleazar in the person of Zadok (High Priest during the reign of both king David and King Solomon).

For more information please check out:

Especially check out the way his consecration differed from that of ordinary priests in anointing and robing: on the high priests’ head alone was the anointing oil poured

BTW, The epistle to the Hebrews discusses at some length the manner in which Jesus Christ is the great High Priest, of whom all the others were pre-figures (Heb. 5: 1-10; Heb. 9: 28).

6) Is this story consistent with what the bible records about what happened to GM Hiram Abiff before, during and after the building of KST?

This legend of Hiram Abiff (Huram Abi, Abdemon, etc.), on the surface, does not appear to be consistent with the biblical/historical account. But maybe we have to dig a little deeper. The Holy Bible NEVER mentions the death of GM  Hiram Abiff. According to the works of Ancient Hebrew historian, Josephus Flavius, GM Hiram Abiff not only lived to finish all the work, but also, returned to Tyre, and died there at a good old age.

Some people believe that the allegory contained in the story of GM Hiram Abiff is, at the very least, a composite of the three biblical figures, Betzalel (one of the wisest biblical figures), Adoniram (of the greatest managers with excellent supervisory skills) and  Huram Abi (great metal worker) sprinkled on top of those is the knowledge of a Master Mason.

So, whatever you believe about this story, there is room for numerous interpretations of the allegory and they should always lead us farther down the road, toward more light!

Does this suggest that KST was built inside out, I may spend a little time on this.?

In question 4, I wasn’t suggesting that the temple was built from the inside out, I was trying to apply a logic puzzle to the enigma of GM HA being in the Sanctum Sanctorum of the unfinished Temple…IF the Temple construction took place as the bible states, THEN it is physically impossible for him to be in there at that time. Therefore, the only plausible way for him to have retired there, would be for the Sanctum Sanctorum to have been completed before the rest of the temple.

Leaving aside this for the moment, and assuming that the Santum Sanctorum was available, as the ritual says,the more important question is actually whether or not he would have been allowed in there…The bible tells us that only the High Priest, Zadok from the house of Eleazar during the building of KST–King Solomon supposedly deposed Abiathar and placed him as HP, was allowed inside (see Exodus 28:1-2; Exodus 29:4-5; Leviticus 6:15)once a year, on Yom Kippur (Hebrews 9:3-7)… This is a truly apparent contradiction that compels us all to look deeper.
Your diagram is great is explaining what you describe, but I would like to point out that in ancient and modern Hebrew the name Beit HamiKdash actually translates into “The Sanctified House” and is usually used to mean the entire temple structure. More specifically, the Hebrew name for Sanctum Sanctorum/ Holy of Holies is Kodesh Kodashim.
Puzzler #6

Brothers, As we travel through masonry on our quest to find more light, many times, we concentrate on ensuring that we know and understand our ritual inside out. That is a very noble and worthy goal. However, we must not forget our Rule and Guide ( one of the great lights). So this week I thought I would try something slightly different. I will give you some passages from the bible ( well technically, I will only give you the references, you will have to look them up) and then you are to tell where it applies in the Ritual (what degree, what portion of the ceremony, etc.)! This should be a lot of fun, as some of these you know already, while some, you may not be as familiar with. Here we go:   Deuteronomy 23:21-23 Ecclesiastes 5:4-5 Numbers 30:2 James 2:20 Genesis 3:7 Acts 19:12 Genesis 3;24 Joshua 5:13-15 Nehemiah 7:1-3 Exodus 3:13-15.

END_OF_DOCUMENT_TOKEN_TO_BE_REPLACED

Raised to a Master Mason in 1908, at Harmony Lodge No. 17 in Washington, DC, Carl H. Claudy  served as the Master and eventually as Grand Master of Masons … END_OF_DOCUMENT_TOKEN_TO_BE_REPLACED

In this final installment of the Faith Hope and Charity series, we consider the symbolism of charity, or perhaps better called love. It is this attribute that … END_OF_DOCUMENT_TOKEN_TO_BE_REPLACED

In this installment of the Symbols and Symbolism of Freemasonry, we examine the text of Albert Mackey's Encyclopedia of Freemasonry on the symbolism of … END_OF_DOCUMENT_TOKEN_TO_BE_REPLACED

In this installment of the Symbols and Symbolism of Freemasonry, we consider a reading of Albert Mackey's text on the subject of Faith as it pertains to … END_OF_DOCUMENT_TOKEN_TO_BE_REPLACED