You are here: Home / Masonic Traveler / Music for the Masonic Lodge

Sibelius was one of the founding members of “Suomi loosi” – the Suomi Lodge which was the first lodge to be founded since in 1809. The first Finnish Masonic lodge was founded in 1756 and lasted for a short 53 years when Russia took control of the country in 1809.

Following Finland’s independence, a number of men emigrated from America to the land of the Finns. In that emigration came the idea to reopen a lodge of Freemasonry.  One of those early pioneers of Finnish Masonry was composer Johan Julius Christian Sibelius.

Born into a Swedish-speaking family in Hämeenlinna, in the Russian Grand Duchy of Finland, Sibelius knew at an early age had a passion for music — studying to become a violinist at the age of 15. He went on to study law, but soon followed his passion leaving law school to study music in the Helsinki music school, and later in Berlin and in Vienna, only to lament in writing that “It was a very painful awakening when I had to admit that I had begun my training for the exacting career of a virtuoso too late”.

In his career, Sibelius was prolific, penning some 40 plus symphonic works, many of which are played today with great affection.  One of his most notable works is the Nationalist symphony Finlandia, written when the Grand Duchy of Finland was chafing under the dictatorship of Czarist Russia.

The music was initially was discussed in the founding of the masonic lodge Suomi, where it was recorded in the minutes that he would compose original Finnish music for the lodge, and that he would become their organist.

But, as with most active professionals, Sibelius was a busy man traveling frequently and only able to attend half of the years lodge gatherings, and even less time in the years that followed. When he was in attendance, he did site behind the lodges Mannborg harmonium.

His visits and playing, however, were slow in evolving into the Musique Religieuse, which came only after the motion was made in 1926 to ask Sibelius to write the special ritual music. the request was made with the donation of 10,000 marks to facilitate the work. Early in 1927 the work was completed and played in its entirety on January 12th, 1927. The work was played by Wäinö Sola and Arvi Karvonen. Among those in attendance was the Grand Master of Finland who said of his music that it would cause Sibelius to “shine forth and be immortalized.”

Since the writing of the composition, the music has been used in their degrees, and it has been extracted and re-purposed in made use of in other forum. One such use is his closing hymn Sulkemishymni which has been re-dubbed Salem, a tune you might recognize from the church known as Processional: Onward, Ye Peoples which came from Op. 113: No. 6. The lyrics of that symphony you might find interesting, the lyrics are below the video:

Onward ye peoples[brethren], strive for the Light!
The Light that the Lord hath given us for our guide;
Who through murk and darkness of night
Hath led us in safety unto our reward.

See how the fiery pillar is gleaming, lighting our steps when dark is the way
And the Light of the World,
it cleaves the gloomy blackness of night that else would engulf us.
See the cloudy pillar to shield us safe when the sun would blister us.
Then forward where faith reveals the way,
For God is our guide, and He will never fail.

Fires are gleaming, voices are singing
forth from Mount Neboh’s heaven storming heights.

Then forward where faith reveals the way,
For God is our guide, and HE will never fail.

Fires are gleaming, voices are singing
forth from Mount Neboh’s heaven storming heights.

Salem! Salem!
Still, they call us upward and on to our Father’s home.
Salem! Salem! On the horizon, urging us on to God and our home;

This piece was the closing of the ritual work.

Of the honors bestowed upon Sibelius, he has been given an honorary doctorate conferred by Yale University 1914 and a national holiday throughout Finland in 1935 in honor of his 10th birthday, followed by a commemorative stamp on his 80th birthday. American Masonic honors an honorific 6 times by the American Lodge of Research of which his music formed an integral part of the program. In 1938 he was given the Distinguished Achievement Award by the Grand Lodge of New York in 1938. In 1950 and 1955 a special exhibit was arranged in the Grand Lodge Library and Museum on occasion of his his 85th and 90th anniversaries.

You can play a sample of Op. 113: No. 6. Salem, Onwards Ye Peoples! to get a feel for its Masonic composition as titled Onward, Ye Brethren! 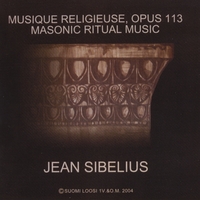 While writing this, I’ve had playing a downloaded copy of the CD, which you can find here too for $9.99, and its interesting music. I’m not well versed on classical music or choral music for that matter, but it has a haunting feeling to it, every bit reminiscent of what a early Masonic Lodge feels like, at least to my ears. It has the feeling of warm church organ music and could likely be played in any church without any mention of its Masonic origin and be just as easily enjoyed. My favorite is Sulkemishymni – Onwards, Ye Peoples! It speaks volumes to the 2nd degree – in a column of fire and a column of cloud, both of which are motifs in my own tracing board rendering.

Ownership and copyright of the music resides in Finnish hands with Lodge Suomi though some confusion over a republication of it in 1937 by the Grand Lodge of New york, but since it has remained in the hands of the Grand Lodge of Finland.

Truly, Musique Religieuse Op. 113 – Masonic Ritual Music is worthy of the Masonic Lodge, and well worth adding to your collection of Masonic treasures. I would be so bold as it would enliven any ritual work, if played in lodge as it’s composition is by a brother for the lodge.

You can find Jean Sibelius: Musique Religieuse Op. 113 – Masonic Ritual Music on Amazon or on Itunes

My thanks to the websites Sibelius and Masonic Music for the history. You can read more on Sibelius at Wikipedia.

END_OF_DOCUMENT_TOKEN_TO_BE_REPLACED

In this final installment of the Faith Hope and Charity series, we consider the symbolism of charity, or perhaps better called love. It is this attribute that … END_OF_DOCUMENT_TOKEN_TO_BE_REPLACED

In this installment of the Symbols and Symbolism of Freemasonry, we examine the text of Albert Mackey's Encyclopedia of Freemasonry on the symbolism of … END_OF_DOCUMENT_TOKEN_TO_BE_REPLACED

In this installment of the Symbols and Symbolism of Freemasonry, we consider a reading of Albert Mackey's text on the subject of Faith as it pertains to … END_OF_DOCUMENT_TOKEN_TO_BE_REPLACED

In this edition of Freemason Information’s Symbols and Symbolism we consider, together, the four cardinal virtues of Freemasonry as gathered form Albert … END_OF_DOCUMENT_TOKEN_TO_BE_REPLACED