You are here: Home / The Bee Hive / These Were Brethren – Carl Claudy Yarns 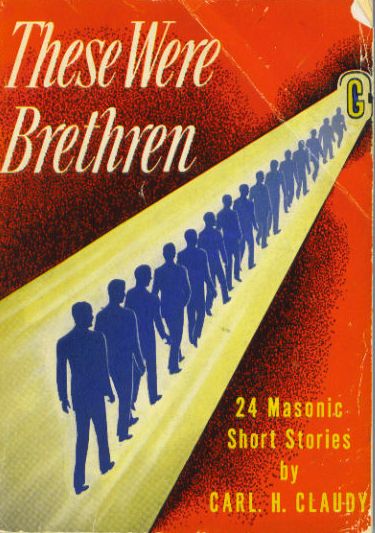 When the gathering of the family, that is a joy, but goes on and on during the holiday season, and exhaustion sets in for all the partying, it is nice to get away and curl up in a cozy corner all by one’s self to relax. At such times a good book will be just the elixir that one needs.

In just such a getaway moment I reached for an old book not touched for years on end from my bookcase.  And what to my surprise should appear in my hands but Carl Claudy’s These Were Brethren, a collection of 24 Masonic short stories. Claudy is the master of the short story and not a bad playwright to boot. He is often best remembered for his Old Tiler Talks.

The very first story, The Gentle Masonic Way, had me in a state of nostalgic Masonic bliss. Here I met once again Worshipful Master Amos Andrews, Secretary Jeffries, Billy Morton, Dr. Witherspoon, Sneed and all the regulars from Doric Lodge.

My first encounter with Doric Lodge and all its characters was when I performed with a group of Masonic players who put on the Carl Claudy play A Rose Upon The Altar.  It has been ten years since I played the part of Squire Bentley in a tear jerking performance.

Now here was Amos Andrews once again up to his eyeballs in what the British would call a “sticky wicket.” It seems that his son has come of age and petitioned Doric Lodge for membership. Repeated balloting a year apart has brought forth a black ball each time. The suspected culprit is an old time member of the Lodge who owns an expensive herd of cattle. The story goes that young Andrews shot his prize bull, worth a great deal of money, as it was mauling a vagrant.  Now it is payback time.

Worshipful Andrews will not resort to subterfuge to sneak his son through the balloting process.  But after the ranch owner fires his ranch foreman and all the workers he comes down with an illness that leaves him bedridden.  Meanwhile a crippling winter blizzard hits the area and this ranch owner cannot feed and care for his cattle.

As the story comes to an end this bitter rancher out for revenge comes to Lodge a week later to once again participate in the balloting on young Andrews. But this time he has a change of heart and drops a white ball as he reveals that Worshipful Andrews spent three whole days and nights in his barn feeding and caring for his cows.

Claudy’s references to farming and cows are dated with analogies not easy to visualize in this day of mechanization and The Information Age. But the stories are timeless just as the references to sheep and sheep herding in the Bible provide analogies to timeless parables.

There are 23 more stories to tickle your fancy in this book including an outstanding mystery. So once in awhile reach into your bookcase and reacquaint yourself once again with a work of inspiration you have not visited in years, thereby renewing a right spirit within yourself.

END_OF_DOCUMENT_TOKEN_TO_BE_REPLACED

In this final installment of the Faith Hope and Charity series, we consider the symbolism of charity, or perhaps better called love. It is this attribute that … END_OF_DOCUMENT_TOKEN_TO_BE_REPLACED

In this installment of the Symbols and Symbolism of Freemasonry, we examine the text of Albert Mackey's Encyclopedia of Freemasonry on the symbolism of … END_OF_DOCUMENT_TOKEN_TO_BE_REPLACED

In this installment of the Symbols and Symbolism of Freemasonry, we consider a reading of Albert Mackey's text on the subject of Faith as it pertains to … END_OF_DOCUMENT_TOKEN_TO_BE_REPLACED

In this edition of Freemason Information’s Symbols and Symbolism we consider, together, the four cardinal virtues of Freemasonry as gathered form Albert … END_OF_DOCUMENT_TOKEN_TO_BE_REPLACED