You are here: Home / Featured / Freemasonry and the Hermetic Arts 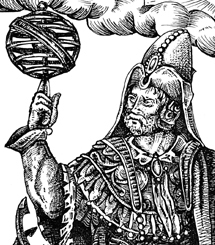 Masonic tradition has had a rich application of the notion that it is imbued with a Hermetic philosophy with very little explanation of what that means.  At no time, in the teachings of the fraternity, is a candidate or member handed a pamphlet, booklet or tract explaining what Hermetic has to do with masonry or how it pertains to the rituals of the degrees.  Further, no philosophical or religious tradition is said to be the linchpin of Masonic teachings and the esoteric institution of which they have obligated themselves.  The only glimpse of that teaching comes in the ritual use of the Bible as the Volume of the Sacred Law which can vary country to country, tradition to tradition, and initiate to initiate as the volume is suggested to be the book the candidate holds as holy.

The closest that this tradition of Masonry comes to teaching the meaning of the Hermetic art can be found in the teachings of the Scottish Rite, which for many years gave out to its members a large bound tome of Albert Pike’s Morals and Dogma instructing the candidate to read it, as able, so as to better understand the degrees.  But, because of its complexity, Morals and Dogma more often served as a door stop than a doorway to greater wisdom.

More recently, Pike’s 900 page manuscript of the occult sciences has been replaced with Rex Hutchens’s A Bridge to Light, which is a good and useful tool for the literal understanding of the degrees, yet still lacking in much greater depth than to suggest you, the reader, to go and research the greater meaning of the obtuse symbolism.

Perhaps this is an intentional lesson in resourcefulness for the true student, but for a greater understanding of the esoteric teachings it served as to great a bridge over the wisdom than as a path for the aspirant through the teachings.

Having followed the many paths of the esoteric science, one idea that repeatedly comes to the fore is that it is of a Hermetic philosophy.  Pike uses the term liberally in Morals and Dogma saying in the 28th degree

The Hermetic Art is, therefore, at the same time a religion, a philosophy, and a natural science. As a religion, it is that of the Ancient Magi and the Initiates of all ages; as a philosophy, we may find its principles in the school of Alexandria and the theories of Pythagoras; as a science, we must inquire for its processes of Paracelsus, Nicholas Flamel, and Raymond Lulle.[1]

So what exactly does the Hermetic Art mean to being a Mason?

The great teacher of the Hermetic Art is said to be Hermes Trismegistus better known as the Thrice Great Hermes of whom Pike makes a parallel to Grand Master Hiram in his third degree monograph.[2]

Who is Hermes, and why would his teachings be of any importance to a third degree Master Mason?

Through this series on the Hermetic Arts, I will explore those questions and try to create an association between the principal Hermetic text and the Hermetic principals which have wound their way into many esoteric teachings, but in particular those of Freemasonry.  To facilitate this understanding, we need to examine the principal Hermetic text from which the teachings of Hermes Trismegistus originate – Hermetica: The Greek Corpus Hermeticum and the Latin Asclepius.

While some may construe its teaching as religious, we need make our focus on it as the source materials from which much of the Western Esoteric Mystery traditions have drawn their teachings.  Yet, because of what it teaches, it would be impossible to interpret its writing without acknowledging it as religious text, complete with a creation myth, commandments of adherents, and ceremonies of inclusion for those who choose to devote themselves to its teachings, a practice that would be difficult to separate Freemasonry from in its religious practice of ceremonial ritual. Masonry, like most other mystery schools, has adopted aspects of the work, such as it has from other esoteric workings including tarot, magick, Kabbalah and of and New Thought ideas of life mastery.  In this undertaking of exploring Hermetica, our focus need be on its teachings so as to better improve the human condition towards those we come into contact with, which is at the heart of the Hermetic philosophy.

While the text of Hermetica contains what its authors suggest are certain truths, I leave to you their validation and weight, when taken in consideration of your own belief traditions.  In some instances, they may give you a path to better understanding your own beliefs or give you another way to look at what was before now an assumption of truth.  Over time, it has been said that Hermetica held aspects of religious mythology, early millennial Hellenistic religious ideals, Neo-Platonism, Sufism, Islam, Judaism, and Christianity but it is my belief that as the texts originated in an early period of the Common Era, their ideas stem from an older tradition that dates into late antiquity and perhaps the earliest of monotheistic Egyptian rituals of initiation and veneration.  Evidence of origin is difficult at best except when you consider its origins by lineage which, as Free Masons, we can find some heraldry to them as its modern day companions in practice.

At various intervals, Freemasonry itself has been called a hermetic science with seldom a satisfying explanation of what that means.  In part, the use of this type of language could be taken in scientific terms to imply a closed loop system of wisdom teachings – a self contained system, without influence or coloration to any other philosophical or religious tradition save what itself promulgates as the allegorical and symbolic lessons it teaches.

Yet, at various points in the Royal Art, of which Masonry has expounded itself as, includes moralistic teachings that, at their core, utilize Christian verse and meaning drawing upon Biblical allegories from the Great Book while introducing ideas from traditions that seem to spring from outside the age within which the Bible was conceived.

A few examples of this include the trans formative process in alchemy and the Jewish Mysticism of found in the Kabbalah which were later elaborated upon by writers of the great tradition of Free Masonry most notably in the works of Pike and Wilmshurst whom both injected their own ideas, by interpretation, into the tradition.  So true is it with this undertaking that one must suspend the idea of what it is we believe the Great work of Freemasonry teaches to explore another possibility.  From this exploration we can hopefully come to understand the later developments of the ancient idea of philosophical tradition not enclosed within itself – not as a hermetically sealed philosophy but a broader tradition of the philosophy (and perhaps religion) of Hermetica itself.  It is through a close reading of the Hermetic texts and an analysis by which we can produce an exegesis through a juxtaposition of the philosophy that comes from Hermetica and the lessons taught in the degrees to find, if it exists, a harmony between the two and reach a firmer understanding of what being a Mason means and how it, perhaps, colors our underlying ideas of morality, truth and faith.  Is the link between Hermetica and Freemasonry an accident that occurred in the attempt to mythologize a simple tradition of initiation and mystery play theatrics that has been carried forward religiously for centuries?  Upon closer interpretation of Hermetica, this does not seem to be wholly the case.

Sadly, there is no direct evidence of its association or of any such intention other than to compare the rituals of masonry and some of the possible conclusions that may be drawn from them in parallel to the Hermetic writings, in particular in the three craft degrees.  But, this is a speculative science, so then we must speculate and attempt to find parallels where we can.  In the mean time, while we ponder the deep questions,  of origin, source and meaning it is my hope that hope that we will discover a richness of tradition and possibly a new means to understand our own faith in a system of morality taught by symbolism and allegory.  That discovery, I believe, comes in understanding the ancient text of Hermetica.

Before we begin, the text used for this exploration comes from Hermetica: The Greek Corpus Hermeticum and the Latin Asclepius in a New English Translation, with Notes and Introduction

, with Notes and Introduction by Brian P. Copenhaver, which you can find at Amazon.com.

But, before we begin to examine the text of Hermetica, our first stop must need be with the well known Emerald Tablet, a codex of sorts said to codify the teachings of Hermes into a singular distillation of the main points of Hermetica itself.

As we progress ahead, you can be the judge of the Emerald Tablet’s points and their relevancy when compared to their supposed source material.

The tablet, as a translated work, can be found in its oldest documented source from  the Kitab Sirr al-Asrar, The Book of the Secret of Secrets, which is a 12th century translation of a 10th century Arabic text which included subjects on many areas of interest to the contemporary mystery school student including ethics, astronomy, magic, and alchemy.  Elements of the text are believed to have circulated well before their compilation into the Kitab by several hundred years.[3]

This portion of the greater text is a compendium of advice for rulers, believed to be a letter from Aristotle to Alexander the Great.  The work has had many translators over the centuries ultimately producing the work we read below.

The Emerald Tablet of Hermes – Contemporary Rendering of Latin text

END_OF_DOCUMENT_TOKEN_TO_BE_REPLACED

Raised to a Master Mason in 1908, at Harmony Lodge No. 17 in Washington, DC, Carl H. Claudy  served as the Master and eventually as Grand Master of Masons … END_OF_DOCUMENT_TOKEN_TO_BE_REPLACED

In this final installment of the Faith Hope and Charity series, we consider the symbolism of charity, or perhaps better called love. It is this attribute that … END_OF_DOCUMENT_TOKEN_TO_BE_REPLACED

In this installment of the Symbols and Symbolism of Freemasonry, we examine the text of Albert Mackey's Encyclopedia of Freemasonry on the symbolism of … END_OF_DOCUMENT_TOKEN_TO_BE_REPLACED

In this installment of the Symbols and Symbolism of Freemasonry, we consider a reading of Albert Mackey's text on the subject of Faith as it pertains to … END_OF_DOCUMENT_TOKEN_TO_BE_REPLACED