You are here: Home / Tim Bryce / Let’s Sit Down and Talk

– The need for some simple, candid discourse. 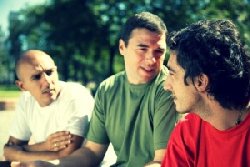 Once a week, I sit down with a group of friends after work for a little get-together. The purpose is simple, to just talk. Eight people regularly attend, but there are a few others who drop by from time to time to listen in and add their two cents. We’ve been doing this for about five years now and find it more rewarding than any other meeting we attend. Actually, it’s quite therapeutic and something I highly recommend.

It all started accidentally. As the secretary of a nonprofit organization, I periodically visit the office after work to check the mail and process paperwork. Following this, I would make it a point to visit with the former secretary, who was my mentor, at his home nearby. At first, we would simply talk about what was going on in our nonprofit, and the events of the day. After awhile, I invited one of the other officers to accompany me to the secretary’s house. Then another, and another, until we had eight people. Let me be clear, this is no “club,” as much as it is a simple get-together of men with common interests.

Over time our discussions grew to cover a wide range of subjects: politics, religion, love, friendship, death, sports, humor, youth, aging, aches and pains, history, military experiences, morality, dining, just about anything was up for grabs. Often I would review an article I was working on and ask for their feedback which would lead to some lively discussion. Personally, I find such discourse invigorating. Someone may also review a news item, read a story, a book or poem, or possibly something from the Internet. Our discussions are always civil and from the heart. Do we agree on everything? Hardly, particularly politics and religion, but this is what makes the group lively and interesting. Afterwards, we always shake hands in friendship.

I think I can safely say, on behalf of all members of the group, these weekly get-togethers are more meaningful than the meetings at our nonprofit. We can argue, laugh, but more importantly try to understand the other person’s point of view and what is important to each of us. We’re not so much concerned with developing a camaraderie, as much as to apply mental gymnastics and enjoy each other’s company. If it was a matter of choosing between this meeting and our nonprofit, the nonprofit would undoubtedly lose.

I have mentioned this forum to other people who expressed admiration, even envy. Some women friends in particular find it interesting when I describe it. They may have several girlfriends, but they never speak with such intimacy as our group does. This is a shame as I believe we all need an outlet to express our views. Certainly we will discuss such things with our spouse, but to be among people of common interest where you can open the kimono, reveal a part of your soul, and know that your privacy will be maintained, can be very rewarding. I believe it to be analogous to an AA meeting without the addiction. There is something about the banter, discovering the commonality of experiences, and the different perspectives that makes this meaningful. This is certainly not the place to reveal your deepest and darkest secrets, which may embarrass yourself as well as others, but to simply talk about anything openly and candidly.

If I had to give some advice as to how to start such a group, there are three things to consider: inviting the right people, selecting the venue, and appointing a moderator.

Inviting the right people is very important and I suggest discretion, particularly in the early stages until the group is functioning smoothly. You do not want to invite just anyone, you want to select people with a common focus; people you trust, respect, enjoy their company, and will contribute to the group. You certainly do not want a clown who will distract it. I suggest you develop a core group first and invite others after the implied rules have been established. Such rules should not be written as too much formality will defeat the purpose of the meeting, which is to simply meet upon the level. So, start small and add members like a snowball until you reach a manageable number. The most people we’ve ever had at our get-togethers is ten, but that is rare.

Consideration should be given to selecting people based on gender. I have learned over the years, there are things men will only tell other men, and I suspect the same is true between women. This may not be a hard and fast rule, but you should give it some serious consideration.

Next, selecting a suitable venue is important. Since we reside in Florida, most of our get-togethers are spent on a screened lanai. We come inside only when it is too cold or rainy, but that is rare. We might also enjoy some libations and perhaps a good cigar, but I realize not everyone would enjoy such pleasures. Instead, invent your own but do not make it too lavish. Keep it simple so that it doesn’t become an annoying burden. Remember, your primary reason for attending is to talk, not snack. Pick a time and date that is convenient for everyone. In our case, it is usually after dinner in the middle of the week.

The last element is selecting a moderator, not someone who will govern with an iron fist, but rather someone who will help lead the conversation. In most cases, the conversation will control itself. Some gentle moderation though can be useful to regulate the conversation and provide everyone a chance to speak. In all of our discussions I cannot think of an instance where someone slandered another person’s opinion. We might not agree with a given point, and argue accordingly, but we certainly respect the individual’s opinion. I heartily encourage the use of a written paper, particularly a composition by someone in the group, be it an article, a letter to the editor, humor, something of historical significance, a book or poem, or whatever. By presenting such a paper, you are establishing a position and encouraging others to refute it. When you present such a paper, be prepared to accept criticism and learn from it.

About a year ago, one of our members brought his son to our group. He was on leave from the Air Force. We made him feel welcome and he sat with us as we discussed a wide variety of subjects. Throughout the discourse he remained silent, just observing the give and take. At the end, I asked him what he thought of our get-together. He said he was impressed by the number of things we discussed, our remarkable frankness, and that it was an excellent forum for a person to state his opinion without fear of retribution. He had never been involved in such candid conversations before and found it most stimulating.

Years ago, such discourse was valued in our society. People would discuss the events of the day on a soap box, in taverns, over a card game, or just between friends. Now, in this age of political correctness, such openness is discouraged and there are few chances for frank discussions. Most people today rely on the talking heads on television to form their opinions. As for my group, we would rather begin the dialog by simply asking, “What do you think?”

If you need help establishing such a group, please let me know.

NEXT UP:  HABITS – Positive or negative, we should be sensitive to excessive repetition.

LAST TIME:  YOUTH WILL HAVE ITS DAY  – Some disturbing social trends I have trouble understanding.