You are here: Home / Tim Bryce / When a Trust is Broken

– What should you do? Forgive or reciprocate? 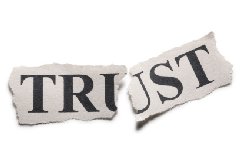 There is perhaps nothing more demoralizing to the human spirit than discovering a broken trust. What makes this particularly painful is when a person believes another has his/her best interests in mind and will defend them. This can be between two friends, business associates, school, in sports, in politics, or even within families. Inevitably one or both parties are surprised, thereby creating resentment and a rift between people inevitably ensues. If a lie is discovered, a promise broken, cheating, not being treated fairly, playing politics, an insult, or whatever, it can do irreparable harm. You may forgive, but you will never forget and it is unlikely you will ever treat that person the same.

We deal with such indiscretions in our own unique way, some through anger, some through humor, some through reciprocal action, or some simply ignore it. Frankly, I do not understand the latter alternative. I realize some people may violate a trust simply to get nothing more than a reaction from a person, which is perhaps the worst reason for violating a trust. However, the violation is plain and simply an insult to your honor and should be dealt with accordingly.

“Don’t get mad, get even.” I am not suggesting you stoop to the level of the person committing the indiscretion, but to simply return the favor more effectively than your antagonist. One way is to publicize the foul thereby discrediting the other person. Another is to report the person’s actions to the proper authorities, possibly even taking it to court. Aside from committing a similar foul to the other party, which I do not necessarily recommend, another option is to simply withdraw from the institution and leave the offender to his own devices. Understand this, by breaking the trust, the offender has already exhibited his feelings towards you. Forgive if you want, but the other person should instigate the healing process. Obviously, some things can never be forgiven.

I had a friend from Brazil who moved to the United States and was surprised by our dependency on lawyers to solve numerous petty offenses. When I asked him how he would handle someone who had cheated him, he replied he would simply throw a brick through his company’s front window. He rationalized it would probably cost the company more to replace the window as opposed to paying him back. I’m not sure I would agree with his approach but I certainly can understand his sentiments.

Whatever approach you use, first and foremost have confidence in yourself. Stand your ground and do not reduce yourself to the other person’s level. Some people go into a state of shock when the indiscretion initially occurs. They do not necessarily think clearly. Just simply take note of the facts involved with the situation, such as the time, date, place it occurred, and the people involved. Think through the problem, and devise a suitable solution. Regardless if it is forgiveness or retribution, consider the ramifications before deciding on a course of action.

This reminds me of the animosity between George Bernard Shaw, the famous playwright, and Winston Churchill. The two hated each other. Just prior to the opening of one of Shaw’s plays, he sent an insulting note to Churchill, “I am enclosing two tickets to the first night of my new play; bring a friend… if you have one.”

Churchill had the last laugh though by responding to Shaw, “Cannot possibly attend first night; will attend second, if there is one.”

Samuel Clemons (Mark Twain) came up with an interesting approach for clearing out the riff-raft in his life; he sent an anonymous telegram to a dozen of his friends saying, “flee at once – all is discovered.” They all left town immediately.

When someone breaks the trust, be sure to return the favor and do it with a little class.

END_OF_DOCUMENT_TOKEN_TO_BE_REPLACED

In this final installment of the Faith Hope and Charity series, we consider the symbolism of charity, or perhaps better called love. It is this attribute that … END_OF_DOCUMENT_TOKEN_TO_BE_REPLACED

In this installment of the Symbols and Symbolism of Freemasonry, we examine the text of Albert Mackey's Encyclopedia of Freemasonry on the symbolism of … END_OF_DOCUMENT_TOKEN_TO_BE_REPLACED

In this installment of the Symbols and Symbolism of Freemasonry, we consider a reading of Albert Mackey's text on the subject of Faith as it pertains to … END_OF_DOCUMENT_TOKEN_TO_BE_REPLACED

In this edition of Freemason Information’s Symbols and Symbolism we consider, together, the four cardinal virtues of Freemasonry as gathered form Albert … END_OF_DOCUMENT_TOKEN_TO_BE_REPLACED