You are here: Home / Masonic Traveler / Freemasonry, The Religion of Not Being a Religion 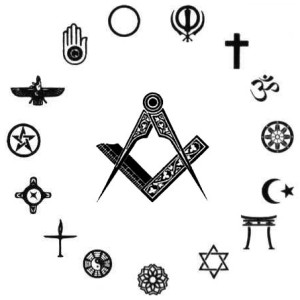 The following comes from a piece I wrote in 2007 on the Masonic Traveler blog. It addressed, at that time, question of Freemasonry being a religion. While the ideas may have evolved some over the years, the message in it seems to still bear some resonance in light of the question rearing its head once again.

Is Freemasonry a Religion?

What perplexes me is why does it matter? Why does answering the question even matter any more to the cackling hens of the I’m right your wrong neener neener neener bunch. They have their opinion, and to them, were just wrong and ALL going to hell. So, here is my hat, I’m coming into the ring….

The quick observational answer is no, Freemasonry is not a religion, in that it does not teach FAITH. It does, however, strive to bring a philosophical and allegorical set of ideas forward and, in that sense could be construed as one which requires the observer to separate the two from one another. Faith is separate from Religion.

The definition of religion(n) is:

1. a set of beliefs concerning the cause, nature, and purpose of the universe, esp. when considered as the creation of a superhuman agency or agencies, usually involving devotional and ritual observances, and often containing a moral code governing the conduct of human affairs.

2. a specific fundamental set of beliefs and practices generally agreed upon by a number of persons or sects: the Christian religion; the Buddhist religion.

3. the body of persons adhering to a particular set of beliefs and practices: a world council of religions.

5. the practice of religious beliefs; ritual observance of faith.

6. something one believes in and follows devotedly; a point or matter of ethics or conscience: to make a religion of fighting prejudice.

a. to acquire a deep conviction of the validity of religious beliefs and practices.

b. to resolve to mend one’s errant ways: The company got religion and stopped making dangerous products.

The definition of faith(n) is:

1. confidence or trust in a person or thing: faith in another’s ability.

2. belief that is not based on proof: He had faith that the hypothesis would be substantiated by fact.

3. belief in God or in the doctrines or teachings of religion: the firm faith of the Pilgrims.

4. belief in anything, as a code of ethics, standards of merit, etc.: to be of the same faith with someone concerning honesty.

5. a system of religious belief: the Christian faith; the Jewish faith.

6. the obligation of loyalty or fidelity to a person, promise, engagement, etc.: Failure to appear would be breaking faith.

7. the observance of this obligation; fidelity to one’s promise, oath, allegiance, etc.: He was the only one who proved his faith during our recent troubles.

8. Christian Theology. the trust in God and in His promises as made through Christ and the Scriptures by which humans are justified or saved.

Note the difference in word origins, religion comes from the latin root meaning to tie, fasten, bind. Faith’s origin is to trust.

The difference here is that in all of the writings in the past refer to Freemasonry in some way as a “religion” NOT as a faith. The problem today is that the fundamental argument that Freemasonry is a religion confuses the two and presumes that any religion must also be a faith. The difference here being that that assumption is false and the two are not dependent on one another.

Pike does say that Freemasonry is perhaps a representation of all religion in a passage from the 10th degree p161/162 saying:

Masonry is not a religion. He who makes of it a religious belief, falsifies and denaturalizes it. The Brahmin, the Jew, the Mahometan, the Catholic, the Protestant, each professing his peculiar religion, sanctioned by the laws, by time, and by climate, must needs retain it, and cannot have two religions; for the social and sacred laws adapted to the usages, manners, and prejudices of particular countries, are the work of men.

But Masonry teaches, and has preserved in their purity, the cardinal tenets of the old primitive faith, which underlie and are the foundation of all religions. All that ever existed have had a basis of truth; and all have overlaid that truth with errors. The primitive truths taught by the Redeemer were sooner corrupted, and intermingled and alloyed with fictions than when taught to the first of our race. Masonry is the universal morality which is suitable to the inhabitants of every clime, to the man of every creed. It has taught no doctrines, except those truths that tend directly to the well-being of man; and those who have attempted to direct it toward useless vengeance, political ends, and Jesuitism, have merely perverted it to purposes foreign to its pure spirit and real nature.

I suggest that Pike backs this up by saying on p.160, that the key is toleration, and without it, it becomes a pissing match for my faith is bigger than yours.

Toleration, holding that every other man has the same right to his opinion and faith that we have to ours; and liberality, holding that as no human being can with certainty say, in the clash and conflict of hostile faiths and creeds, what is truth, or that he is surely in possession of it, so every one should feel that it is quite possible that another equally honest and sincere with himself, and yet holding the contrary opinion, may himself be in possession of the truth, and that whatever one firmly and conscientiously believes, is truth, to him–these are the mortal enemies of that fanaticism which persecutes for opinion’s sake, and initiates crusades against whatever it, in its imaginary holiness, deems to be contrary to the law of God or verity of dogma. And education, instruction, and enlightenment are the most certain means by which fanaticism and intolerance can be rendered powerless.

Perhaps in its practice, but not as a dogmatic belief system with specifics to salvation.

Is Freemasonry tolerant of all faiths? Yes. Does that frighten, distance, and otherwise disenfranchise all fundamentalist ideologues? You bet your ass it does, which is why every organized dogmatically proscribed faith HATES and denounces Freemasonry.

Freemasonry is the religion of not being a religion. The faith of all faiths. It says no one faith is right, and no one faith is wrong, which is diametrically opposed to what any fundamentalist body wants to tell you is right.