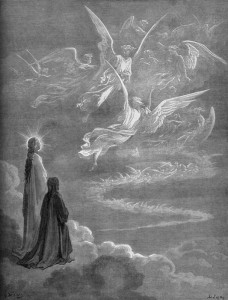 I had a dream not long ago.  And in that dream I passed to the Celestial Lodge above where I found myself just outside the Pearly Gates.  There was no St. Peter there to greet me but rather a Wayfaring man with shillelagh and lantern dressed in a cowled robe or tunic with the hood pulled up over his head.  So hunched over was he that I could barely see his eyes nor his lips move.

“You are a traveling man,” he said with a raspy voice.

“Yes I am and I guess I have traveled a long way,” I retorted.

“Can you prove it?” rasped the Wayfaring man.

“I am sure that I can demonstrate to anyone’s satisfaction that I am a Master Mason,” I replied.

“Where are we going?”

“To The Celestial Lodge.”

“The Celestial Lodge above, how nice.”

“No just the Celestial Lodge, you’re already above.”

As we left I tried to step off but I remained stuck to my place.  The Wayfaring man said, “You think your way along here.  Just visualize yourself following me.”

Sure enough I moved along effortlessly as if on one of those conveyor belts at the airport.

We arrived at our destination in a flash.  Before us was what looked like colored clouds of red, blue and purple hue, imprinted on which in navy blue iridescent almost glowing specks was the Square & Compasses. Is this what neon signs look like in heaven, I thought to myself?

“We don’t use the letter G up here,” replied the Wayfaring man. “What the letter G symbolizes is present in the East.  God does not need a symbol when God is.  The I Am Who I Am Is Who He Is.”

Wow, wouldn’t Bill Clinton have a field day with that line, I thought to myself.

As we got closer a booming voice queried, “Who comes here?”

“A traveling man who has passed through the Pearly Gates,” replied the Wayfaring man.

“Does he have the pass?” asked the booming voice.

“He shall wait until the Almighty is informed of your presence and His answer returned.”

Within a short period a woman in a lavender robe with white sparkling star sequins broke through the cloud mass and said, “You shall enter through the outer door to the anteroom.”

I shot a quizzical look at the Wayfaring man.

Reading my thoughts, he quickly answered, “We have fully implemented the lesson of the Level here.”

The clouds parted and I wondered if Moses was on the other side.  We entered the anteroom and the parted clouds shut again. A man was there to greet me and before I could speak he said, “No I am not Moses, I am Hiram Abiff and I am the Master of Ceremonies here to guide you through your next degree.”

“I have another degree to take,” I timidly asked.

“Yes my Brother, but first we must dispense with a few preliminaries, convey some information and then get you prepared.”

Brother Abiff asked for and received all the steps, signs, grips and words of the earthly degrees by thought.  Then he said, “I must ask you if you will proceed of your own free will and accord?”

“From whence you came, but there will be one stipulation.”

“You will not go back who you were there.  You will start over anew as someone else.”

“It is not predetermined but as you say back on earth, it is a roll of the dice.  You could go back a new person to China or Germany or India or Cuba or Uganda or anywhere.”

“And what would I do there?”

“Whatever you choose to do.  You see with free will you always have a choice.  Bad choices, however, usually yield bad results.”

“I think I would like to proceed right here.”

“I have made a good choice?”

“It is not for me to say.  One man’s garbage is another man’s treasure, as the saying goes. As you have probably noticed your body as well as ours is but an illusion.  The best description of what you are right now is pure energy.  As such instead of being unclothed or hoodwinked you will be powered down so that you can hear but not see.”

“No,” Brother Abiff replied.  “This is The LAST DEGREE.  Now follow your conductor and fear no danger.”

Next installment:  The Last Degree.