You are here: Home / Featured / Freemasons and the New World Order 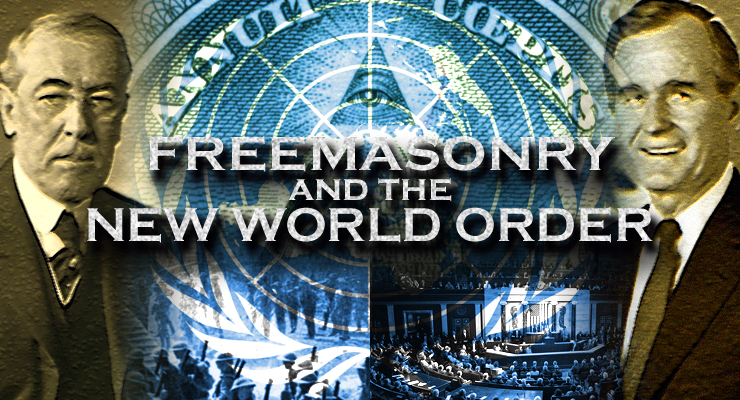 To the unassuming public, the Freemasons are a society of likeminded men who come together to donate and raise money for good and charitable causes. But is this really true? Is the government a component of an underground Masonic society whose whole organization is a plot to form a one-world government?

Let’s look at the evidence.

The one world government, also referred to as the New World Order, is a theory that a select few elite people have a globalist agenda and aspire to rule the world as an authoritarian world government. This will replace sovereign nations and states and every country will become one under the same government. Culled in modern times out of Woodrow Wilson’s speech to Congress on January 8, 1918, in his Fourteen Points statement of principles for peace, he called for a League of Nations on the heels of World War I. In his list, point XIV calls for the formation of:

A general association of nations must be formed under specific covenants for the purpose of affording mutual guarantees of political independence and territorial integrity to great and small states alike.

He closes that speech, saying:

An evident principle runs through the whole program I have outlined. It is the principle of justice to all peoples and nationalities, and their right to live on equal terms of liberty and safety with one another, whether they be strong or weak.

Unless this principle be made its foundation no part of the structure of international justice can stand.

George Bush, in 1991, took up the phrase in a speech to Congress, not ironically in reference to making the world safe. In the address, he said:

I come to this House of the people to speak to you and all Americans, certain that we stand at a defining hour. Halfway around the world, we are engaged in a great struggle in the skies and on the seas and sands. We know why we’re there: We are Americans, part of something larger than ourselves. For two centuries, we’ve done the hard work of freedom. And tonight, we lead the world in facing down a threat to decency and humanity.

What is at stake is more than one small country; it is a big idea: a new world order, where diverse nations are drawn together in common cause to achieve the universal aspirations of mankind — peace and security, freedom, and the rule of law. Such is a world worthy of our struggle and worthy of our children’s future.

He says further on,

We will succeed in the Gulf. And when we do, the world community will have sent an enduring warning to any dictator or despot, present or future, who contemplates outlaw aggression.

The world can, therefore, seize this opportunity to fulfill the long-held promise of a new world order, where brutality will go unrewarded and aggression will meet collective resistance.

Seemingly, this had less to say about world domination and more to insinuate peace, security and prosperity.

So where do the Freemasons come in?

Freemasonry and the New World Order 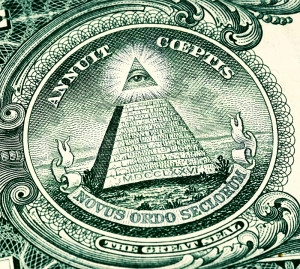 As one the world’s oldest secular fraternal organizations, the Freemasons have been at the heart or involved in a number of the world’s most pivotal moments. Let’s take the United States for example. The most powerful country in the world and yet on of the newest. George Washington and Benjamin Franklin were both Freemasons, and the influences of this society are seen throughout American state craft and culture.

Take a closer look at the Great Seal of the United States or the one dollar bill, The Great Seal bears the Latin phrase ‘novus ordo seclorum’ on the reverse, as proposed by non-mason Charles Thomson, translating to ‘new order of the ages.’

Yes, Ben Franklin was on one of the early committees to craft the early seal, but in the end, it was not his seal that was selected. Franklin’s seal, chose the more modest motto of “Rebellion to Tyrants is Obedience to God” Some believe that the final motto selected alludes to the phrase New World Order and is a preamble for “Freemasonry is the Church of Satan masquerading as a fraternal mystical philanthropic order.” and are “fronts for Illuminati (Masonic & Cabalist Jewish) central bankers who started the US as a vehicle to advance their New World Order” pinning the phrase to “Illuminati bankers [who] have been plotting the ‘new order of the ages’ (featured on the US dollar along with the uncapped Masonic pyramid) for thousands of years.”

Was the American government created with the purpose of one day becoming the one world government?

One of the main reasons that the Freemasons have been the subject of the New World Order theory is that they rejected the traditional and orthodox authority because it didn’t fall into line with their idea that all people were equal. Not just this, but Masonic societies around the globe been known to treat all people, regardless of religion, as equals. This belief is often seen as highly un-Christian and, therefore, made masons a focus for people who believe in the one world government.

But why are the Masons so secretive? What do they have to hide?

In this day and age where men and women are equal, why aren’t women invited to the Lodges all over the globe where these meetings take place? Many people believe that they are hiding something. Because of this secrecy, no one knows what really goes on except those who are involved in them. The Freemasons claim to be a charitable group yet they make no claims on the charities they donate to, and they ask for no official recognition. Why be so secretive?

Perhaps it comes out of another organization that has been linked to the Freemasons, the Illuminati.

The Illuminati was founded in 1776, which coincidentally is the same year that America became independent. The main focus and beliefs of the Illuminati was a mixture of several different religions, mysticisms and even heavily borrowed the Freemasons ideologies. The main goal — that they spoke about — was to make people happy and people could become happy by becoming good. They want people to reject judgment and prejudices and believe that everyone should out for everyone. Sound familiar?

The Illuminati and the Freemasons are closely linked, and their beliefs are very similar, and its founder tried to infiltrate his organization into the contemporary Masonic lodge, but Weishaupt’s dream never say its full manifestation. Despite this fact, this is another reason why many believe that, together, they are one organization working together to bring about the New World Order. Because they want everyone to be treated as equals regardless of status, religion, gender, race or background, people believe that they are looking to create a world in which everyone is the same. What better way to do this other than create a one world government? If one government ruled the entire world then none of those things would matter and people would be truly equal.

One of the other big reasons that people believe that Freemasons are looking create a one world government is because of what happened in the founding of the United States.

In the 1776, the United States of America didn’t exist. It was simply known as Mundus  Novus (New World) from a pamphlet written in 1503 by Amerigo Vespucci. The term was in opposition to the notion of an “old world” from which the age of exploration sprang. As the “new world” grew it took shape to include the 13 British colonies — each isolated from the other with degrees of different beliefs, different ideologies and even different religious practice (again, to a degree). They were made up of different races and ethnicities and all held widely differing political and societal beliefs. It was the organization by the Founding Fathers that sought to unify these disperate colonies under one government into a country that, after much bloodshed and heartache, would become known today as the United States. And what do we know about the founding fathers? That they were Freemasons. 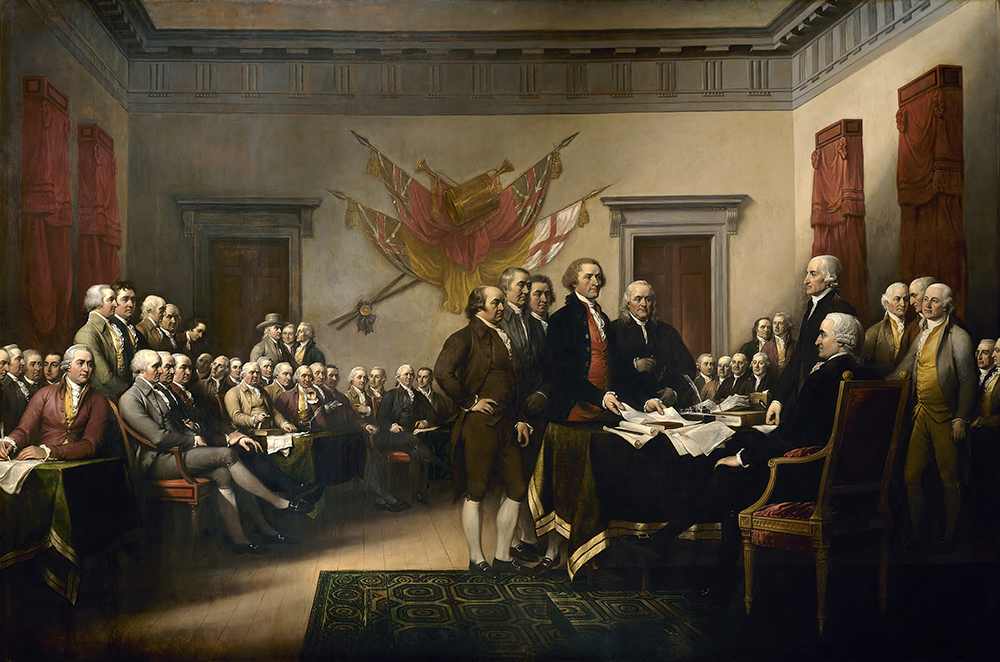 Obviously, none of these plans for world domination are proven fact.

Yes, the founding fathers were Freemasons and yes they did work together to unite the 13 colonies to become the United States. And yes, the Illuminiaiti sought to infiltrate European Masonic lodges to spread their ideology across the globe, but there is no real evidence that they did so because they wanted to rule the world under a “one world-government” despite what Wilson and Bush said in front of Congress to the American people (neither of whom were Freemasons).

The Freemasons are not a secret society, they are simply very traditional — a fact that many people don’t understand. And in that tradition, world domination is the last thing on its mind, unless that domination is in the form of doing good works and promoting civil society.

Ultimately, masons do a lot of good in the world and they do it without expectation of anything in return. There could stand to be a few more people who aren’t in it for the glory and just in it for the good of mankind. And really, if it were to come to light that they were looking to establish a world free of judgement a prejudices, would that really be the worst thing in the world?

END_OF_DOCUMENT_TOKEN_TO_BE_REPLACED

In this final installment of the Faith Hope and Charity series, we consider the symbolism of charity, or perhaps better called love. It is this attribute that … END_OF_DOCUMENT_TOKEN_TO_BE_REPLACED

In this installment of the Symbols and Symbolism of Freemasonry, we examine the text of Albert Mackey's Encyclopedia of Freemasonry on the symbolism of … END_OF_DOCUMENT_TOKEN_TO_BE_REPLACED

In this installment of the Symbols and Symbolism of Freemasonry, we consider a reading of Albert Mackey's text on the subject of Faith as it pertains to … END_OF_DOCUMENT_TOKEN_TO_BE_REPLACED

In this edition of Freemason Information’s Symbols and Symbolism we consider, together, the four cardinal virtues of Freemasonry as gathered form Albert … END_OF_DOCUMENT_TOKEN_TO_BE_REPLACED