You are here: Home / Tim Bryce / Do Just One Thing

BRYCE ON NONPROFITS
What can be done to rebuild declining nonprofit institutions?

Click for AUDIO VERSION.
To use this segment in a Radio broadcast or Podcast, send Tim a request. 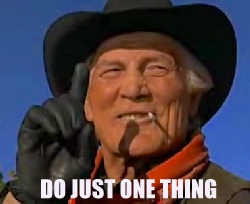 When I travel around town these days, I often run into old friends and neighbors who know my background regarding nonprofit organizations (I served on +50 board of directors over the years), and they like to unload their frustrations on me. For example:

It kind of sounds contagious, doesn’t it? So many different nonprofit organizations with similar problems.

In many cases, nonprofits are run by well meaning people who have some time on their hands, yet haven’t a clue as to how to run a business. Consequently, the execution of simple procedures are neglected, e.g.; the preparation of meeting agendas and budgets, issuing routine treasurer reports, auditing finances, or keeping accurate minutes and membership records. For a list of tasks, see my earlier article, “Managing a Nonprofit Organization.”

I guess I have become somewhat of a therapist on such problems as people continue to confide in me. I try to advise them accordingly, but the sad truth is the people running these organizations are frustrated and exhausted. They desperately want to hand the baton off to others, but there is nobody there.

Now and then in nonprofits, someone with a business background comes in, takes the bull by the horns, and does a good job with an assignment. The problem is, it is assumed the person will do it again next year, and possibly for eternity. With rare exception, this is not what people signed up for. To overcome this problem, ask the person to document the steps they used while they were in charge, perhaps through checklists, thereby documenting the procedure for future reference. The person thereby passes this knowledge on to the group overall, and someone else can perform the responsibility. Bottom-line, execution is fairly easy assuming planning is competently performed.

From my perspective, there are three fundamental problems facing nonprofits:

As to this last point of recruiting support, during my talks to such groups I generally admonish all of the attendees to “Do just one thing.” This is derived from Billy Crystal’s movie, “City Slickers,” whereby Curley (Jack Palance) tells Billy’s character the meaning of life involves “Just One Thing” which we must all figure out for ourselves. In terms of nonprofit organizations, I think I have an answer:

If all members did “Just One Thing” for their club, it would be a better place. I am not suggesting we do anything extremely labor intensive; perhaps it is something as simple as being a greeter at the door, preparing name tags, attending a meeting or social function, helping to write letters, or just helping out in some simple way. If we all did “Just One Thing,” the institution overall would be a better place.

Something that might help is the creation of a “Member of the Year” competition based on points for service, and award prizes or special recognition at the end of the year for their service. It sounds trivial, but people react to such competitions. Simply devise a list of activities with related points, and have people notify an officer of their activities.

Where is it written the club Officers must do all of the work? Sure, they have many responsibilities, but it is the job of the officers to formulate objectives and set the membership to work towards some goals. I am amazed by those members who come to such clubs and are not happy with this or that. For example, how often have you seen a member criticize the club, yet make no attempt to lift a finger to help out? We have developed into a generation of “takers” as opposed to “givers,” and this has to stop. Before you criticize next time, figure out how YOU are going to help solve the problem. Do not be part of the problem, be part of the solution.

I guess the following quote sums it up:

It is up to the membership, not just the Board of Directors, to each share in the responsibility of making our clubs successful. If we all did “JUST ONE THING,” be it large or small, think how far ahead we will be.

Tim Bryce is a writer and the Managing Director of M&JB Investment Company (M&JB) of Palm Harbor, Florida and has over 40 years of experience in the management consulting field. He can be reached at timb1557@gmail.com

Listen to Tim on WZIG-FM (104.1) in Palm Harbor,FL; Or tune-in to Tim’s channel on YouTube. Click for TIM’S LIBRARY OF AUDIO CLIPS.

END_OF_DOCUMENT_TOKEN_TO_BE_REPLACED

Raised to a Master Mason in 1908, at Harmony Lodge No. 17 in Washington, DC, Carl H. Claudy  served as the Master and eventually as Grand Master of Masons … END_OF_DOCUMENT_TOKEN_TO_BE_REPLACED

In this final installment of the Faith Hope and Charity series, we consider the symbolism of charity, or perhaps better called love. It is this attribute that … END_OF_DOCUMENT_TOKEN_TO_BE_REPLACED

In this installment of the Symbols and Symbolism of Freemasonry, we examine the text of Albert Mackey's Encyclopedia of Freemasonry on the symbolism of … END_OF_DOCUMENT_TOKEN_TO_BE_REPLACED

In this installment of the Symbols and Symbolism of Freemasonry, we consider a reading of Albert Mackey's text on the subject of Faith as it pertains to … END_OF_DOCUMENT_TOKEN_TO_BE_REPLACED