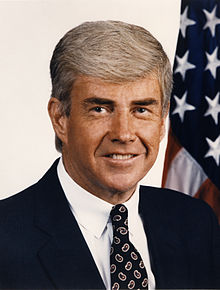 A former star quarterback for the San Diego Chargers and the Buffalo Bills, Kemp held, at the time of his retirement from professional football, three all-time AFL career records: for 3,055 pass attempts, 1,428 completions, and 21,130 yards gained passing. The Bills permanently retired his number 15. Kemp cofounded the American Football League Players Association and was its president from 1965 to 1970.

Kemp  was an ardent supply sider, one of President Reagan’s top economic advisors and co author of the Kemp-Roth tax cuts so identified with the Reagan Presidency.  He ran unsuccessfully ran for President in 1988.