Today is the time for my annual Patriot’s Day message, an obscure holiday celebrated only in Middlesex County, Massachusetts. But it is where I grew up – right smack dab in the middle of Revolutionary War history. Later I was to learn how important a role Freemasonry played in our fight for freedom from the British.

If you are a regular reader perhaps you have heard this story before. My apologies for the reiteration. At the same time I can’t help think that are always so many new readers of Freemason Information that it is worth repeating. Here is an address I gave in colonial costume as I toured Massachusetts and other states to acquaint them with the lore of Masonic Revolutionary War history.

I was raised in Plymouth Lodge, Plymouth Massachusetts where the Pilgrims landed. About two years later I affiliated with Paul Revere Lodge in Brockton, Massachusetts where I reside. Soon after I joined the Paul Revere Colonial Degree Team. We perform the 3rd Degree in the Colonial dress you see me wearing tonight. We march into Lodge to the beat of our drummer and two flags, one our Colonial Degree Team flag with the bust of Paul Revere and the other the Betsy Ross American Flag. We perform the degree using the ritual of today and afterwards our Historian gives a patriotic message pointing out the contributions that colonial Masons made so that we might have the liberties we enjoy today. He also talks about the sacredness of the American flag and what it stands for. Then he introduces each member of the degree team and we each introduce the Masonic Revolutionary War hero whom we represent. You see each one of us takes the name of a Mason who fought to secure us freedom from the British. And we each spend about 30 seconds explaining our colonial forbear. When I joined the Colonial Degree Team all the names that had been researched by the Director were taken, names like George Washington, Ben Franklin, Paul Revere, Henry Knox and John Hancock. I asked if I could research my own Colonial Mason who I would represent.

Having been granted permission my thoughts quickly went to my childhood. I was born and brought up in the town of Lexington, MA where the first battle of the Revolutionary War was fought on April 19, 1775; the battle of Lexington and Concord and “the shot heard round the world”. When I was 5 years old my father died leaving my Mother to bring up my two sisters and me by herself. She took three jobs to support us, secretary to the First Parish Church bordering the Lexington Green, two nights a week as secretary to the town’s Planning Board and on weekends as tour guide at the Buckman Tavern which also borders the Green.

Let me give you a picture of the Lexington Green shaped like a triangle with the point in the East. And in the East at that point is the Minuteman statue of Capt. John Parker the commander of the Lexington Minutemen. In the Northeast corner is the Buckman Tavern where the Minutemen gathered early in the morning of April 19, 1775. In the Northwest corner is the Masonic Temple where I served as Master Councilor of Battle Green Chapter Order of DeMolay. In the West is the First Parish Church where I went to church and my mother was Secretary. And in the South The Hancock Congregational Church. I can remember as a small boy of about 8 sitting on the front steps of the Buckman Tavern and listening to my mother through the screen door talk to the tourists about the ride of Paul Revere and the Battle of Lexington. 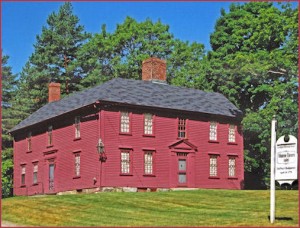 proprietor of Munroe Tavern, the other tavern in town. This building also still stands today 100 yards down the street from the Scottish Rite Museum of Our National Heritage. Munroe Tavern was unfortunately taken over by the British and used as a command post on April 19, 1775.

I traveled into Grand Lodge, to the Library and read the Grand Lodge minutes of 1797. And when William Munroe approached the East of Grand Lodge to deliver his request for a charter, the Grand Master who received him was Most Worshipful Paul Revere. William Munroe was the first and founding Master of Hiram Lodge, which met for over 40 years at the Munroe Tavern.