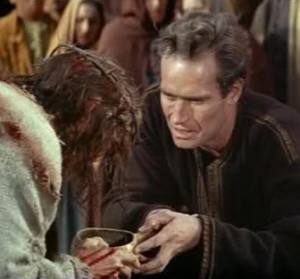 One of my favorite scenes in any movie occurs at the climax of the classic film Ben-Hur. During the scene where Jesus is carrying his crucifix through Jerusalem, he collapses underneath the weight of his burden. As Simon of Cyrene is ordered by the Roman soldiers to pick up Jesus’ cross, Judah Ben-Hur (played by Charleton Hesston) pushes through the crowd to give the man they call ‘King of the Jews’ a drink of water.

What I find so beautiful about this scene is that it is the purest form of worship. At this moment, Charleton Hesston’s character is devoid of dogma or religious opinion. He knows that he is witnessing a moment of great realization and does not try to rationalize it or explain it. He only feels the power of the event and offers his praise for the gift of enlightenment which he is receiving.

While the movie is portraying a fictional aspect of the story of Jesus’ crucifixion, it is also providing the piece of the story which is so desperately yearned for when reading the Biblical account of the event. None of the Gospels speak of any assistance given to Jesus during his crucifixion. They are all in agreement that Mary Magdalene remained faithful to him at the end, but we only read of the disciples betraying Jesus. Judas Iscariot had betrayed him and Peter had denied knowing him. Certainly the others would continue proselytizing men to become Christians later, but where were they at the darkest time for their Lord? Were they too busy writing down what they saw and forming the doctrine for their new religion? It is an easy thing to speak of faith, it is another thing to actually have it.

The character of Ben-Hur has nothing to offer the man in suffering, whom he has come to regard as the messiah. However, he throws himself before him with the only offering that he can provide. This is a beautiful action and properly displays the pure realization of truth. In that moment when we discover truth, we can neither define nor rationalize our feelings. We can only find ourselves on our knees in wide-eyed awe of our new understanding.

In many ways, it reminds me of the Masonic process of coming to light. I was only able to truly accept a great realization once in my Masonic career and that was during my first degree. This was because I had no idea of what to expect, I thought of nothing and only focused on the moment. When I was brought to light, it was a truly transcendent moment and it really did change the course of my life. However, after the first degree I had an idea of what to expect and was simply too busy trying to anticipate my next step rather than accept the truth as it came to me.

Perhaps that is the greatest challenge facing the craft today. Are we too busy anticipating the next step in the fraternity’s future and developing a plan to fill our lodges with members? Are we too concerned with the mistakes that the organization has made today and how to fix them? Do we put too much effort into making sure that the recitation of ritual is perfect without understanding the truth which it teaches? Do we rush to research the ritual’s deeper meanings in order to fill volumes rather than letting the realization come to us?

Masonry embodies pure worship. It only offers lessons which are left to its initiates to decipher. It has no dogma and is not concerned with the particular beliefs of its individual members. Perhaps we as Masons must be like Ben-Hur. In our moment of realization, we may have little to offer Masonry, but let us offer whatever we can to the fraternity with sincerity. It is not for us to define the fraternity or propound upon its value to the profane world. What we must do is recognize its truths not with words, but with action.

Lineage in 6 minutes.  Its not so much a deep discovery, but there are enough familliar names in here to be followed and tracked down to get a good perspective of the Hermetic philosophy.