You are here: Home / Education / Books / Morals and Dogma / Knight of the East 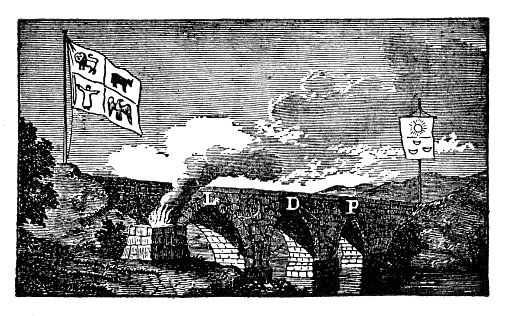 KNIGHT OF THE EAST OR OF THE SWORD

Knight of the East, of the Sword, or of the Eagle

THIS Degree, like all others in Masonry, is symbolical. Based upon historical truth and authentic tradition, it is still an allegory. The leading lesson of this Degree is Fidelity to obligation, and Constancy and Perseverance under difficulties and discouragement.

Masonry is engaged in her crusade, against ignorance, intolerance, fanaticism, superstition, uncharitableness, and error. She does not sail with the trade-winds, upon a smooth sea, with a steady free breeze, fair for a welcoming harbor; but meets and must overcome many opposing currents, baffling winds, and dead calms.

The chief obstacles to her success are the apathy and faithlessness of her own selfish children, and the supine indifference of the world. In the roar and crush and hurry of life and business, and the tumult and uproar of politics, the quiet voice of Masonry is unheard and unheeded. The first lesson which one learns, who engages in any great work of reform or beneficence, is, that men are essentially careless, lukewarm, and indifferent as to everything that does not concern their own personal and immediate welfare. It is to single men, and not to the united efforts of many, that all the great works of man, struggling toward perfection, are owing. The enthusiast, who imagines that he can inspire with his own enthusiasm the multitude that eddies around him, or even the few who have associated themselves with him as co-workers, is grievously mistaken; and most often the conviction of his own mistake is followed by discouragement and disgust. To do all, to pay all, and to suffer all, and then, when despite all obstacles and hindrances, success is accomplished, and a great work done, to see those who opposed or looked coldly on it, claim and reap all the praise and reward, is the common and almost universal lot of the benefactor of his kind.

He who endeavors to serve, to benefit, and improve the world, is like a swimmer, who struggles against a rapid current, in a river lashed into angry waves by the winds. Often they roar over his head, often they beat him back and baffle him. Most men yield to the stress of the current, and float with it to the shore, or are swept over the rapids; and only here and there the stout, strong heart and vigorous arms struggle on toward ultimate success.

It is the motionless and stationary that most frets and impedes the current of progress; the solid rock or stupid dead tree, rested firmly on the bottom; and around which the river whirls and eddies: the Masons that doubt and hesitate and are discouraged; that disbelieve in the capability of man to improve; that are not disposed to toil and labor for the interest and well-being of general humanity; that expect others to do all, even of that which they do not oppose or ridicule; while they sit, applauding and doing nothing, or perhaps prognosticating failure.

There were many such at the rebuilding of the Temple. There were prophets of evil and misfortune–the lukewarm and the in-different and the apathetic; those who stood by and sneered; and those who thought they did God service enough if they now and then faintly applauded. There were ravens croaking ill omen, and murmurers who preached the folly and futility of the attempt. The world is made up of such; and they were as abundant then as they are now.

But gloomy and discouraging as was the prospect, with lukewarmness within and bitter opposition without, our ancient brethren persevered. Let us leave them engaged in the good work, and whenever to us, as to them, success is uncertain, remote, and

contingent, let us still remember that the only question for us to ask, as true men and Masons, is, what does duty require; and not what will be the result and our reward if we do our duty. Work on, with the Sword in one hand, and the Trowel in the other!

Masonry teaches that God is a Paternal Being, and has an interest in his creatures, such as is expressed in the title Father; an interest unknown to all the systems of Paganism, untaught in all the theories of philosophy; an interest not only in the glorious beings of other spheres, the Sons of Light, the dwellers in Heavenly worlds, but in us, poor, ignorant, and unworthy; that He has pity for the erring, pardon for the guilty, love for the pure, knowledge for the humble, and promises of immortal life for those who trust in and obey Him.

Without a belief in Him, life is miserable, the world is dark, the Universe disrobed of its splendors, the intellectual tie to nature broken, the charm of existence dissolved, the great hope of being lost; and the mind, like a star struck from its sphere, wanders through the infinite desert of its conceptions, without attraction, tendency, destiny, or end.

Masonry teaches, that, of all the events and actions, that take place in the universe of worlds and the eternal succession of ages, there is not one, even the minutest, which God did not forever foresee, with all the distinctness of immediate vision, combining all, so that man’s free will should be His instrument, like all the other forces of, nature.

It teaches that the soul of man is formed by Him for a purpose; that, built up in its proportions, and fashioned in every part, by infinite skill, an emanation from His spirit, its nature, necessity, and design are virtue. It is so formed, so molded, so fashioned, so exactly balanced, so exquisitely proportioned in every part, that sin introduced into it is misery; that vicious thoughts fall upon it like drops of poison; and guilty desires, breathing on its delicate fibers, make plague-spots there, deadly as those of pestilence upon the body. It is made for virtue, and not for vice; for purity, as its end, rest, and happiness. Not more vainly would we attempt to make the mountain sink to the level of the valley, the waves of the angry sea turn back from its shores and cease to thunder upon the beach, the stars to halt in their swift courses, than to change any one law of our own nature. And one of those laws, uttered by God’s voice, and speaking through every nerve

and fiber, every force and element, of the moral constitution He has given us, is that we must be upright and virtuous; that if tempted we must resist; that we must govern our unruly passions, and hold in hand our sensual appetites. And this is not the dictate of an arbitrary will, nor of some stern and impracticable law; but it is part of the great firm law of harmony that binds the Universe together: not the mere enactment of arbitrary will; but the dictate of Infinite Wisdom.

We know that God is good, and that what He does is right. This known, the works of creation, the changes of life, the destinies of eternity, are all spread before us, as the dispensations and counsels of infinite love. This known, we then know that the love of God is working to issues, like itself, beyond all thought and imagination good and glorious; and that the only reason why we do not understand it, is that it is too glorious for us to understand. God’s love takes care for all, and nothing is neglected. It watches over all, provides for all, makes wise adaptations for all; for age, for infancy, for maturity, for childhood; in every scene of this or another world; for want, weakness, joy, sorrow, and even for sin. All is good and well and right; and shall be so forever. Through the eternal ages the light of God’s beneficence shall shine hereafter, disclosing all, consummating all, rewarding all that deserve reward. Then we shall see, what now we can only believe. The cloud will be lifted up, the gate of mystery be passed, and the full light shine forever; the light of which that of the Lodge is a symbol. Then that which caused us trial shall yield us triumph; and that which made our heart ache shall fill us with gladness; and we shall then feel that there, as here, the only true happiness is to learn, to advance, and to improve; which could not happen unless we had commenced with error, ignorance, and imperfection. We must pass through the darkness, to reach the light.

END_OF_DOCUMENT_TOKEN_TO_BE_REPLACED

Raised to a Master Mason in 1908, at Harmony Lodge No. 17 in Washington, DC, Carl H. Claudy  served as the Master and eventually as Grand Master of Masons … END_OF_DOCUMENT_TOKEN_TO_BE_REPLACED

In this final installment of the Faith Hope and Charity series, we consider the symbolism of charity, or perhaps better called love. It is this attribute that … END_OF_DOCUMENT_TOKEN_TO_BE_REPLACED

In this installment of the Symbols and Symbolism of Freemasonry, we examine the text of Albert Mackey's Encyclopedia of Freemasonry on the symbolism of … END_OF_DOCUMENT_TOKEN_TO_BE_REPLACED

In this installment of the Symbols and Symbolism of Freemasonry, we consider a reading of Albert Mackey's text on the subject of Faith as it pertains to … END_OF_DOCUMENT_TOKEN_TO_BE_REPLACED