The second section of the Fellowcraft degree has a reference to the origin of the Jewish Sabbath. as well as the manner in which it was kept by our ancient brethren, which altogether escapes notice except as a passing Biblical reference. The fact is that it is one of the most important of the ancient cabalistic secrets of the Magian brotherhood all over the world.

Six thousand years ago the oriental mystics were satisfied among themselves that they had fathomed the complete riddle of the universe in the interesting mathematical and geometrical system that, among other things, has bequeathed the symbolism of Masonry to us. The chief secrets of the ancient ceremonies of initiation were connected with the science of astronomy.

Holy Writ tells us that “in six days God created the heavens and the earth and all that in them is.” Involved in the ancient idea, however, were many circumstances well known to the seers of old, which have become lost in the lapse of ages. From the very earliest period down to the, present time each one of these days has borne the name of one of the seven planets known to the ancients, and always that of the same planet to the same day, no matter how often the name of the latter has been translated from one tongue to another.

In the Biblical order of creation, God created the light on the first day, which is that of the sun.

On the second day he caused “the expansion dividing the waters,” which really refers to the influence of the moon upon the tides as well as that of the sun in evaporation.

The third day vegetation came forth, which was anciently connected with the planet Mars, in the sign of the Ram, which is what so closely associated the figure of a lamb with the beginning of spring and the rebirth of vegetation after the winter’s sleep. 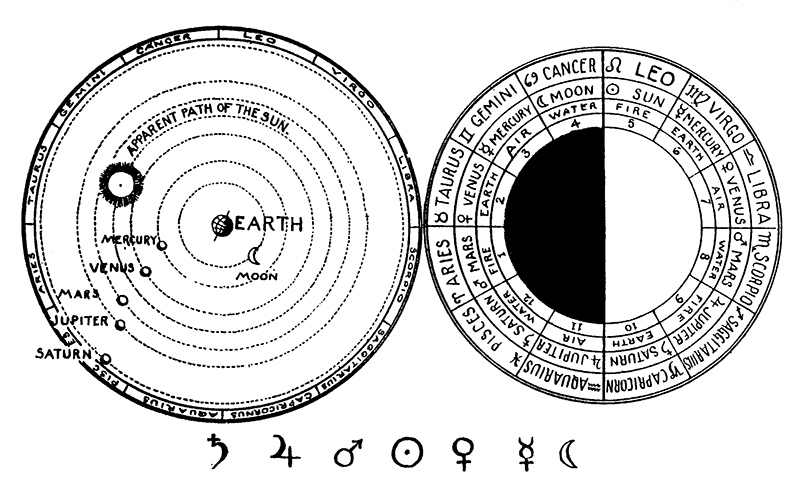 The “Geocentric” system which is at the bottom of all the old astronomical myths, taught that our Earth was the immovable center of the Universe. With the above fallacy allowed for these figured illustrate the ancient conception of out solar system. The Chaldean order of the planets is also shown.

On the fourth day, or that of Mercury, God said, “Let there be lights in the expansion of the heavens, to divide between the day and the night, and let them be for signs and seasons, days and years.” This made Mercury, who was Nebo and Hermes, the patron of all the ancient arts and sciences, and thus it was that the Chaldean order of the planets (Saturn, Saturday ; Jupiter, Thursday ; Mars, Tuesday ; Sun, Sunday ; Venus, Friday; Mercury, Wednesday ; Moon, Monday) was converted into the septenary division of the calendar week and an astrological system introduced which gave to the first hour of each day the influence of its planetary namesake, followed by that of the next on the list, until the seven had been used up . Then the list began again, with the planet of the first hour as that of the eighth, 15th, and 22nd hours, and so on, in succession through the entire 168 hours of the seven-day week.

The first day of creation was naturally that which we now call “Sunday.” One has only to run the Chaldean planetary order through the 24 hours of each day, beginning with the sun, in the first hour of Sunday, to discover that the correct planet begins each day.

A ready explanation for the total cessation of the Semitic world from all labor on the day of Saturn would be found by astrologers in the malefic astrological aspect of that planet, as the author of all evil and misfortune, of pain, sickness, and disaster, upon whose appointed day the benign creative influences desisted from all exertion and which should be employed most usefully in supplicating the Creator to avert the miseries entailed upon mankind by this most unpropitious of planets.

There is a curious and entirely physical reason to be given for the fact that the three planets, Saturn, Jupiter, and Mars, constituted the great creative trinity of Brahma, Vishnu, and Siva among the Hindus in the Far East, but the powers of evil throughout the western world. Students of astrology will remark the fact that they are the rulers of the whole six astrological houses (signs of the Zodiac) from Scorpio to Aries, therefore governing the winter season.

This is very different above the equator from that below, and so we must expect conceptions of its ruling planets widely different in the north from the tropics, and especially through the ages when the depth of winter lay in Pisces, a “house” of Saturn. So, when these three planets were first encountered, as the rulers of the three final winter months, which slew the fertility of the year, they were deemed three assassins or “ruffians,” with, as terminations to their names, the old Aryan symbols of Brahma, Siva, and Vishnu – A, U (or O), and M.

Contents – The Beginning of Masonry
Previous – Circumambulation
Next – The Letter “G”