It is quite possible for the hero of a popular legend to be at once real and unreal. The real character will be or has been the indistinct historical personage about whom, when sober sense is allowed to assert itself over sentimental enthusiasm, we must admit we know little or nothing based upon profane history or archeological remains. On the other hand, the poetry and song of an inspired race have often wrapped their national aspirations about some chance-indicated figure and produced a demigod. 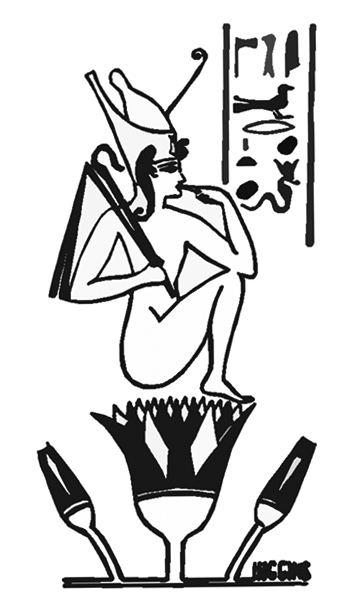 Ehoohu the Egyptian god of the Mysteries

Our three ancient operative Grand Masters are representative of both these two classes in an eminent degree. Of their historical proportions we are poorly informed; but of their undying fame there is ample guaranty. Upon the universal mystery hypothesis, they represent at one and the same time the powers that direct the forces of terrestrial nature and those which reign over the soul of man.

Their ritualistic associations with the three divine attributes, Wisdom, Strength, and Beauty, link them almost automatically with the three ancient names most intimately associated with these qualities, –  Solomon of Israel Melkarth the Tyrian Hercules and Adonis the Syrian Apollo (whose name whose name forms part of that of Adoniram or Adonhiram, “the Lord Hiram”) . The name Adon was synonymous with Baal or Bet, meaning “Lord;” the name Melkarth was composed in part of Melech, “King.” If we were speaking in terms of Greek or Roman mythology, we should call these three personages simply Helios (or Sol), Hercules, and Apollo. The latter pair is the zodiacal sign of Gemini, the twins, who with the Hermes of Virgo constitute the threefold or Thrice great Hermes of ancient philosophy, astronomically the planet Mercury. 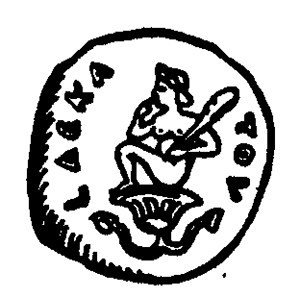 The child Horus on an Alexandrian coin of the Caesars.

These apparent individual parts were deemed by the priests to represent but attributes of the Creator; but even as such, they were the particular attributes most intimately associated with the creation and destiny of man, whose chief ornaments and distinctions from the baser creations about him were endowments of this same Wisdom, Strength, and Beauty, in which resided his likeness to his Divine Maker. Wisdom was the special solar attribute.

The life story of the Ego lends itself aptly to an allegory in which these three supreme divine gifts figure in the leading roles. The distribution of emblems to the three principal lodge officers tell a story in itself.

The three squares that are the symbols of the three ancient operative Grand Masters are three angles of 90 degrees, a total of 270, the mystery number of human existence, derived from the days of gestation.

The square, alone, is the symbol of creative wisdom, the plumb of the upright stature of the living man, and the level the recumbent posture of death, closely assimilating the three stations with the original Aryan symbolism of Brahma the Creator, Vishnu the Preserver, and Shiva the Transformer . It is significant that of these three qualities Beauty should be singled out as the eternally perishing and eternally reviving quality of the manifested universe. The modern scientist tells us that all matter consists of vortices of positive and negative electrons, revolving round each other with incredible speed, the emanations of the Infinite Mind arranging themselves into harmonious forms, determined by the same Infinite Mind.

Here is the analogy in a nutshell: The determining Wisdom is always there, the Infinite Power is always present; the form alone is perishable and displays the alternate phenomena that we call “birth” and “death,” although the essence is deathless.

This is the true significance of the mystery deaths of all of the beautiful nature-gods such as Osiris, Dumuzi, Tammuz, Dionysus, Adonis, Atys, a host of diverse racial names, but one and the same representation of the same cosmic fact,-that the sole thing of all creation that perishes or “dies” as we misunderstand death, is the quality of form, perceptible to the material senses. It is this one of our three Grand Masters that displays the pattern upon the trestle-board from which, once executed, it will be erased to make way for another. It is this one that is symbolized by the sun poised but an instant at the meridian ere its descent to the portals of the west begins. It is this one that, with finger pressed on lip, guards with his very existence the secret of his art until the capstone of the edifice he is charged to erect- shall be placed in position and the whole work dedicated to its glorious ultimate purpose in the counsel of the Most High.

Truly, at the approach of winter storms and icy blasts, the trestle board of Nature’s Temple is void of directions for the workman and the plans of Divine Wisdom and Power inoperative in the absence of the manifesting syllable of the creative word! There is but one substitute in the ordering of matter from chaos to form; for the handiwork of the Great Architect himself and the secret lies in the triple square of the Supreme Three, “Man.”

The mystery of human life.