Students on the alert for signs of Masonic import in the relics of bygone ages will find them in many unexpected corners, if they know what they are and how to recognize them.

The artistic and architectural canons of the ancient world were all based upon systems of geometrical squares like those of a chessboard and the figure we have already discussed in connection with the lodge floor. An alternately colored and white paved work long ago acquired the name of Mosaic pavement, associating it with the great Hebrew seer and lawgiver, and particularly with the tradition of such a pavement having been the “pattern” exhibited upon the holy mount and alluded to in Exodus xxiv:10,

And they saw the God of Israel; and the place under his feet was like a paved work, of brilliant sapphire, and like the color of heaven in clearness.

There are two eminently Masonic allusions in this verse, one to the pavement, and the other to the blue color, which has always been symbolic of the Hermetic philosophy; whence our “Blue” lodge, for instance.

As we might well be astonished at the frequent Biblical references to Deity in language that might be applied to a gigantic man, we must seek an explanation for them in the well authenticated philosophy of the ancients, to the effect that the Universe really was the great first-created man, who, being the pattern established by God and termed the Macrocosms or “great harmony,” was reproduced in multitude of the microcosms or “lesser harmony.” Every fiber of the being of each individual comprised in the latter class was an emanation or duplication in miniature of the stupendous original model. The language of Freemasonry cleverly conceals these ancient conceptions, ‘because ancient initiation revealed them in detail. The whole philosophy of the “Word” (the Greek term for which Is Logos) turns upon the organization of these harmonies from the original chaos in which “the earth was without form and void.”

We have thus a poetic imagery of the manifesting Deity exhibiting to the 70 elders, convoked for the purpose, the mechanical basis of this “harmony,” something wherewith and whereon to reason out and apply, in imitation of Divine handiwork, to constructing monuments of human genius.

This inference is more than heightened by the following language of Exodus xxvi:40, where, after having been given complete directions for the Tabernacle and its contents, they were admonished.

And look that thou make them after their pattern which thou wast shewn on the mount.

To the un-directed eye no other elements can be found in this expanse of square plane surfaces than the horizontal and perpendicular lines of their composition, joined at right angles as they cross one another. 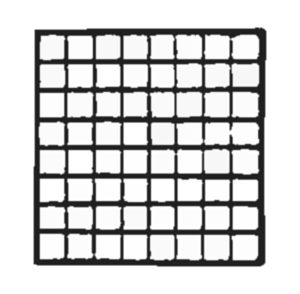 Geometers all know, however, that by these networks of squares might be demonstrated nearly all the known harmonies of Nature; for, while every intersection of a horizontal with a perpendicular line is a center upon which the immovable leg of the compasses may he placed, any such center will be a point within a series of circles circumscribing the similar centers at any selected distance round it, while lives drawls from the center so chosen to the points on the circumference where the circle crosses the intersecting line will divide such a circle into segments, which are exact equal divisions on the age-old scale of 360 degrees.

All this sounds very technical: but there is really no other way of describing something that will prove simple to the student sufficiently interested to experiment with it.

The result of adhering to this process is to procure exact scales of numbers, which are termed by scientists cosmic quantities because they are found to be the exact numbers present in the various phenomena of Nature that may be described in mathematical or geometrical terms.

Every number connected with our measurements of time is a cosmic number, beginning with the 7 of our weekdays, the 12 of our months, the 24 of our hours, the 52 of our weeks, the 60 of our minutes and seconds, the 28 days of our lunar month, the 30 days of our mean solar month, the 365 days 6 hours of our solar year, and above all the 72 years, 2,160 years, and 25,920 years during which the solstices and equinoxes travel backward through a degree, a sign, and the whole circle of the ecliptic respectively. The subdivision of the ecliptic from 12 signs into 36 decans (36 groups of stars (small constellations) which rise consecutively on the horizon throughout each earth rotation) is another cosmic number, the 270 days of human gestation another. The precise intervals of the revolutions of the principal planets round the sun give rise to others.

In fact, so precise and corresponding are these numbers (which we are constantly obliged to repeat when we are telling the story of the heavenly mechanism) with the numbers produced on these mazes of right-angled, horizontal, and perpendicular lines, that the dimensions and proportions of all the old Temples, dedicated to the glory of the Great Architect of the Universe, from the earliest pyramids to the cathedrals of Europe, are but exemplifications of this remarkable fact. We may go still further and show embodied in this remarkable system the several squaring of the circle, the visual demonstration of the squares, cubes, and roots employed in higher mathematics, all of which enter into the great harmonies of the universe and translate some strange energy into what we know as “heat,” “light,” “sound,” “force,” and mark off the periods that chop eternity into what our senses know as “time.”

There are no discords in Nature. All creation is indescribable in other terms than those of square and compass.

Many books have been written to prove that the Great Pyramid was built according to minute and learned calculations, showing all the principal facts about our earth and solar system ; yet the most simple analysis of this stupendous monument shows that the perpendicular axis of 10 parts, at right angles with a horizontal 16, the mathematical formula of which is 10, 5+6 +5, or Jod-Heh-Vau-Heh, is all there is in the world necessary to repeat the cosmic wonders of the Great Pyramid.

Isaiah was a real Mason. 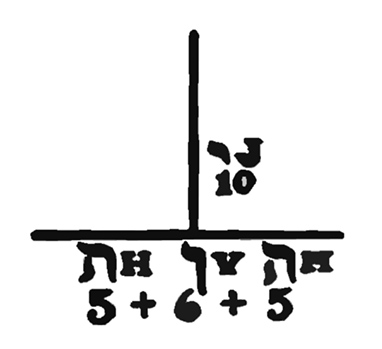 The Name of God Expressed Geometrically

Contents – The Beginning of Masonry
Previous – Angles
Next – Circumambulation