No single term associated with the hidden mysteries of ancient Freemasonry is so fraught with significance as this one “cardinal point” of the terrestrial compass. If we had no other means of surmising the common origin and purport of the world’s philosophical and religious mysteries, we should still be driven to associate them with the worship of “Light” and the solar source of light by the universal orientation of temples and other sacred edifices, from the most archaic of Druidical stone heaps to the cathedrals of our own day, to the direction in which the sun daily presents its rising glory to mankind. No matter when or where, the story is always the same, and when we come to understand it rightly the reasons stand forth in a widespread ancient knowledge of many of the intimate details of Nature’s inner workings.

That the sun rising in the east, to be the glory and beauty of the day, was one of the principal reasons for so placing sacred edifices that the first beams of the King of Day would enter into his holy house amid Earth’s rejoicing, there can be no gainsaying; but it is equally true that this consideration is far from completely covering the question.

The two Latin words, Orient, the East, and Occident, the West, seem to have been derived from roots signifying the “Path of Gold” and the “Dying” or “Killing.” The first is poetic, and apparently easily understandable; while the second refers to the several phenomena of nightfall and midwinter, which are always, associated with the sun sinking in the West.

The organizers of the Mysteries did not leave things to chance. However vague some of their speculations might have sounded in the ears of the people, they were themselves dealing in as exact science as they were able to command. Hence, while the terrestrial “East” was ever in the direction of the rising sun, a direction that describes a complete circle with every recurring twelvemonth, the celestial or true East was permanently situated in the sign of the zodiacal lion, or Leo, the “House of the Sun.” In every part of the world we always find the four cardinal points associated with the four elements; East, Lion, fire; South, Eagle (Scorpio) water; West, man, air; North, Bull, earth.

We must therefore, if we are seeking to know the true significance of Masonic directions or points of the compass, look not to our perpetually moving earth, but to the relatively immovable ecliptic or circular path, round which terra firma wends its way, past the 12 way-stations (months) on its beaten track, each 30 degrees in extent and defined by a constellation of fixed stars, figuring one of the supposed animal signs of the Zodiac.

We must conceive of the universe as a whole, a gigantic being of mind, parts, and functions, so analogous to our own that we can perceive what is meant by man’s being “created in God’s own image.” All this, to the ancients, was the manifestation of an ultimate and unmanifested power. The animating force of this vast harmony was the Sun, distributing its creative and energizing impulses by means of radiant light, and as this light carried with it the intelligence requisite to the due performance of its varied tasks, an active intelligence was deemed to reside within the luminous solar envelop, which (the manifestation, Word, or Logos of the unmanifested God) created and sustained the world and all living organisms. This Word was the great and sacred four-lettered word of the Hebrews, JHVH.

It can be proved by countless circumstances that JHVH was the secret God of the whole ancient world; only the Hebrews divested Him of the idolatrous, and often licentious and obscene rites with which He was hailed by many pagan nations. The famous number-letter philosophies of the ancient world were means by which JHVH was shown to be the source of every human science and contemplation. As the planets shone with light borrowed from the central sun, so they were, as subordinate gods, spirits or archangels, but the distributors for the central intelligence, whom the Chaldean Magi called IAO, the Heptaktis, or seven-rayed god. The true name of Deity was not a word simply, but a number, pronounced as a word, JHVH, or 10+5+6+5, or “26,” Jehovah. The four cardinal signs being the second, fifth, eighth, and eleventh, 2+5+8+11 equaling 26, so these four signs represent the revealed word of God, in Christian symbology, as the symbols of the four Evangelists, taken from thee visions of Ezekiel and Daniel. Relics of these four cardinal-point symbolisms, which really mean Jehovah, which were the true meaning of the Winged Bulls and Lions of the Assyrian temples and palaces, are scattered throughout the ruins of antiquity. There are twelve zodiacal signs of 30 degrees each, in all.

The Wise Men of the East, computing the precise length of the solar year of 365 days, 6 hours, centuries before Sosigenes, the Babylonian Jew, sold this ancient secret of his race to Julius Caesar, divided each of the 30-degree divisions of the ecliptic by one of these numbers in succession, which gave them “JHVH, JHVH, JHVH,” the triple Godhead or Trinity. Rearranging these letters into “HJH HVVH VJHJH” (this should be written in Hebrew letters), they saw before them the wonderful definition of the G. A. 0 . T . U., which has come ringing down the centuries. “He that was,” “He that is,” and “He that will be” in 3, 4, and 5 letters (the formula of the 47th problem).

We have already given the formula of Shamash, the Babylonian Sun-god, as the physical envelop of the purely spiritual JHVH (640 plus 26). The Sign of the Lion, the “Lion of the tribe of Judah,” for J 10, U 6, D 4, A 1, H 5, is only another way of making “26,” the “House of the Sun.” This is the true Masonic East, toward which the earth and all the planetary bodies voyage, in search of life, light, spring, and summer, and from which they turn Westward toward death, darkness, and winter. The Greek and Roman mythologies are only thinly veiled travesties of the great Eastern Nature Mystery cult, and many of the sacred words thereof which we find on ancient monuments, coins, etc., are also numerical cabalisms. One of the greatest of these, the word Oriens, the spiritual “East,” puts us directly upon the connection ; for its numerical value is 0 6, R 100, 110, E 5, N 50, S 200, = 371, which is 365 plus 6, the cabalistic key to the God of ISH-RA-AL (Man-Sun-God). 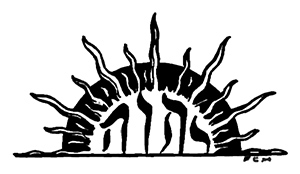