Given, as our point of departure, the analogy between lodge and universe as the theater of a drama of human development, it is not difficult to take the next logical step and show the various characters of the Masonic legend to be but personifications of celestial influences. 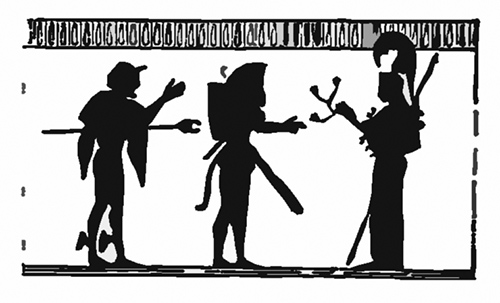 Minerva Investing the two Hermes (Mercury and Hercules) with the symbol of 3×3. From a Greek vase 3,000 years old.

The oldest archaeological remains of both the Babylonians and the Egyptians show that the chief actors in their Mysteries were personifications of the seven planets visible to the naked eye, which are symbolized by the; menorah or seven-branched candlestick, and the 12 animal figures that represented corresponding months of the year . It has been said that the ancients never inquired what caused rain or thunder; but that their questions were “Who rains?” and “Who thunders?” and when they were answered “Jove,” their curiosity was quite satisfied.

Therefore the inception of all legendary lore belongs to a time when the human was still primitive, but when, nevertheless, vague glimmerings of true science were beginning to knock for admission into his wondering mind. The very hard word anthropomorphism (meaning, according to learned definition, “the representation of the Deity in the form of a man, or with bodily parts : the ascription to Deity of human affections and passions”) had to be invented, from the Greek words meaning “man” and form,” to describe just what we must understand when a whole assemblage of gods is presented to us as residents of some vast Olympus, Walhalla, or other heavenly domain, in which they walk and talk, love and hate, commune and quarrel, like mortals below.

The real secret of the ancient priesthoods and wise men who stood sponsors for this system was that all the varied figures of whom they discoursed so eloquently and who inspired the lyre of a Homer and the chisel of a Praxiteles were but the philosophical attributes of a single undivided, omnipotent, omnipresent Being who delighted to live, thus veiled, from His creatures.

Thus the universe itself, “that in which we live and move and have our being,” was the true manifestation of Deity, and every one of its many discernible parts was one of the emanations or attributes of Divinity, executing His mandates as though with separate intelligence.

In pursuance of this grand and all-embracing conception, the Mysteries confronted their candidates, successively, with all the various figures chosen, impressing them one by one, until the final revelation that they but constituted a stupendous Unity, a beautiful, perfect, and complete Whole.

Nothing more suitable or appropriate could have been chosen than the ever-recurring story of the year, from its joyful beginning to its tragic end and miraculous resuscitation by the divine hand. Every age and race during thousands of years has had its own particular version of this great annual cosmic drama, so easily recognized by the arithmetical quantities of its leading characters,-three for the chief characters, seven for the next in rank, and twelve for the group for which the Greeks invented the significant name of “chorus.”

The great genius of Israel consisted in taking the selfsame elements from which were constructed all the ancient paganisms and erecting the wonderful and significant allegory of the building of King Solomon’s Temple, a figure of the co-operation between God and man, in the building of the House eternal of the future, from the coarse matter of – present environment and possibilities.

We can scarcely imagine what the religions of humanity must have been like before the inception of this cosmic science; for it is the wellspring and fountain of every manner and method of religious expression in all times and places of which we have any knowledge. There is no known name of Deity that is not a hidden clue to the perfection of the universe, from a geometrical or mathematical viewpoint, while the “Ministers of God,” unveiled, are those great processes of generation and regeneration which are going on everywhere about us.

If the lodge, therefore, represents the universe, it also represents in their several stations as did the priests in the holy places of old, to exemplify and explain the mysteries of God’s working through Nature, above and below .

The triple character of the principal officers of the lodge is significant in the extreme. Those who are prone to imagine that the mystery of the Trinity is a sectarian dogma have but to examine the subject more particularly to discover a triple aspect of unity in Deity that is as old as human thought and belongs to the infancy of civilization . The Jews possess it, as deeply rooted as any other people, in their cabalistic philosophy of the universe, worked out in the letters of the Hebrew alphabet, used mathematically, as Jod, Heh and Vav. As the ancients combined astronomy with philosophy in elaborating those wonderful cosmic dramas which have focused the human mind with reverence upon our Creator, so during many millenniums the chief ambassador of Deity to man, “the messenger of the Gods” was the spirit of the planet Mercury, closest to the sun, which, ever rising above and falling below the latter, sometimes appears as “morning” and sometimes as “evening” star, and often passes through “the lion’s skin,” the fiery corona of his celestial master, King Sol-Om-On.

The twins Gemini are the two last-named aspects of Mercury, the Divine Beauty and the Divine Power (or Strength), Apollo and Hercules; while the sign of Virgo, which the ancient Hebrews assigned to the tribe of Naphtali, is the astrological “day house” of Mercury, whose Greek name is Hermes (the Divine Wisdom), from the Egyptian Chr-Amun, translated by the Phoenicians into Khurum and the Hebrews into Hirm. Hercules, the great God of Phoenicia, was by the Tyrians called Melkarth, King of the City (of Tyre).

Therefore we at once perceive the warrant for the Hermes of Gemini, the Hermes of Virgo (the “conductor of souls”), and the Apollo who (Dumuzi, the Tammuz of the Semites, and the Adonis of the Greeks) was made by them to tell the story of the year and the transient character of all beauty in nature; which, notwithstanding its utter destruction during the winter months, forever revives at the call of the Master’s Word.