You are here: Home / Masonic Traveler / Glenn Beck – The Illuminati is going to off him…

Chris Hodapp over on Freemasons for Dummies does a terrific job of capturing the exchange of Glenn Beck and David Barton, from the Wallbuilders ministry organization, on the Fox News Channel in an exchange over the Founding Fathers and Freemasonry.

As Br. Chris captures the exchange perfectly, there seemed to be more misinformation given than factual info.  See for yourself in this clip from the program.

I won’t get into the facts of the program, but as discussed by Barton such as Washington’s sincerity in Masonry, his lodge activity, or the difference between American and European Masonry at the time.  One document I will point you towards is The Origin of Freemasonry written by a contemporary of Washington, one amongst the pantheon of founding fathers, Thomas Paine.  I’m sure Barton may glean much from this short work. 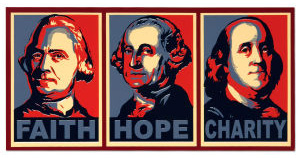 As for Beck, if you haven’t’ paid close attention to his program lately, he has laid a foundation of the Founding Fathers atop the gestalt of Faith, Hope, and Charity even promoting it so far as to create his own university of the triumvirate as the great virtues.  Samuel Adams as Faith, George Washington as Hope, and Franklin as Charity which unmistakably two of the three were prominent Freemasons, one of whom was a Grand Master of Freemasons in Pennsylvania in 1734.

But, to Beck, the principals of Faith, hope, and Charity (as seen on these products) are the principals that, he says, are Christian principals which Beck has tied to American Principals and supports with the edifice of the founding fathers.  He’s developed it to a point that he’s formed his own Beck University to impart them.  While the ideas behind these great social virtues are rightly extolled, what Beck missed is that Faith, Hope, and Charity were ideas adopted into Freemasonry as three tenants by which the Mason were to strive for, but not I would argue, in the way Beck suggests.

Faith – a faith in the divine, the Great Architect, the primitive idea of deity that all men can agree, founded on the Golden Rule, the principal of Do unto others as you would have done to you.

Hope – As an idea that stretches into antiquity as an evil released from Pandora’s Box which entered the world to torment man.

Charity – Is a simple idea that translates to the agape styled love, a fraternal brotherly love towards mankind, which facilitates the other two.

These are three subjects I cover in much greater detail in the book Masonic Traveler.

So, if Beck and Barton won’t brush up on their Masonic history maybe you can help let him know and send him an email to me@glennbeck.com with your thoughts about it.

END_OF_DOCUMENT_TOKEN_TO_BE_REPLACED

In this installment of the Symbols and Symbolism of Freemasonry, we consider a vital emblem of Freemasonry, the compass or compasses. Albert G. Mackey, in his … END_OF_DOCUMENT_TOKEN_TO_BE_REPLACED

Raised to a Master Mason in 1908, at Harmony Lodge No. 17 in Washington, DC, Carl H. Claudy  served as the Master and eventually as Grand Master of Masons … END_OF_DOCUMENT_TOKEN_TO_BE_REPLACED

In this final installment of the Faith Hope and Charity series, we consider the symbolism of charity, or perhaps better called love. It is this attribute that … END_OF_DOCUMENT_TOKEN_TO_BE_REPLACED

In this installment of the Symbols and Symbolism of Freemasonry, we examine the text of Albert Mackey's Encyclopedia of Freemasonry on the symbolism of … END_OF_DOCUMENT_TOKEN_TO_BE_REPLACED