If Manly P. Hall’s Secret Teachings had a companion book, I think that Richard Smoley and Jay Kinney’s Hidden Wisdom: A Guide to the Western Inner Traditions 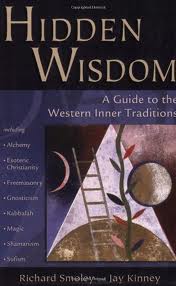 Every bit as dense as Hall’s Secret Teachings but much more down to earth and embedded in the “real” rather than the idealized reality – which is saying a lot. For most who take the journey of exploring the esoteric side of life, its can very fast become a confused mess of who’s who and what group is doing what. And, while Hall’s book looked at the big picture ideas of the Traditions, Smoley and Kinney’s gets to the heart of the matter, like a topographical map leading the curious reader through the forest of ambiguous trees of mystery traditions, esoteric groups, magical workings, and alien abductees. Literally, the book covers in some grounded aspect topics ranging from Hiram Abiff to Zoroastrianism.

Originally published in 1999, the work links many a missing connection in my own mind to things that I had only started to consider as connected and delved into areas of the Western Tradition that I had disassociated all together, including the workings of Gurdjieff or the more contemporary mix and matching of the New Age spirituality movement. Both of these are modern day examples to a Tradition that the authors trace all over the planet for the contributions of our present tense here and now.

Why do we overlay the Kabbalah with the ideas of Yogananda? And just how influential was Gnosticism to other Christian Mysticism or the Rosicrucian’s? How is the growing Neopagan movement allied to the conscious egotism of the Church of Satanism’s Anton LaVey? And it explores the disconnection between Islam and Sufism, two traditions born from the same peoples with radical differences.

What the Hidden Wisdom does not do, perhaps for good reason, is attempt broader connections between these disparate ideas as doing so would make it a commentary of opinion rather than a guide book to the esoteric traditions. Quite literally the work takes the reader step by step through the pantheon of what is considered the Western Mystery Tradition without validating or invalidating their ideas.

I think if given the opportunity, each of the chapters could themselves be evolved into books unto themselves, as the material they cover is rich and full of depth. It’s because of that depth that the Hidden Wisdom takes on the attributes of an Encyclopedia though written in the very easy to read language as that of an interesting history professor. The work is truly that intelligent and engrossing. And, if the written material isn’t enough to satisfy the curiosity, the books offers nearly 20 pages of Bibliographical reference for further inquiry.

In finishing this book my only wish about it was that I had come across it years ago when I first set foot upon this path of discovery. I would highly recommend the work to anyone just starting out or years into their discovery as it lays out the connections and origins so often glossed over in the source material of many of western traditions themselves. I can say, it will sit right besides Hall’s Secret Teachings as the go to source check in grounding the ethereal with the material origins.

You can find the book Hidden Wisdom: A Guide to the Western Inner Traditions