You are here: Home / Masonic Traveler / Possessed by the Devil of Commercial Avarice 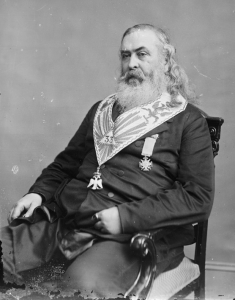 I take great wisdom from Albert Pike. When taken in portion, his writings in Morals and Dogma strike me almost a prophecy along the lines of Nostradamus or the Oracles of Delphi. It was in a deep reading of his work on the third degree that I found the passages below.

In navigating his writing in his Magnum Opus under the third degree, these gems of political observation ring true today probably more than they did in the nearly 150 years ago. I was at once shocked with a twinge of amusement that Pike foresaw perhaps the situation within which we find ourselves today. And in his writing he looks to Masonry as part of the remedy for it, but with his own cryptic warning about looking to the society of builders.

It was a problem America, and the world perhaps, is faced with today which is that those in charge are “possessed by the devil of commercial avarice” which he describes as being the point when “a nation becomes possessed with a spirit of commercial greed, beyond those just and fair limits set by a due regard to a moderate and reasonable degree of general and individual prosperity.”

Pike delves the subject deeply, without the realization that what he would write about could (or would) be happening.  But, in the subtext of his work, maybe he saw that it could happen.

When the thirst for wealth becomes general, it will be sought for as well dishonestly as honestly; by frauds and overreaching, by the knaveries of trade, the heartlessness of greedy speculation, by gambling in stocks and commodities that soon demoralize a whole community. Men will speculate upon the needs of their neighbors and the distresses of their country. Bubbles that, bursting, impoverish multitudes, will be blown up by cunning knavery, with stupid credulity as its assistants and instrument. Huge bankruptcies, that startle a country like the earth-quakes, and are more fatal, fraudulent assignments, engulfment of the savings of the poor, expansions and collapses of the currency, the crash of banks, the depreciation of Government securities, prey on the savings of self-denial, and trouble with their depredations the first nourishment of infancy and the last sands of life, and fill with inmates the churchyards and lunatic asylums. But the sharper and speculator thrives and fattens. If his country is fighting by a levy en mass for her very existence, he aids her by depreciating her paper, so that he may accumulate fabulous amounts with little outlay. If his neighbor is distressed, he buys his property for a song. If he administers upon an estate, it turns out insolvent, and the orphans are paupers. If his bank explodes, he is found to have taken care of himself in time. Society worships its paper-and-credit kings, as the old Hindus and Egyptians worshiped their worthless idols, and often the most obsequiously when in actual solid wealth they are the veriest paupers. No wonder men think there ought to be another world, in which the injustices of this may be atoned for, when they see the friends of ruined families begging the wealthy sharpers to give alms to prevent the orphaned victims from starving, until they may find ways of supporting themselves.

This seems to be speak directly to the efforts of the Occupy Wall Street protestors in New York, and now around the country over the “heartlessness of greedy speculation, by gambling in stocks and commodities…” who have “ruined families.” Has anyone questioned the patriotism and loyalties of the companies and banks that continue to benefit while those whom they prey continue to inch into “distress?”

Pike goes on to say:

We should naturally suppose that a nation in distress would take counsel with the wisest of its sons. But, on the contrary, great men seem never so scarce as when they are most needed, and small men never so bold to insist on infesting place, as when mediocrity and incapable pretense and sophomoric greenness, and showy and sprightly incompetency are most dangerous.

Like a call for action, Pike declares the need for the Masonic principles saying:

So much the more necessity for Masonry!

War has not ceased; still there are battles and sieges. Homes are still unhappy, and tears and anger and spite make hells where there should be heavens. So much the more necessity for Masonry! So much wider the field of its labors! So much the more need for it to begin to be true to itself, to revive from its asphyxia, to repent of its apostasy to its true creed!

So how does Masonry fit into this troubling world? As a Master Mason, it is the lesson of the third degree itself, Pike says:

Masonry seeks to be this beneficent, unambitious, disinterested guide; and it is the very condition of all great structures that the sound of the hammer and the clink of the trowel should be always heard in some part of the building. With faith in man, hope for the future of humanity, loving-kindness for our fellows, Masonry and the Mason must always work and teach.

We have to step back a bit to see Pike’s concern about this responsibility when he talks about Faith, Hope, and Charity saying:

These forces are within the reach of all men; and an association of men, actuated by them, ought to exercise an immense power in the world. If Masonry does not, it is because she has ceased to possess them.

An association of men? Masonry perhaps?

END_OF_DOCUMENT_TOKEN_TO_BE_REPLACED

Raised to a Master Mason in 1908, at Harmony Lodge No. 17 in Washington, DC, Carl H. Claudy  served as the Master and eventually as Grand Master of Masons … END_OF_DOCUMENT_TOKEN_TO_BE_REPLACED

In this final installment of the Faith Hope and Charity series, we consider the symbolism of charity, or perhaps better called love. It is this attribute that … END_OF_DOCUMENT_TOKEN_TO_BE_REPLACED

In this installment of the Symbols and Symbolism of Freemasonry, we examine the text of Albert Mackey's Encyclopedia of Freemasonry on the symbolism of … END_OF_DOCUMENT_TOKEN_TO_BE_REPLACED

In this installment of the Symbols and Symbolism of Freemasonry, we consider a reading of Albert Mackey's text on the subject of Faith as it pertains to … END_OF_DOCUMENT_TOKEN_TO_BE_REPLACED