You are here: Home / Reviews / An 86 Year Old Book Review 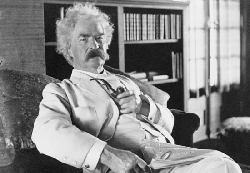 Looking for something to read, I went back into my library and pulled out a copy of The Autobiography of Mark Twain

which I have had since High School.

I’ve always been an admirer of Samuel Clemens’ work, but I have to admit I balked at taking his autobiography seriously years ago. This time though, I was in the proper frame of mind and wanted to know more about the renowned author and humorist, not so much about the facts and history of his life, but more about his perspective of the times. I wasn’t disappointed.

The book was originally published in 1924 (fourteen years after Twain’s death) and basically consists of sketches describing his life spanning the years from 1835 to 1910, which is known as a very rich period of American history. He describes life prior to the Civil War, his involvement during the war, and the expansion west. I found his narratives of life in the Midwest, both as a child and an adult, particularly colorful and interesting. Clemens did a remarkable job describing life as a boy living on a farm. His description of the foods of the period made me hungry and I could vividly visualize the school he attended and life on the farm.

I’m afraid African-Americans will not be too happy with the book as Twain uses the “N” word liberally, but not maliciously. It was just the way people talked back then. There was no ulterior motive for using the word, nor venom in his language, it was simply a snapshot of the times. Nonetheless, African-Americans may call for the book to be banned from schools if they read it.

As a writer, I found his rich vocabulary, sentence structure, and punctuation particularly interesting. It was much different than what I am used to in the 21st century. Unlike today where we typically try to gorge ourselves on a novel as expeditiously as possible, Twain’s style forces the reader to slow down and savor each sentence. You can tell that it was written by a craftsman intimate with the English language.

His humor is also different. Instead of today’s “in your face” approach to comedy, Twain mischievously takes the reader down an unknown path where he inevitably springs a humorous conclusion on you. It is not backslapping funny, just elegant humor very tastefully presented. His anecdotes are always designed to teach a lesson and cause a chuckle in the process.

I wanted to read his autobiography, not so much to learn about his family history, which he volunteered reluctantly, but more to understand his perspective of the times which I found was essentially no different today than 100 years ago.

He made a few comments that particularly caught my attention; the first was the cycle of life, to wit:

A myriad of men are born; they labor and sweat and struggle for bread; they squabble and scold and fight; they scramble for little mean advantages over each other. Age creeps upon them; infirmities follow; shames and humiliations bring down their prides and their vanities. Those they love are taken from them and the joy of life is turned to aching grief. The burden of pain, care, misery, grows heavier year by year. At length ambition is dead; pride is dead; vanity is dead; longing for release in their place. It comes at last – and they vanish from a world where they were of no consequence; where they achieved nothing; where they were a mistake and a failure and a foolishness; will lament them a day and forget them forever. Then another myriad takes their place and copies all they did and goes along the same profitless road and vanishes as they vanished – to make room for another and another and a million other myriads to follow the same arid path through the same desert and accomplish what the first myriad and all the myriads that came after it accomplished – nothing!

The second observation that caught my attention was his comments regarding success. In the book, he comments on the many bad business deals he had made in his lifetime which cost him dearly. He also missed an opportunity to invest in Alexander Graham Bell’s new invention, the telephone. However, an acquaintance of Twain’s invested $5,000 in the company and was paid back many times over thereby causing the writer to observe:

It is strange the way the ignorant and inexperienced so often and so undeservedly succeed when the informed and the experienced fail.

Our heroes are the men who do things which we recognize with regret and sometimes with secret shame that we cannot do. We find not much in ourselves to admire, we are always privately wanting to be someone else. If everybody was satisfied with himself there would be no heroes.

On writing, which I wholeheartedly agree:

…when the tank runs dry you’ve only to leave it alone and it will fill up again in time, while you are asleep – also while you are at work at other things and are quite unaware that this unconscious and profitable cerebration is going on.

Although Clemens was known to be a Mason (Polar Star Lodge No. 79, St. Louis, MO) there was no direct mention of his affiliation with the fraternity in the book. However, there were a couple of passages that suggested Masonic influence (I believe it was “wrong, cheat or defraud” and something else along those lines). The only other Masonic connection was Clemens’ meeting with Bro. Rudyard Kipling (Hope and Perseverance Lodge No. 782. E.C., Lahore, India, and one of the original forty Fellows of the Philalethes Society). Clemens spoke at length of his meeting with Bro. Kipling while the latter was but a young 24 year old visiting the United States for the first time. In his travels, he made it a point to look up Clemens where he was working in Elmira, New York.

Although they only met for a couple of hours, Kipling impressed Clemens by his breadth of knowledge, causing Twain to write:

He is a stranger to me but he is a most remarkable man – and I am the other one. Between us, we cover all knowledge; he knows all that can be known and I know the rest.

Samuel Clemens was a past master of the anecdote. His autobiography was assembled more as a collection of such stories as opposed to a flowing history. I appreciated his cogent comments regarding the world of the 1800’s. His ability to paint a picture with words and tell a story was like taking a ride on a time machine. I, for one, thoroughly enjoyed the trip, but I’m not sure today’s younger readers would feel likewise as his stories are less about the complexities of life and more about the simple truths of living it.

Most book reviews are printed either just prior to publication or shortly thereafter. I apologize for the slight delay.

END_OF_DOCUMENT_TOKEN_TO_BE_REPLACED

Raised to a Master Mason in 1908, at Harmony Lodge No. 17 in Washington, DC, Carl H. Claudy  served as the Master and eventually as Grand Master of Masons … END_OF_DOCUMENT_TOKEN_TO_BE_REPLACED

In this final installment of the Faith Hope and Charity series, we consider the symbolism of charity, or perhaps better called love. It is this attribute that … END_OF_DOCUMENT_TOKEN_TO_BE_REPLACED

In this installment of the Symbols and Symbolism of Freemasonry, we examine the text of Albert Mackey's Encyclopedia of Freemasonry on the symbolism of … END_OF_DOCUMENT_TOKEN_TO_BE_REPLACED

In this installment of the Symbols and Symbolism of Freemasonry, we consider a reading of Albert Mackey's text on the subject of Faith as it pertains to … END_OF_DOCUMENT_TOKEN_TO_BE_REPLACED