This short piece comes from Sanjay Mandaiker on the heels of recent editorials on the differences and disputes between Freemasonry and Catholicism.  From those differences, he suggests another path of discovery and consideration from a far off tradition for most in Freemasonry.

I have noticed that some of our Brethren are not at ease with religion and Freemasonry, in my opinion this arises when one confuses religion with the religious institution that represents it, for all religions in their basis are much like Freemasonry sowing the path of spiritual development in the minds of the masses. 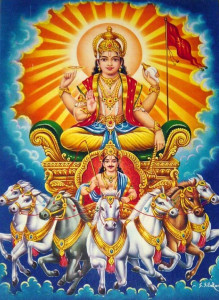 Suriya the Sun god of the Hindus (सूर्य Sūrya, the Supreme Light) is depicted on a chariot drawn by seven horses; these steeds are interpreted as the seven days of the week.

To me it goes far beyond this shallow meaning, in most religions and for that matter Freemasonry, the Superior Being or God, is represented by light, so let’s say Suria or the Sun is that light.

Another common aspect between religions is that man was made in the image of God so what’s the difference? Let us say there is a prism in between us so on one side is light, “God”, on the other the rainbow, “Man”, represented by the seven horses that draw the chariot, and the seven colors of the rainbow.

Based on this presumption let us assume the different colors are also different religions or paths that lead to the “Light” or “God”. Say your path is green (chosen simply because as it is in the center) and you are far away from the prism, the color you will notice is blurred, this signifies one does not understand one’s own path because of its width. Even while looking at it from the horizon we see only green because of this we assume it is the only path that exists and can become fanatical about following this path. As we start progressing on our journey towards the Light the color gets clearer (better understanding) but also narrower and we start to perceive a tinge of blue on one horizon and yellow on the other, continuing we find that to stay on our path one foot is in the blue the other in the yellow, yet the colors become more and more distinct, till finally we tread on all seven now narrow to a point and keeping their clarity merge back through the prism to become Light.

Is this not the reason we should not tolerate but respect our differences, is this not what all religion and Freemasonry are based on and therefore brethren let us individually merge our personal beliefs. Sharing ones thoughts via freemasonry could be a better use of this truth, compared to simply wondering how our religious intuition will judge us. If it works for you it’s good, it’s as simple as that to me. Maybe truth is a more appropriate word to describe this convergence of spiritual paths. 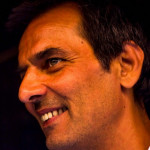