You are here: Home / Archives for 2b1ask1 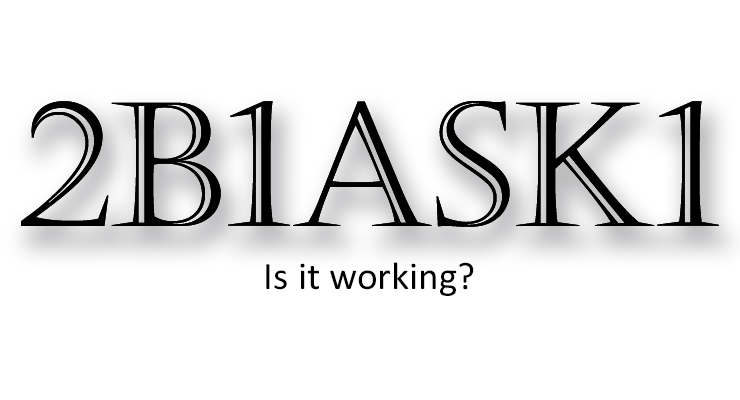 The mechanism behind the aphorism simply implying that if someone wants to be a mason, they need to ask one. Short, simple, and to the point.

The phrase encompasses the admonition that no Mason will (or can) ask someone to join or become one, because then the decision to join is solemn one—a turning point if you will. From existing in the profane world and a desire to enter into the company of like-minded individuals in pursuit of moral excellence, a theme I explore in the book The Apprentice.

2b1ask1 is a mantra familiar to every mason today. But does it work?

So, to join those in pursuit of that moral excellence, you have to ask for admission.

This process is as old as the fraternity itself and ensures that the individual seeking the degrees is doing so of his desire and will.

But is that the right interpretation of the 2 be one—ask one mantra? Should it be used in a way to necessitate those interested in the fraternity too, literally, have to ask to be one?

Or, should 2b1ask1 (alternatively written 2be1ask1 or tobeoneaskone) be interpreted as a slogan illuminating the process of how to become a mason, but NOT a barrier of admission necessitating the potential member to know beforehand.

In writing this, I went looking through a grand lodge constitution, but couldn’t find anything that implicitly said that the only way to become a member was to ask someone who already was one. In a more roundabout way, it implied the prospective member need fill out an application and then undergo the requisite investigation. It was in this process that it seemed to me that 2b1ask1 idea found resonance by ensuring the investigation went smoothly and avoided any hiccups causing the applicant apprentice from failing out of the process or receiving a cube in the vote.

So then, is the probation of having to ASK a Freemason to become a Freemason really a tradition from time immemorial?

Or is it a process to ensure the vetting process of admission be a near guarantee of entry—for a variety of reasons, all of which were mostly positive but to a degree (pardon the pun) the most beneficial to all involved on every level.

With that in mind, is the 2b1ask1 mantra working?

To assume someone would know to ask is a leap. The fact of necessitating it requires the asker knows in the first place their task. This would seem to be a barrier to entry without a large marketing campaign behind it telling prospective members “…Hey, you have to ask to join.” Maybe looked at in another way, it should be said: “Call us, we won’t call you.”

What would be the cumulative net value of flipping the script on this? Rather than necessitating a public who might not know anything about the fraternity to have to ask about it, approach it from the other way and work on a referral basis. Almost like an affiliate or feeder pipeline. You refer a friend, and they refer one, and so on… Yes, this would fly in the face of tradition to an extent, but wouldn’t solve the pipeline issue facing American Masonry today?

If people don’t know about something, they can’t join in. Think about this same concept in other terms.

Would you NOT invite people to come to your church? What about joining another social group you may belong to A club outing, a fantasy football league, a seminar on some social or political issue. Certainly, these are not necessarily on par with joining a Masonic lodge, but they still involve group participation with individuals you trust and hold in esteem.

What is it that Freemasonry demands to morally obligate people to have to ask to be part of?

Imagine how different things would be if the onus of asking was on the other foot.

Imagine how different things would be if instead of relying on others to ask to join, the fraternity instead turned outward and asked those it believed in amity with the ideals to join its ranks.

Maybe the idea of requiring outsides to ask has been the root cause all along for the decline in membership.

What do you think?

I had the pleasure to meet a elderly gentleman today who was a neighbor of a family member of mine. He was a very polite fellow, with a good measure of mirth and authority, tempered only by a touch difficulty to hear. In the conversation he dropped that he was 78, but you’d never guess it with the way he handled himself in his yard work.

The conversation started, after a quick exchange of pleasantries, with the innocent question to me of “Who was the Mason?” He had obviously noticed the bold square and compass on the back of my car, and it had intrigued him enough to ask about it.

I replied to him with the short reply that “I was so taken”, something any in the know brother should key in to, but I realized in just a few seconds that he wasn’t so taken, and I replied the it was me, with the elevator speech prepping to roll off my tongue, only to have him interrupt me.

“My dad was a Mason” he said with a fond gleam in his eye. “Yeah, he was a 22nd, or 32nd or something…” “I used to know the handshakes, something he told me never to throw out there, or someone would really lay into me”. I smiled to myself as he said it.

“Yeah, I have his Bible inside”.

“A Blue Masonic Bible?” I asked.

“Yeah, a big one, it was his grand-dads before him, and so on…” he trailed off, wistful again.

“I have all his things from the Masons, I’ve wanted to put into a shadow box for years” he said with a near tone of excitement. “His rings, pins, books, and lots of papers” again with a fond look in his eye.

“He had showed me all of it when I was 5, and he treated it with such reverence.” I could tell he was looking back in time. “I remember it like it was yesterday….” His yesterday trailed off for a few seconds, which I jumped on the memory to ask the question looming over us like a tree.

“So how come you never joined?” It felt like a lead weight on a line being thrown at his feet, but I had to ask.

“Oh, he dropped hints several times over the years, even inviting me to join, but I never took him up on it.” He said sounding almost regretful of the missed opportunities of the path that could of been. “I liked to ride motorcycles and hung with a rough crowd, not the kinds that were the Masons I knew. The Masons were all really good guys, and I didn’t think they would like me hanging with the crowds I ran with.”

“Its funny you should say that,” I said, “there are a lot of guys in the fraternity, including those that have bike clubs.”

“Oh I know, it just wasn’t in my cards to do it I suppose, but I have the fondest memories of my dad being in it.” he trailed off, and turned the conversation to the yard work and other mundane aspects of life.

Besides the obvious pleasure at the conversation, the exchange came to me at a time when I was asking the Great Architect some challenging questions: about life, about the fraternity, and my place in it, and its future. I know the last thing on the list is something bigger than any one person can answer, but its always been a burning question for me as I consider it in the face of my sons who I hope to one day join its ranks.

But what the conversation left me to think about, as I resumed the path of the rest of my day, was rather than simply consider why others would want to join, to take a few minutes and ask myself why did I join? Why did I become a Freemason and did it live up to those expectations? What could I do to make it that way?  I’ve personalized it of course, but its a question we can all ask of ourselves.  Why did I join Freemasonry?

The man who I had the conversation with didn’t join for what ever reasons, but his father did, and his father’s father did, and they probably had a hope that this, now elderly, gentleman would too.  But, he didn’t for what ever reasons he had at the time.  His progenitors are not here to ask why they joined, but we can ask ourselves that question.

So why did you decide to join?

END_OF_DOCUMENT_TOKEN_TO_BE_REPLACED

Raised to a Master Mason in 1908, at Harmony Lodge No. 17 in Washington, DC, Carl H. Claudy  served as the Master and eventually as Grand Master of Masons … END_OF_DOCUMENT_TOKEN_TO_BE_REPLACED

In this final installment of the Faith Hope and Charity series, we consider the symbolism of charity, or perhaps better called love. It is this attribute that … END_OF_DOCUMENT_TOKEN_TO_BE_REPLACED

In this installment of the Symbols and Symbolism of Freemasonry, we examine the text of Albert Mackey's Encyclopedia of Freemasonry on the symbolism of … END_OF_DOCUMENT_TOKEN_TO_BE_REPLACED

In this installment of the Symbols and Symbolism of Freemasonry, we consider a reading of Albert Mackey's text on the subject of Faith as it pertains to … END_OF_DOCUMENT_TOKEN_TO_BE_REPLACED