You are here: Home / Archives for action

– Why it is easier to be more reactive than proactive. 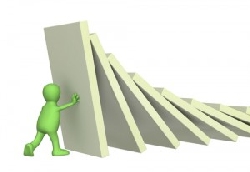 Americans tend to be more reactive as opposed to proactive in their approach to life. I suspect the reason can be traced back to our Anglo heritage which historically has been hesitant to take decisive action. Consider how slow the British were to suppress the uprisings of its colonies, usually making the wrong decisions in the end. Our history is littered with instances affirming our reactive behavior; e.g., Pearl Harbor, the Battle of the Bulge, the Stock Market crash of 1929, 9/11, Hurricane Katrina, and the Crash of 2008. These disasters could have been avoided if we had heeded warnings and planned accordingly. For example, the destruction of Katrina could have been averted had local politicians heeded the advice of the Corps of Engineers. Pearl Harbor could have been avoided if the military had listened to General Billy Mitchell a whopping 17 years earlier.

There are many reasons for reactive management: laziness, arrogance, apathy, timidity, unwillingness to offend anyone, or plain and simply, it is easier than being proactive. Making difficult decisions is hard work which is why most people procrastinate. Like it or not though, “Not to decide is to decide.” If we do not make the decision ourselves, a decision will be made for us, and probably not to our liking. We see this in such things as making funeral arrangements, divorce, handling troubled children, putting parents in an assisted living facility, making a major financial transaction, evaluating employees, career changes, and terminating employees. People can be slow to react in making such decisions and, by doing so, they inevitably fester and get worse.

I have a friend who has some aging parents entering the twilight of their years. The husband has developed some physical problems restricting his mobility. The wife is in the early stages of Alzheimer’s and is forgetful. They have been married for 60 years but are now finding it difficult to care for each other. Their siblings have encouraged them to sell their house and move into an assisted living facility near one of the children. At first they reluctantly agreed and signed a contract with a realtor, but after reflecting on it, the mother put a halt to it by steadfastly refusing to move. Although the husband’s driving days are coming to an end, the wife believes she can still drive which scares the family as she might take the car for a spin and either get lost or hit someone. As a precaution, the family keeps the car keys hidden.

My friend has tried to reason with them that now is the time to sell the house before one of them suffers a fall, is hospitalized, thereby leaving the other alone. Regardless of his arguments, they refuse to budge. Again, here we see a prime example of reactive management at work. The mother feels particularly comfortable in her home and does not want to leave it. She knows her kitchen, her neighborhood, and her church. However, she is not truly aware of her mental condition and how isolated she really is. Should something happen to the father, which is likely, she would be trapped in the house. In her case, she does not want to deal with reality and accept the fact there is a problem. The father does not want to fight his wife.

We do not like to make a difficult decision. Some managers balk at performing an employee evaluation or terminating employment as they do not want to hurt another person’s feelings. By not addressing such actions, the manager is doing a disservice to both his company and the employee who may very well be unaware a problem exists and, as such, does not take corrective action to improve himself.

Back in Chicago, my father had to terminate an employee. Prior to this, he gave the employee every opportunity to make adjustments and improve himself. He even went so far as to reassign him to other jobs within the company, hoping he would excel in another position. Unfortunately, nothing worked. Finally, he had to let him go. About a year later, my father happened to meet the man downtown. My father was understandably concerned his former employee held a grudge. Remarkably, he didn’t. Instead, he thanked my father for terminating him which forced him to find the correct career path. By taking a proactive approach, my father did what was best for the company and, ultimately, the employee.

Being proactive is much more difficult than being reactive. It requires planning, a conviction of beliefs, and the ability to sell the course of action appropriately. In other words, it requires a mastery of interpersonal relations/communications. These are much needed skills which are typically learned through life experiences. Unfortunately, this is something we cannot teach in business schools.

For my earlier paper, see “Proactive versus Reactive Management.”

END_OF_DOCUMENT_TOKEN_TO_BE_REPLACED

Raised to a Master Mason in 1908, at Harmony Lodge No. 17 in Washington, DC, Carl H. Claudy  served as the Master and eventually as Grand Master of Masons … END_OF_DOCUMENT_TOKEN_TO_BE_REPLACED

In this final installment of the Faith Hope and Charity series, we consider the symbolism of charity, or perhaps better called love. It is this attribute that … END_OF_DOCUMENT_TOKEN_TO_BE_REPLACED

In this installment of the Symbols and Symbolism of Freemasonry, we examine the text of Albert Mackey's Encyclopedia of Freemasonry on the symbolism of … END_OF_DOCUMENT_TOKEN_TO_BE_REPLACED

In this installment of the Symbols and Symbolism of Freemasonry, we consider a reading of Albert Mackey's text on the subject of Faith as it pertains to … END_OF_DOCUMENT_TOKEN_TO_BE_REPLACED