You are here: Home / Archives for afterlife 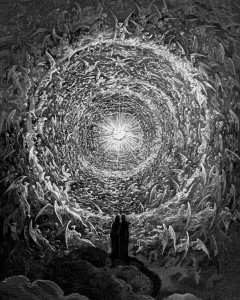 As I entered the Lodge room sightless I heard the most beautiful music I had ever heard.  It was not a music I was familiar with nor was whatever produced the music, instruments that I could identify. But it was oh so peaceful, piercing my soul and creating a sense of harmony and accord throughout. I was energy dragged or conducted in thought around the Lodge to this music in what seemed like a haphazard pattern but after eight repetitions I was able to discern that there were four repeats of two separate maneuvers, one being a circle and the other being a triangle.  The repetition of maneuvers was necessary, as it was later explained to me, to create the image of a three dimensional symbol for this degree. And this symbol was one of the Innermost Chamber where I received this degree.  The Square and Compasses still adorned the outside building of the Lodge but within this building was an inner building where the Pyramid and Globes were the symbols used.

I was later to see what this symbol looked like.  It was a Pyramid within which were three Globes aligned vertically from the peak to the base.  Within the top Globe was a small Pyramid pointing down.  The bottom Globe had a Pyramid pointing up and the middle Globe had a three dimensional six pointed star. The meaning of this symbol was that the spirit of the Creator, Redeemer and Sustainer was infused into the circle of life, that never ending cycle of birth, death, rebirth, death again, rebirth again and on and on into affinity. It also carried the meaning of unity as we are all together as one, united as beings who all possessed a piece of the Creator. The symbol was not attached anywhere but would always appear before your discernment wherever you were in the Innermost Chamber in the form of a hologram

There was neither reception on any points of an instrument nor an obligation to this degree.  It was explained to me that in my present state of neither time nor place but just all, that penalties, oaths and promises were superfluous.

I was conducted to the South, West and then the North of the Lodge where still powered down and only able to hear I would have, however, the insight to view a totally private movie hologram only visible to me.  In the South I received a review of my entire life.  This was shown to me in a hologram depicting people, places, events, happenings and occurrences in a fast moving continuous movie at last stopping at the moment of my passing over. It seemed as if it was over before I had begun but those who surrounded me assured me later that it took quite awhile.

In the West I viewed as before in a continuous moving hologram all the times I had inspired others and when I was kind, compassionate, loving and humble. Many times I was overcome with emotion as what was presented to me was so life like that I felt that what had occurred in the past was happening again right before me.  There is real meaning to the word reliving.

And then in the North I relived the dark side of myself,  all the times I had acted with an overbearing bloated ego to lash out and hurt others, all my failings, my sins and the times I had let others down. Again I was moved to tears to think that I had acted in such a manner. And that is why these holograms were totally private to me as those assembled around me were not there to judge but to support.  And I felt the warmth of their brotherly love and affection.

Like my earthly degrees I was conducted, but by mind, out of the Innermost Chamber to the Ante Room to be prepared to re-enter for the second section of the degree, the lecture.

My conductor, Hiram Abiff, powered me back up to full energy and then spoke to me.  “Your earthly degrees have taught you the merits of the application of toleration and non judgmentalism,” he said. “They have shown you how to enjoy peace, harmony & accord among people of different races, religions, cultures, political persuasions, and economic circumstances.  Now we will take you even further into that concept in the lecture of the Last Degree.”

I was readmitted into the Innermost Chamber and brought to the East.  The image of the Pyramid and Globes were ever present before me in a hologram.  Welcoming me into the East was a black woman of perhaps middle age.  Her feeling of brotherly love and affection was glowing warmth that infused my spirit.  She commenced the lecture slowly and deliberately.

“The lesson of the Last Degree is that the separation that plagues many in their earthly pilgrimage, that division where you see others as different, less worthy or unentitled and which sets you apart from them, is really a separation from God. Yes, in reality there are real differences on Earth.  A man and a woman on Earth are actually made slightly differently and respond in different ways.  There are different races, cultures, creeds and concepts of the Creator.  But to attribute something sinister to those differences is to use then to divide rather than bring together and then to ostracize thus making a separation. Carried to extreme, this separation progresses  from distrust to suspicion leading to contempt to hate and ultimately to extermination or ethnic cleansing. This disunity is a construction of humankind possessing free will and does not reflect the intentions that your Creator has for you. This division, disunity and separation are what really the Adam & Eve story and the fall of man are all about. For in human disunity and separation exists the separation from the Almighty.”

“It has been said that humankind was created in the image of God.  But I say to you that each human is a piece of God and possess a small portion of the Almighty within them.  Whether that piece grows and becomes a bigger and bigger part of a human being depends on the choices each human has made in their life journey.  The purpose of your journey is to feed and nurture your soul in an Earthly mission that God has given you the tools to accomplish.  In so doing you enable the Almighty Creator, the Master of Heaven and Earth to experience itself. Living ‘the Godly life’ is the ability to rise above that which seeks to divide and create chaos.”

“It is now time, my Brother, for you to commit yourself to the belief that WE ARE ALL ONE.  There are no OTHERS. When you pull away or disassociate from what you perceive to be another, you are only separating yourself from yourself and from whence you came and to whom someday you will return. When you harm or hurt what you perceive to be another you only harm or hurt yourself.”

“The Pyramid and Globes are the symbol of this degree, my Brother. It teaches that all of life, its peaks and valleys, its joys and sorrows, its loves and fears, is a holy and sacred experience. It visualizes for you the concept that life is never ending but continues to move, starting where it finished and finishing where it started.  It goes around and around and on and on forever in “the unity of the Holy Spirit.”  WE ARE ALL ONE. There is no part of us that is separate or outside the Pyramid and Globes.  We are all pieces of the same pie.  God is in us and we are in God. WE ARE ALL ONE!  Now go in peace and harmony and accord and rejoice in that knowledge.”

This is KROC your classic rock station for Dallas on this Monday morning.  The time is 5:30 AM and the big yellow ball is rising over the Metroplex on what is going to be a beautiful day. How about a little Pink Floyd – “Dark Side of the Moon” for all you classic rockers who don’t want to get up this morning!

Read from the beginning – I Had a Dream.

END_OF_DOCUMENT_TOKEN_TO_BE_REPLACED

Raised to a Master Mason in 1908, at Harmony Lodge No. 17 in Washington, DC, Carl H. Claudy  served as the Master and eventually as Grand Master of Masons … END_OF_DOCUMENT_TOKEN_TO_BE_REPLACED

In this final installment of the Faith Hope and Charity series, we consider the symbolism of charity, or perhaps better called love. It is this attribute that … END_OF_DOCUMENT_TOKEN_TO_BE_REPLACED

In this installment of the Symbols and Symbolism of Freemasonry, we examine the text of Albert Mackey's Encyclopedia of Freemasonry on the symbolism of … END_OF_DOCUMENT_TOKEN_TO_BE_REPLACED

In this installment of the Symbols and Symbolism of Freemasonry, we consider a reading of Albert Mackey's text on the subject of Faith as it pertains to … END_OF_DOCUMENT_TOKEN_TO_BE_REPLACED