You are here: Home / Archives for ancient history 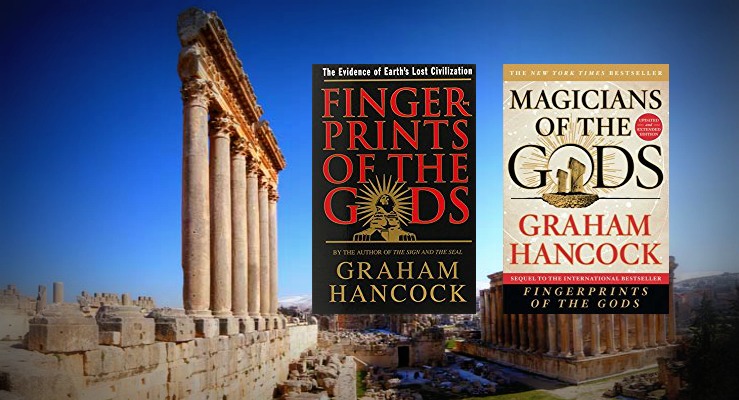 Having just finished Graham Hancock’s Fingerprints of the Gods and Magicians of the Gods, I feel as though I’ve been walking in the footsteps of the gods, and it’s made me a believer.

Seldom do I binge watch more than a few TV episodes at a time. When I do, it feels like an information overload that makes the whole thing hard to process and nearly impossible to enjoy. The same could be said for books and reading. When I finish one book on a particular subject I like to move on to another, to cleanse the mental palate and process what I just read.

I thought about this when I picked up Graham Hancock’s Fingerprints of the Gods. Fingerprints was one of those books I’d spent the better part of 30 years avoiding just out of sheer will because, I had thought, it was an alt-history cavalcade and the well-spring of countless conspiracy, cryptozoology and pre-history anecdotes. This hesitancy in picking up Fingerprints was on the heels of an Art Bell fascination and right around the time I became a Freemason.

Still, like the mantra emblazoned on Fox Mulder’s poster — I wanted to believe.

The idea of a pre-history has always fascinated me. I had my own theories from history courses in college. Early on, I considered a minor in Greek and Roman art history, but sufficed myself on being an armchair historian consuming academic and literary explorations of ancient history. Field work on the subject, however, wasn’t in the cards.

But all the while, nagging at the back of my brain (along with Fingerprints maybe) was the notion that the timeline of history couldn’t possibly be sufficient to achieve some of the marvels that spawned out of a few short centuries only to go so silently quiet.

So, I’d passed on Fingerprints… and waited. I waited so long I had, for the most part, forgotten about it and lost myself in studying Freemasonry. Fingerprints of the Gods had receded so far in my head that when I caught a YouTube video with Graham Hancock presenting his ideas and theories, it all came back to me such that, within a week I was out at my local book seller buying a new copy to start reading on the spot.

So, in the span of a few weeks, I consumed Fingerprints of the Gods

, feeling as though I was right there with Graham climbing the steps of the Giza pyramid and digging around in the water worn stone of the Sphinx. Reading it slowly, I measured every word of every chapter and gave considerable thought to the ideas he put forth — ideas, I’ll add, that while on the fringe of academic study, are not outside the philosophical reality as they intersect the realms of the history before history. Isn’t that part of the great mysteries of the human species? How did we build the pyramids? Why did we build them?

In Fingerprints of the Gods, Hancock sets the theoretical stage for a cataclysmic event at about the period of Younger Dryas (about 14,500 years ago) that wiped out a civilization more advanced than its contemporary hunter-gatherer counterparts. His theory is that this civilization, in collapse, struck out across the globe establishing megalithic monuments and reorganizing the hunter-gathers enclaves they encountered into porto-civilizations turning them into agricultural-socities. Hancock’s theory in Fingerprints was an earth crust displacement that moved and sizable landmass from a habitable zone into an inhospitable one — destroying in an instant an ancient advanced civilization. Upon its demise, this great civilization fled the disaster zone and seeded themselves around the globe erecting megalithic monuments to memorialize the event and warn subsequent generations of the cataclysm that happened to them and it’s recurrence in the future.

Immediately I was sucked into the text with the mention of an ancient map accurately depicting the coastline of Antarctica. It was compelling, and took me down the rabbit hole I’d so long resisted — loving every word of it. While some of the conclusions were broad in their scope, I had to admit that the conclusions were plausible and worth greater consideration. Why couldn’t a species that’s been on the planet only have created a “modern” society in barely the last 7,000 years. Personally, I don’t take this to mean there were flying machines in antiquity or weapons of mass destruction that wiped out society. But, notion of history before history was just as intoxicating to think about in consideration of the imaginings from the sundry religious texts Hancock sites as parallels to his theories.

Finishing Fingerprints, I was compelled to immediately start reading his follow up book Magicians of the Gods.

Written in the same mesmerizing fashion as his earlier work, Magicians was different. Published 22 years after Fingerprints, Magicians of the Gods

felt in one hand a mia culpa (on the earth crust displacement and link to the Mayan calendar 2012 debacle) and a in the other a substantiation on the cataclysm of the Younger Dryas period, illiterated across the globe in the surviving (and reachable) megalithic structures, in particular the nascent discovery of Gobekli Tepe in the Anatolia region of Turkey. As in his earlier work, Hancock paints an even greater detailed picture of the province of ancient antediluvian culture. In Magicians of the Gods, with the aid of science and observational inputs, Hancock adds further mass to his scaffold of an ancient civilization being wiped from the memory of time. I don’t want to give too much away but Hancock’s arguments are compelling and worthy of deep consideration and, dare I say, exploration further.

A point in the work I did find of great interest was a reference in the text to the esteemed Masonic author Timothy Hogan and his observational analysis of marks in Temple of Bacchus in Lebanese megalithic structure at Baalbeck. Another was, much to my surprise, was a broad weaving in of the Hermetic texts, expounding the very oft mentioned “as above, so below” but with great consequence in his meaning. In a very brief encapsulation, resting on Hermetica, the thrust of his hermetic connection is that the universe affects life on Earth, and the Earth reflects the effect of the universe upon it. This reflection is encoded in the megalithic monuments of that share uncanny similarities in their construction and in the sheer mass of their existence from a time before recorded history.

In a general reference, Hancock writes of the cataclysmic events that they were,

…embedded in myths and legends and in mathematical and architectural precepts that would be passed on and renewed again and again by the different cultures that received them, thus boosting the signal and allowing it to remain intact for thousands of years. Even if those through whose hands and minds the signal passed no longer understood its meaning, the weight of sacred tradition, hoary with age would ensure that they were continued to transmit it and would do their utmost to keep it free from interference.

Throughout Magicians, Hancock seems reflective of what on what he’s discovered — different than the tone of the Fingerprints when the reporter turned author was carving out a Hyperborean like view of humankind emerging out of the era of hunter-gathers in the prehistoric Clovis period. Maybe the reflectiveness comes at the realization of what he’s proposing is very real and, again, set in a framework of a very clear and present danger in the annual annual passing through the Taurid meteor showers.

Yet, the cycle of the universe moves slowly, and the mysteries of processional time and the rise and fall of the human species is forgetful — it’s an informational overload at a glacial pace. Hancock’s declaration may be a solitary voice in the wilderness with the message of Fingerprints of the Gods and Magicians of the Gods. But science, it seems, is teasing points of validation to both works, if even in validating ancient comet strikes or finding ancient megalithic sites bedecked in astronomical corollaries dating to near the period of the Younger Dryas event. Hancock made me a believer, or at least validates my suspicions of ancient history and the history before history, whether upon the shores of Antarctica or the now underwater regions submerged in the great flood, a point Hancock brings into full focus with the mystery of Atlantis.

Yes, it’s extraordinary. Yes, it’s a lot to take in. And, no, it isn’t a scientific treatise. Fingerprints of the Gods, and it’s follow up Magicians of the Gods, are fantastical works about the fluid history past, present and future of humankind. And, just as Hermetica (and Hancock in the conclusion) reminds us,

The forces do not work upward from below, but downward from above…All the world which lies below has been set in order and filled with contents by the things which are placed above… The source of all earthly things are on high: those sources pour forth upon us by fixed measure and weight; and their is nothing that that has not come down from above.

Graham Hancock knows it, his Fingerprints of the Gods and Magicians of the Gods illustrates the points. You should probably know it, too. Even if you have to binge read it like I did.

END_OF_DOCUMENT_TOKEN_TO_BE_REPLACED

Raised to a Master Mason in 1908, at Harmony Lodge No. 17 in Washington, DC, Carl H. Claudy  served as the Master and eventually as Grand Master of Masons … END_OF_DOCUMENT_TOKEN_TO_BE_REPLACED

In this final installment of the Faith Hope and Charity series, we consider the symbolism of charity, or perhaps better called love. It is this attribute that … END_OF_DOCUMENT_TOKEN_TO_BE_REPLACED

In this installment of the Symbols and Symbolism of Freemasonry, we examine the text of Albert Mackey's Encyclopedia of Freemasonry on the symbolism of … END_OF_DOCUMENT_TOKEN_TO_BE_REPLACED

In this installment of the Symbols and Symbolism of Freemasonry, we consider a reading of Albert Mackey's text on the subject of Faith as it pertains to … END_OF_DOCUMENT_TOKEN_TO_BE_REPLACED