You are here: Home / Archives for apprentice

In this installment of the Symbols and Symbolism of Freemasonry, we consider a reading of Albert Mackey’s text on the subject of Faith as it pertains to Freemasonry. Distilled to a single word, Mackey gets to the essence of what that faith means in the fraternity and why it is so critical to the becoming of an Apprentice mason. Rather than give away Mackey’s conclusion, I’ll let his words speak for themselves as we explore them.

In the theological ladder, the explanation of which forms a part of the instruction of the First Degree of Masonry, faith is said to typify the lowest round. Faith, here, is synonymous with confidence or trust, and hence we find merely a repetition of the lesson which had been previously taught that the first, the essential qualification of a candidate for initiation, is that he should trust in God.

In the lecture of the same Degree, it is said that “Faith may be lost in sight; Hope ends in fruition; but Charity extends beyond the grave, through the boundless realms of eternity And this is said, because as faith is “the evidence of things not seen,” when we see we no longer believe by faith but through demonstration; and as hope lives only in the expectation of possession, it ceases to exist when the object once hoped for is at length enjoyed, but charity, exercised on earth in acts of mutual kindness and forbearance, is still found in the world to come, in the sublime form of mercy from God to his erring creatures.

Masonic tradition informs us that the lamb skin apron is more ancient than the Golden Fleece. Ancient being the operative word, just what exactly does that implication imply and how is the Golden Fleece remembered in more contemporary times as it may relate to the apron given to the newly raised entered apprentice?

In Greek tradition, the fleece of the Ram Chrysomallus, was the object of Jason and the Argonauts expedition.

The mythological story of the Golden Fleece begins in the telling of the story about Phrixus and Helle who were the children of the goddess Nephele (a cloud nymph) and Athamus. The two part ways allowing Athamas to remarry Ino, who, in turn, becomes jealous of her step children, Phrixus and Helle, hatching a plot to do them in. Ino destroys a seed crop and then sends messengers to consult with the oracle at Delphi on what to do. To put her plan into motion, Ino persuading the messengers to return from the Oracles with prophecy that to restore the fertility of the fields Phrixus would need to be sacrificed.

Nephele, seeing the ruse, sends a golden ram to rescue her children, losing daughter Helle in the process as she falls into the Hellespont (known today as Dardanelles, which is a narrow strait in northwestern Turkey connecting the Aegean Sea to the Sea of Marmara). Phrixus, makes the trip safely arriving at Colchis where he marries the daughter of King Aeetes. In celebration of the rescue and the marriage, Phrixus sacrificed the winged golden fleeced ram to Poseidon returning its soul to the deity in turn creating the constellation Aries.

In his appreciation, Phricus gives the pelt (the Golden Fleece) to Aeetes, the king of Colchis, who placed the in an oak tree defended by bulls with hoofs of brass and breath of fire. It was also guarded by a dragon with teeth which could become warriors when planted in the ground. Here it remained until Jason and his band of Argonauts arrived to claim it.[1]

So goes the story of the Ancient Golden Fleece. Thought to be the oldest of Greek poems, Argonautica Orphica, and the telling of Jason’s quest to capture the Fleece appears to originate somewhere in the 5th or 6th century CE.[2] The Hellenistic epic Argonautica dates to a period of the 3rd century BCE.[3]

Wells, in his Builder article on the subject, mentions a knightly order called the Order of the Golden Fleece which was a celebrated Order of Knighthood in Austria and Spain, founded by Philip III, Duke of Burgundy and the Netherlands, at Bruges, on the tenth of January, 1429, on the occasion of his marriage with Isabella, daughter of King John I. of Portugal.[4]

This Order was instituted for the protection of the Roman Catholic Church, and the fleece was assumed for its emblem, from being a staple commodity of the Low Countries. The founder made himself Grand Master of the Order, a dignity appointed to descend to his successors; and the number of knights, at first limited to twenty-four, was subsequently increased.

Contests arose between Spain and Austria as to the possession of this Order of Knighthood, which were finally adjusted by introducing the Order into both countries. In Austria the Emperor may now create any number of Knights of the Golden Fleece from the nobility. If Protestants, the consent of the Pope is required. In Spain, Princes, Grandees, and personages of peculiar merit are alone eligible to membership in this Order.

It’s said that the Duke’s stated reason for founding the Order was:

for the reverence of God and the maintenance of our Christian Faith, and to honor and exalt the noble order of knighthood, and also …to do honor to old knights; …so that those who are at present still capable and strong of body and do each day the deeds pertaining to chivalry shall have cause to continue from good to better; and .. so that those knights and gentlemen who shall see worn the order … should honor those who wear it, and be encouraged to employ themselves in noble deeds…

An interesting biography exists on the Order through an association, La Confrérie Amicale de la Toison d’Or, dedicated to preserve its history. It says of the Order that the the meaning behind the use of the Fleece goes deeper than merely being a Hero’s Quest, saying,

It is clear from the icon of Jason on the early Golden Fleece insignia that the daring voyage of the Argo to bring back the sacred Golden Fleece from the edge of man’s known world touched Philipp deeply and helped inspire his dreams. The Argonauts were few in number, carefully selected for their nobility and talents and dedicated to the most noble of causes that also held religious and humanitarian importance. It is these values that we see in the statutes of the Order of the Golden Fleece.

Given the use in the degree as an ancient symbol, it seems unlikely that the knightly order is the point of reference within the Masonic degree. More likely is the mention of the fleece in the aspect of the Hero’s Quest, including allegories to jealousy, selfishness and sacrifice.

The legend of the Golden Fleece, for which the Argonauts searched, is like the story of Masonry, a search for that which was lost. It is familiar to most readers of poetry and myths, and is interesting as being among the first known voyages of discovery. 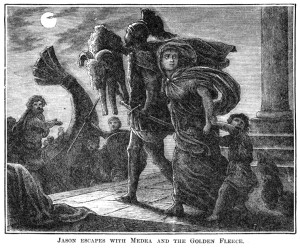 Interestingly, Jason went on the quest for the Fleece in order to reclaim his kingdom from Pelias, an almost Biblical parallel to the story of Moses suggesting a deeper borrowing of Greek tradition in the writing of the Old Testament narrative.

Albert Mackey, in his Encyclopedia of Freemasonry and its Kindred Sciences (1914), says of the Fleece that it is “…evidently not to the Argonautic expedition in search of the golden fleece, nor to the deluge…but to certain decorations of honor with which the apron is compared” suggesting instead that the “…Order of the Golden Fleece was of high repute as an Order of Knighthood. It was established in Flanders, in 1429, by the Duke of Burgundy, who selected the fleece for its badge because wool was the staple production of the country. It has ever been considered…one of the most illustrious Orders in Europe” making it the “the highest decoration that can be bestowed upon a subject by a sovereign of Great Britain. But the Masons may have been also influenced in their selection of a reference to the Golden Fleece, by the fact that in the Middle Ages it was one of the most important symbols of the Hermetic philosophers.”

Interesting here that Mackey traces the distinction of the Fleece to the chivalric order and not the more widespread mythology of the ancient world. One line of thought that deserves greater exploration is the importance of the Golden Fleece to the Hermetic philosophers and what, if any connections that bears to Freemasonry.

As an aside, there is some (Masonic) suggestion that the Golden Fleece story suggests the bringing of sheep husbandry, grain, or wisdom to Greece from the east or the panning for gold with sheep’s wool in the ancient world.

The Golden Fleece has made its way into the material culture such that it exists in several iterations in film and in video games. In the World of Warcraft MMORPG universe as a unique drop trinket that “May cause extra gold to drop whenever you kill a target that yields experience or honor and is a sign of wealth and status amongst the Saurok.” which perhaps supports the notion of it being a symbol of authority and kingship. It also made an appearance in the game God of War II where it can be seen hanging from the mouth of a cursed Cerberus that had devoured Jason.

The quest for the fleece was also the subject in the 2013 film Percy Jackson: Sea of Monsters. In the film, the teen Argonauts quest to find the Golden Fleece (with the power to heal anything) to rescue their diefic haven from oblivion. 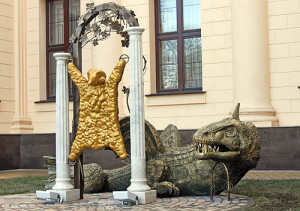 In a more modern parlance for those wanting to undertake the quest for the ancient wool, artists Piotr Khrisanov and Jakov Matusovski have recreated the mythical Golden Fleece in Sochi, Russia.  The monument aims to bring back the symbol of prosperity to the Black Sea town near where Jason and his crew went searching for the fleece in Caucasus. Made of bronze and covered in a layer of gold, it’s suggested that it weighs roughly 5 tons.  A sister monument will be erected in the Greek city of Volos, which is believed to be where the Argonauts had set out for their campaign.

However you look at the Golden Fleece, in past or present telling, it still remains an emblem younger than the apron of a Mason.

[1] THE ORPHIC ARGONAUTICA – Pseudo-Orpheus 4th c. CE or laterm translated by Jason Colavito (2011)
[2] Argonautica Orphica – http://en.wikipedia.org/wiki/Argonautica_Orphica
[3] The Project Gutenberg EBook of The Argonautica, by Apollonius Rhodius
[4] Excerpts of The Presentation of the Apron by Br. John W. Wells, from the Builder Magazine October, 1915