You are here: Home / Archives for awards

we saw how Craft Lodge performance and membership deteriorated after 1960. We also took a brief look at the Grand Lodge response (when they woke up) of increased mandates, centralized control, relaxed standards, Institutional charity and One Day Classes which differed drastically from the response of individual Masons, that being the formation of TO Lodges.

One of the reasons that Masons themselves resorted to starting new TO Lodges is that they could get none of their reforms approved by a majority vote of the Lodges they belonged to. Senior citizens on fixed incomes comprised the bulk of Lodge membership and they refused to vote for anything that cost money or change anything from the way it was always done. They possessed this power as we have seen because Mainstream Masonry skipped a generation resulting in a disproportionate number of elderly Masons.

Starting a new TO Lodge is not as easy as it sounds. First of all many jurisdictions prohibit them as being an illegal altering of Freemasonry – “You agree to make no changes in the body of Freemasonry.” Even when approved some provisions a TO Lodge might want to adopt would violate Grand Lodge By-Laws, such as meeting less than once per month. Then there is the sheer volume of work involved, petitioning Grand Lodge, drawing up By-Laws, finding a place to meet etc.

So if much of what the reformers and the young enthusiasts hope to accomplish could be implemented within current Lodge structure and if it was not only sanctioned by the Grand Lodge but was enthusiastically encouraged by the Grand Master, would that not be a viable alternative? Such a program exists now. It is called the Lodge of the Year program and exists in many jurisdictions under many different names. Let’s take a look at the Grand Lodge of Iowa’s program.

Brother Gerald Edgar of Mosaic #125 AF&AM @ Dubuque, IA, Grand Lodge of Iowa has supplied The Beehive with the following information.

The Iowa Grand Lodge “Lodge of the Year” program can be a truly rewarding program for those Lodges that compete.  As one can see from the application form, a successful lodge must not only engage its Master & Wardens but many other members as well if it hopes to achieve the variety of goals set out.  Not only do the Officers need to fulfill their duties, but they truly must put the Craft to work, engage the public, be charitable and in general use as many “tools” as possible to be a successful lodge.  A hallmark of the competition is the planning beginning with the WM’s vision for his term followed by the planning of individuals and committees to identify goals, the means to achieve them and implementation.

One measure of the success of the competition is that those Lodges that compete have fewer SNPD’s & demits and more Raisings.  One might conjecture that ‘good’ lodges would be successful regardless but the competition provides a measuring tool and a roadmap.  Ideally as soon as a Brother is elected to his lodge’s ‘line’ he can begin planning what events he will promote, what he needs to prioritize, whom he can influence to chair an event, etc.

We are all competitive to some degree – such lodge competitions, if done fairly, can satisfy our competitive nature while making our lodges true “working” lodges.  Members enjoy being part of a vital, lively organization and the lodge prospers.   Creativity results as well.  One competition requirement is holding a recognition of some persons or groups within the community apart from Masonry.  At Bethel Lodge a PM came up with the idea of recognizing community volunteers such as Scout & 4H leaders with a dinner.  Yes, these folks may be recognized within their own group but to be applauded in public makes them especially proud.  (and the Lodge got nice coverage in the local newspaper – just remember to prepare press releases and always have a camera ready!)

Even if your Grand Lodge does not have such competition, the checklist will prove to a valuable tool in revitalizing your Lodge both within the Lodge Room as well as within your community. 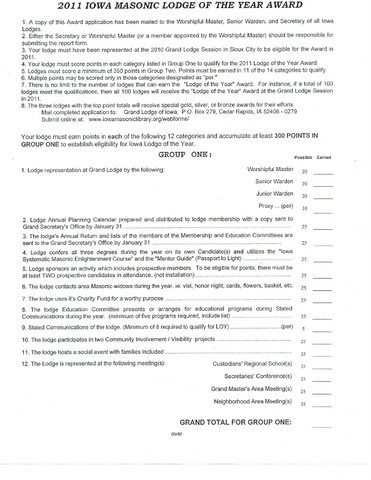 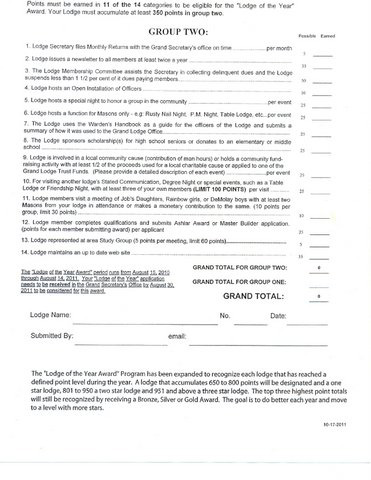 I would tweak the Iowa Program with these additions.

The Bee Hive is  indebted to Brother Gerald Edgar of Iowa for supplying the information that made this article possible.  The Lodge pictures included here are explained by Edgar.

The big temple is the Dubuque Masonic Temple, built in the 1930’s in the style of an English Manor House – it is as magnificent inside as it is outside.  Four Lodges, YorkRitBodies, OES, White Shrine, DeMolay, High-12, etc are among the Masonic bodies therein.  The storefront Lodge Hall was built in 1916 as the third home of Bethel Lodge #319 which owns the building with 3 tenants providing income.  The unusual feature is the large cast concrete square & compass at the roof line, with a York Rite keystone below.