You are here: Home / Archives for Boomer

– The Baby Boomers versus the Millennials, and beyond. 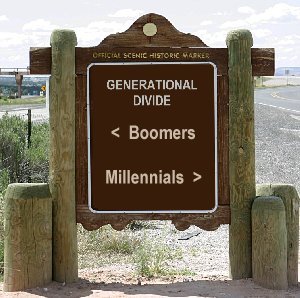 There is a divide widening between the Baby Boomers and its succeeding generations, the Millennials. Both sides are frustrated and do not understand the other. What was commonplace in the Boomer generation is not so anymore, and the other generation look upon the Boomers as fossils who should be put out to pasture (and out of their way). The truth is both sides need each other if, for no other reason than to accommodate a smooth transition from one to another.

The differences between the two groups are primarily based on perspectives and priorities; to illustrate:

A Different Sense of “Class”
Office organization and decorum has changed considerably. Offices used to be very structured and tidy. This was done for two reasons: it was believed an organized office ran better if people knew where everything was, and; to demonstrate the professionalism of the office to its customers, thereby leaving a favorable impression and encouraging a longtime business relationship. Offices today are noticeably less tidy and more relaxed thereby allowing employees to think of it as a second home. Customers are no longer offended by disorganization in the workplace as it is essentially no different than their own office. Instead of encouraging craftsmanship and seeking perfection, there is now a tendency to settle for second best.

Focus of Attention
Instead of focusing on work products, the emphasis today is on the amount of time spent. Whereas the Boomers would think nothing of working nights or weekends to complete a task, their successors are obsessed with the number of hours they spend at work.

Compensation
Back in the 1970’s you could hire a programmer fresh out of college for as little as $15K/year. Not anymore. Today, college programmers expect as much as $85K or higher, plus a signing bonus of perhaps $20K. According to a recruiter friend of mine, the idea of a signing bonus originated with pro-sports. If the student-athlete can get such a bonus for joining the pros, why not everyone else? In other words, young people fully expect hefty salaries without having to demonstrate their abilities. The concept of apprenticeship is no longer accepted. This is the antithesis of yesteryear where you started low and proved your worth over time. This represents a delineation of entitlement versus responsibility. Whereas the Boomers sought responsibility in order to demonstrate their worth, the Millennials expect entitlement. Not surprising, there is no corporate loyalty, and “job hopping” is the norm today.

I’m not really sure how well history is being taught to the Millennials. Recently, I overheard a college professor of management make the observation, “The PC did away with middle management in the 1990’s.” When I asked him to explain, he admitted he had generalized a bit but insisted the proliferation of the PC led to a reduction of many types of jobs, and claimed studies suggested a reduction in middle management due to this technology. I had a hard time swallowing this. During the 1990’s there was an effort to flatten bloated organizations a la General Electric’s Jack Welch (who earned the nickname “Neutron Jack” for such efforts). Interestingly, this approach was derived from Joseph Stalin’s purges of the Soviet government, not from the proliferation of technology.

True, the PC helped reduce clerical staff, but I did not see it have much of an effect on eliminating middle management. However, it displaced clerical burdens on management; e.g. word processing, spreadsheets, etc.). Today, you do not see many secretaries in offices, which is a shame in my opinion. A good secretary could make an office run like a top. I still question the need to place clerical burdens on management. For example, consider air-travel; instead of contacting an in-house or commercial travel agent to arrange ticketing and reservations, we now spend an inordinate amount of time performing this task ourselves (with frequent screw-ups being common place). By doing so, we have substituted the professional with the amateur.

Interpersonal relationships
Whereas the Boomers were taught to master skills involving human relationships, such as persuasion, negotiation, presentations, interviewing, etc., the Millennials are more inclined to rely on technology to get their point across. Instead of trying to understand the requirements of their customers, there is more of a push to simply juggle numbers. This means people are viewed as nothing more than objects and not treated with respect.

This phenomenon regarding generational divide is essentially no different than when the Greatest Generation was being replaced by the Boomers. To the Greatest Gen, the Boomers were perceived as more permissive, more tolerant of mistakes, and somewhat lazy. This shouldn’t be surprising when you consider the Greatest Gen survived the hardships of the Great Depression and World War II. The difference though was both sides found a way to bridge the gap. To illustrate, during the 1990’s, when aircraft manufacturers cleaned house and retired their older workers, they found themselves helpless when technical problems arose (anybody remember Clint Eastwood’s “Space Cowboys”? Same idea.). Because of this, companies are not so quick to eliminate older workers in the event of a reduction in the work force.

Neither the Boomers or the Millennials understand each other and, as such, can find no room for compromise. Thereby the generational divide expands and gridlock ensues. The Boomers perceive the Millennials as addicted to technology and easily swayed by the media. They appear to lack social skills, work ethic, and empathy for others. Because of this, it should not be surprising that micromanagement is on the rise. This suggests the Millennials tend to go on auto-pilot and prefer to be told what to do.

Each generation wants to leave its mark on the world, and each sees it a little differently. Perspectives and values understandably change over time. What one generation considers normal and rational, may not be so by another. It’s called “change” which is actually quite natural. The Baby Boomers learned the practices of the Greatest Generation, adapted, and modified them to suit their needs. Not so between the Boomers and the Millennials where the younger generation is ignoring the Boomers and inventing their own sense of reality. By not studying the past though, they are likely to commit the same mistakes as their predecessors. In other words, they are doomed to learn the hard way.

The question next becomes, how will the Millennials relate to Generation Z who is now going through school and is much more imbued with technology than their predecessors. For example, 25% of two year-olds now have a smart phone. Their dependence on technology is much stronger than the Millennials. I suspect such technology addiction will cause another divide between generations, but not to the degree we are currently experiencing.

Regardless of the reason, be it parenting, the Boomers dropping the ball, the effects of technology addiction, the brainwashing by the media, or changing moral values, a growing chasm exists between the Boomers and their successors, and I can see no way of stopping it other than to simply reach out to the other side and talk, and listen as well.

NEXT UP:  50 YEARS OF THE BRITISH INVASION – Beatlemania started it on this date in 1964.

LAST TIME:  CELEBRATING THE 16TH AMENDMENT’S ANNIVERSARY  – But are we getting tired of being the whipping boys for irresponsible government spending.