You are here: Home / Archives for Brethren of ECV

This originally appeared in the Masonic Traveler blog in 2008.

Have YOU ever heard of the The Ancient and Honorable Order of E Clampus Vitus?

Neither had I. But there was a story about them in the New York Times today that linked their distant and ancient past to that of Freemasonries… Well, not really, they just said that they came about as a parody of “…more serious minded groups like the Oddfellows and the Freemasons”.

It was, I suppose you could say, the poor miners version of Masonry back in the 1800’s

In some ways too, they could be the Shrine’s 2nd cousin as its said that they stem from the Gold Rush Era of quick and dirty shanty towns, whose purpose eventually took on the hallmarks of caring for the sick and injured members and to the caring for of widows and orphans. Not that the Shrine originated in shanty towns, but that its less about the ritual and more about the charity and fun. 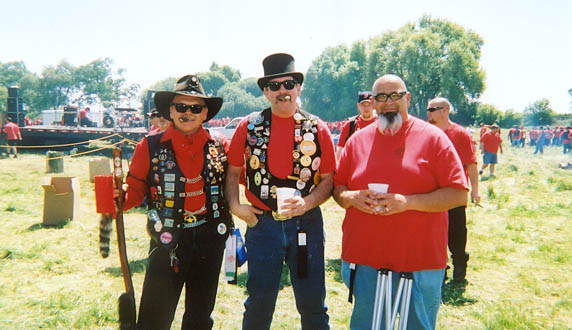 And from the looks of it, the E Clampus Vitus like to party…Be warned, the page these images originated from is not for the faint of heart (sadly, the original page is gone). 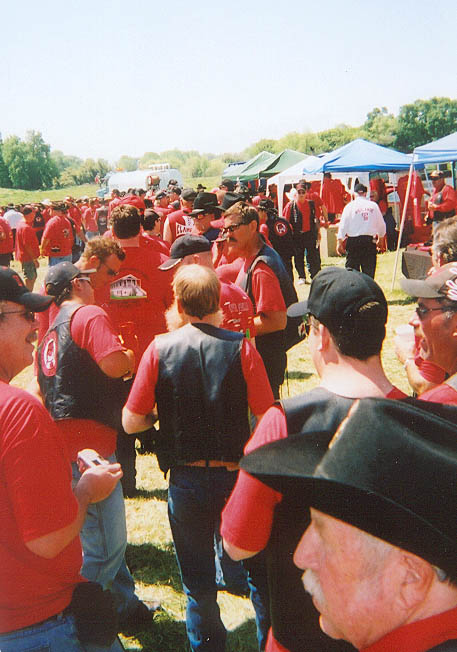 But its not until you get into the meat and potatoes of their initiation and ritual that you really start to see the parallels to Masonry…fancy titles and all that. 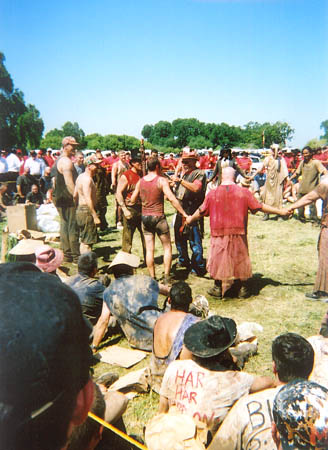 Besides, they get to wear some really cool bling…

And, by their own admission, the purpose of the society are well known: Members swear to take care of the Widows and Orphans — especially the Widows.

And, if you want to be a Clamper?  A chapter website says it all:

The prime requisites to becoming a Clamper are a good sense of humor, an interest in Western history, an open mind, and a cast iron stomach. If a man has those qualities, and strikes up a friendship with a Clamper or two, he may find himself taken in to (and by) the Ancient and Honorable Order. But one can’t simply walk up and say, “Can I be a Clamper?” It is for the Brethren of ECV to invite prospective members to join. And if a man is asked, he should know that the invitation is only given once. If it is refused, it is never tendered again. But a man of any intelligence and character so invited would hardly be likely to turn down such a signal honor. And remember, as the Brethren of E Clampus Vitus maintain, Clampers are not made, they’re born. Like gold, they just have to be discovered.

They are a fraternal organization dedicated to the study and preservation of Western Heritage, in particular the history of the Mother Lode and gold mining regions of the area. There are chapters in California, Nevada and other Western states. Members call themselves “Clampers.” The organization’s name is in Dog Latin, and has no known meaning; even the spelling is disputed, sometimes appearing as “Clampusus”[citation needed], “Clampsus”, or “Clampsis”. The motto of the Order, Credo Quia Absurdum, is generally understood as meaning “I believe it because it is absurd.”; the proper Latin quotation Credo quia absurdum est, is from the Christian apologist Tertullian (140-230), who rejected rationalism and accepted a Gospel which addressed itself to the “non-rational levels of perception.”

By tradition, a man can only become a Clamper by invitation. However, one can express his desire to join. Initiation rites are sometimes spur-of-the-moment, such as forcing a blindfolded candidate to be lifted into the air by a block and tackle. Other times, the blindfolded initiate is seated upon a wet sponge in a wheelbarrow, and taken upon the “Rocky Road to Dublin” (a ladder lying on the ground). The initiations are secret and vary greatly in execution and severity. Once he has been asked to answer several questions, the Scales of Darkness (the blindfold) are removed, the new member “sees the light”, is handed the Staff of Relief, is presented the Stone of Enigma, and appointed Chairman of the Most Important Committee. Afterward everyone toasts the new member with drink. Once enlightened,a brother is a brother for life.

And from Phoenix Masonry on their ritual:

The Order of Initiatory Functionaries

The Order and Liturgy of Initiation

N.G.H. raps with his Clampregnant Scepter for order.
N.G.H.: Let there be Order in the Hall of Comparative Ovations.
Let all the Brethren maintain seemly decorum.
N.G.H. solemnly raps again three times.
Grand Musician, sound the Hewgag.
G.M. stentoriously sounds the Hewgag.
Grand Noble Recorder, what is the occasion of this riotous assemblage?
G.M.R.: Noble Grand Humbug, without yon impenetrable portal there attend certain Supine Suckers, without honor, shame or sense, who have nevertheless signified their aspiration to become members, even Brothers’ of our Ancient and Honorable Order.
N.G.H.: Have these brazen individuals made fitting and appropriate supplication?
G.V.R.: Verily, sir, they have.
N.G.H.: Have they deposited the prescribed treasure?
G.N.R.: Their gold dust is securely within our custody.
N.G.H.: Are they attended by the Clamp Functionaries thereunto privileged?
G.V.R.: They are indeed.
N.G.H.: Clamps Vitrix, have these pitiable wretches been duly interrogated?
C.V.: Verily, sir, they have.
N.G.H.: And are their responses satisfactory?
C.V.: Such, sir, is the report I have received.
C.: Well, sons, what the Heck are we waiting for?
N.G.H.: Yea, Brethren, what might in anywise necessitate delay?
G.N.R.: Naught, sire, save the Hewgag’s mournful Bray.
C.: In due course let her Bray, but first make due obeisance to him from whose unpublished, nay unwritten words, arises our Brotherhood’s Clampotent liturgy Our Worthy Patron Vitus.
All Functionaries bow and tip hats. N.G.H. raps thrice with his scepter.
N.G.H.: Rise, Brethren of E Clampus Vitus.
All rise.
C.: Repeat after me HAIL VITUS, NOBLE CLAMPATRON.
ALL: HAIL VITUS, NOBLE CLAMPATRON.
C.: Give unto him the Sign of the Well Jackass. All give the sign with vigor.
N.G.H.: Let us repeat his words CREDO QUIA ABSURDUM. I believe because it is absurd.
ALL: CREDO QUIA ABSURDUM. I believe because it is absurd.
N.G.H.: And our benevolent motto PER CARITATE VIDUARIBUS.
ALL: PER CARITATE VIDUARIBUS.
N.G.H.: ORPHANIBUSQUE.
ALL: ORPHANIBUSQUE.
N.G.H.: SED PRIME VIDUARIBUS.
ALL: SED PRIME VIDUARIBUS.
N.G.H.: For the benefit of widows and orphans, but more especially of widows.
Let us repeat the majestic Password THE HEWGAG BRAYS.
ALL: THE HEWGAG BRAYS.
N.G.H.: And the memorable Response BEFORE OR AFTER THE FULL MOON.
ALL: BEFORE OR AFTER THE FULL MOON.
N.G.H.: Brethren of E Clampus Vitus, it is for you to signify whether the Hewgag shall be sounded and these miscreant malefactors immolated. What say the Brethren?
ALL: Satisfactory!
G.N.R.: And so recorded.
and so on…

It actually seems pretty passive and a good tongue in cheek way to celebrate history with your friends and not worry about the apron strings or the height of the fez.Instead you can just roast some weenies and marsh mellows and let the hair down while your Clampin.

END_OF_DOCUMENT_TOKEN_TO_BE_REPLACED

In this final installment of the Faith Hope and Charity series, we consider the symbolism of charity, or perhaps better called love. It is this attribute that … END_OF_DOCUMENT_TOKEN_TO_BE_REPLACED

In this installment of the Symbols and Symbolism of Freemasonry, we examine the text of Albert Mackey's Encyclopedia of Freemasonry on the symbolism of … END_OF_DOCUMENT_TOKEN_TO_BE_REPLACED

In this installment of the Symbols and Symbolism of Freemasonry, we consider a reading of Albert Mackey's text on the subject of Faith as it pertains to … END_OF_DOCUMENT_TOKEN_TO_BE_REPLACED

In this edition of Freemason Information’s Symbols and Symbolism we consider, together, the four cardinal virtues of Freemasonry as gathered form Albert … END_OF_DOCUMENT_TOKEN_TO_BE_REPLACED