You are here: Home / Archives for bureaucracy

What we can learn from a famous whistle blower from yesteryear.
BRYCE ON SEEKING THE TRUTH 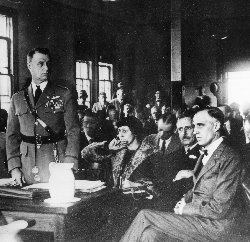 We’ve been hearing a lot about whistle blowers lately, particularly Edward Snowden, the NSA contractor who ignited the U.S. surveillance program scandal. There are also the whistle blowers involved with the Benghazi scandal and the IRS intimidation program. Whistle blowers have actually been with us a long time. In my life, it goes back to Daniel Ellsberg who in 1969 released the “Pentagon Papers” to the “New York Times,” detailing the military activity in Viet Nam under LBJ and Nixon. This, of course, ultimately triggered Watergate. However, let’s go a little further back in time to 1925 when the Army instigated a court-martial against Colonel Billy Mitchell, an episode which has quickly been forgotten in history, but has an important bearing on the whistle blowers of today.

Although Mitchell is primarily credited for building Air Power in this country, his military history goes as far back as the Spanish-American War where he served as the youngest Army officer (at age 18). Mitchell’s notoriety though began during “The Great War” (WWI) where, as Major, he became the first American officer to come under fire in the trenches of France. During the war, he earned several decorations and citations. More importantly, it was in France where he developed his fascination and passion for the airplane as a military weapon.

Mitchell understood the potential of the airplane. His superiors did not, and saw it as nothing more than a trivial instrument for observing enemy forces. They laughed at him when he claimed airplanes could sink a ship by dropping bombs on it. At the time, battleships were considered invincible. He finally got an opportunity to prove his claims and sank the German battleship “Ostfriesland” which was to be scuttled following the war. Nonetheless, the military was unimpressed. Following the war, in peacetime, there was an emphasis on shrinking the military. Even though Mitchell begged for money for research and development, he was ignored. He even urged the military to form a separate branch dedicated to an air service, but was denied. Consequently, American Air Power diminished almost to obscurity. The English, French, Italians, even the Germans had far superior airships than the Americans, and Mitchell made sure the newspapers knew about it.

Knowing Mitchell’s image was growing larger in the press, the military sent him on assignments in order to make him disappear. In 1924 he was sent to study military defenses in the Pacific. During this time, he visited Japan and witnessed firsthand how the Japanese were embracing Air Power and realized America was far behind their counterparts. Following his tour he produced an extensive 323 page report on his assessment of American defenses in the Pacific. It was in this prophetic report that he predicted how Japan would attack Pearl Harbor with remarkable accuracy. Even though the military dismissed his report as ridiculous, Mitchell’s predictions would come true 17 years later. Nonetheless, he was buried again by the military.

One year later, in 1925, the Navy dirigible “Shenandoah” was destroyed in a storm in Ohio, with a loss of thirteen lives. Mitchell was outraged as he knew the ship was archaic and denounced the Navy for its “almost treasonable” attitude towards aviation:

As a patriotic American citizen, I can stand by no longer and see these disgusting performances…at the expense of the lives of our people and the delusion of the American public. We may all make mistakes but the criminal mistakes made by armies and navies, whenever they have been allowed to handle aeronautics, show their incompetence…This, then, is what I have to say on the subject, and I hope that every American will hear.(1)

Although Mitchell became a hero to the American people for his bold statements, his superiors felt otherwise and was given a court-martial for insubordination. Actually, the court-martial was what Mitchell was hoping for as he figured it was the best way to bring attention to the problem and create change. The case garnered a lot of attention in the press, and many notable proponents of Air Power testified on his behalf. In the end though, Mitchell was suspended from the Army for five years. Instead, Mitchell resigned in 1926 and spent the remainder of his life speaking on behalf of Air Power. He would die in 1936 never knowing how accurate his predictions would become in World War II. In 1942, President Roosevelt, recognized Mitchell’s contributions to Air Power by restoring his status and elevating him to the rank of Major General. In 1946, he was awarded the Congressional Gold Medal, “in recognition of his outstanding pioneer service and foresight in the field of American military aviation”…10 years after his death.

There are some similarities, as well as differences, between Billy Mitchell and Edward Snowden. Both tried to do what they perceived to be right. Mitchell was a visionary who used his court-martial to draw public attention to the problems of Air Power. Snowden is not a visionary. He just stumbled on a problem and reported it. Whereas Mitchell stood and took his medicine as a military officer, thereby garnering the support of the American people, Snowden took flight as he didn’t want to suffer through a career ending court case as Mitchell did.

The big problem with becoming a whistle blower is that it doesn’t pay well. You might earn the admiration of the American people, but you must also face the wrath of the establishment. For example, State Department witnesses in the Congressional hearing on Benghazi have reported their career is essentially over. Likewise, Cincinnati IRS witnesses have allegedly been intimidated. It takes someone with a lot of character to stand up and report a problem, whether it be in the corporate world or government. The prime difference between Billy Mitchell and Ed Snowden is simple: Mitchell stood and took his medicine; Snowden has not. Understand this though, the American Air Power we knew today can be directly attributed to the efforts of Billy Mitchell. Had he not spoken up when he did, our air defenses would have been primitive by the start of World War II. Mitchell knew what he was talking about and would not be intimidated by the powers in authority.