You are here: Home / Archives for Capt. W.D. Matthews

There is a hot new book out here on the Prince Hall scene, “THE LOST EMPIRE, Black Freemasonry In The Old West (1867-1906) by Brother James R. Morgan III. This book tells the history of African American Freemasonry in the Old West as seen through the lens of Captain William D. Matthews and the King Solomon Grand Lodge of Kansas. 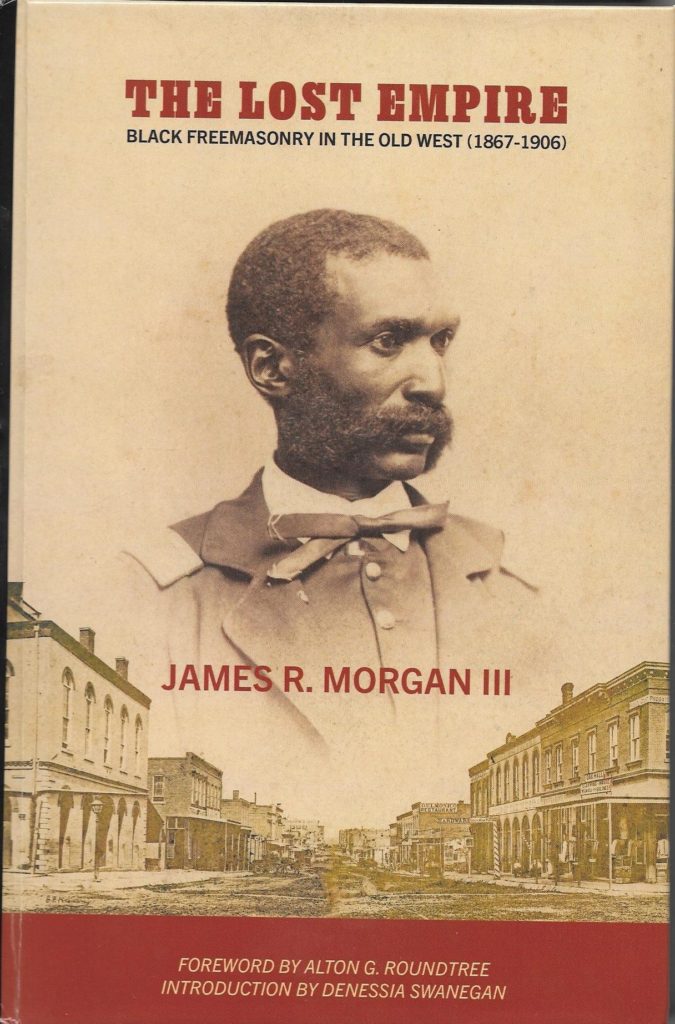 Morgan is The Grand Historian for the Most Worshipful Prince Hall Grand Lodge of the District of Columbia and an active and experienced genealogist among many other glowing accolades.

He cut his teeth doing research for two other distinguished D.C. Masons and authors, Alton Roundtree and Tehuti Evans.

The book came about when fellow genealogist Denessia Swanegan asked Morgan to help her in her ancestral research and Morgan began a research project which became an article which became a Research Paper which morphed into a full-blown book. Morgan said that once he started down this path the research information just kept coming and coming until a book more or less had to be written.

Very little had been written about Black Freemasonry West of the Mississippi River in the Wild West years. This is the first work that ties many separate facts together into a cohesive whole so that a complete story could be told. The Lost Empire has much to say about Black Freemasonry’s National Grand Lodge or National Compact. Although I won’t reveal the details so as to not spoil the story, one interesting tidbit from James Morgan really surprised me. Morgan said that one of the big reasons that the National Grand Lodge was formed was because many bogus and clandestine Black Lodges and Grand Lodges were spreading like wildfire eventually far outnumbering those Regular Grand Lodges charted by the Grand Lodge of England and tracing their heritage back to African Lodge No 459.

Into the fray charged this swashbuckling, charismatic character named Captain William D. Mathews and his King Solomon Compact Grand Lodge of Kansas. But that is all we are going to tell you. Buy the book.

The Lost Empire is a well written well researched book (It has 106 pages of Appendixes) that fills a void in hitherto unknown and unpublicized Black Masonic activity in this part of the country in the Wild, Wild West era woven into a complete story. It is as much a history book as it is a Masonic book. That makes it a must for your Historical and Masonic Library.

END_OF_DOCUMENT_TOKEN_TO_BE_REPLACED

In this final installment of the Faith Hope and Charity series, we consider the symbolism of charity, or perhaps better called love. It is this attribute that … END_OF_DOCUMENT_TOKEN_TO_BE_REPLACED

In this installment of the Symbols and Symbolism of Freemasonry, we examine the text of Albert Mackey's Encyclopedia of Freemasonry on the symbolism of … END_OF_DOCUMENT_TOKEN_TO_BE_REPLACED

In this installment of the Symbols and Symbolism of Freemasonry, we consider a reading of Albert Mackey's text on the subject of Faith as it pertains to … END_OF_DOCUMENT_TOKEN_TO_BE_REPLACED

In this edition of Freemason Information’s Symbols and Symbolism we consider, together, the four cardinal virtues of Freemasonry as gathered form Albert … END_OF_DOCUMENT_TOKEN_TO_BE_REPLACED