You are here: Home / Archives for CHASING APRONS

BRYCE ON NONPROFITS
What is more important, the institution or our vanity?

Click for AUDIO VERSION.
To use this segment in a Radio broadcast or Podcast, send TIM a request. 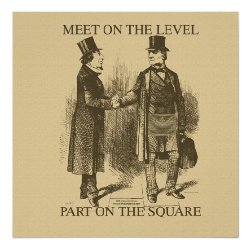 As a follow-up to my recent column on “Do Just One Thing,” I want to describe another problem involving nonprofit organizations, and that is “Chasing Aprons.” This is an expression derived from Freemasonry, the ancient fraternity. For those unfamiliar with the Craft, it is customary for Masons to wear a plain white leather apron at our meetings, symbolizing the aprons worn by workmen years ago. We are admonished there is nothing more ancient or honorable than the plain white apron, yet there are other more decorative aprons awarded as gifts to Masonic officers. Over the years, such aprons have become coveted as a means of identifying a Mason of influence. Unfortunately, some Masons desperately pursue these ornate aprons only to denote their authority, not for accomplishing anything of substance, hence the expression “Chasing Aprons.”

The Masons are not alone in this regards as I have seen similar situations in other nonprofit groups. For example, I remember attending a party when I moved into my neighborhood and a man approached me with some swagger saying, “Hi, I’m John Doe, President of the homeowner association” (it was kind of like, “Hi, I’m the Head Raccoon”). He winked at me, then turned away to glad hand someone else. Frankly, I burst out laughing as he thought he was impressing me. In reality, this same gentleman ran the homeowner association right into the ground and nearly bankrupted it.

At some of the I.T. related associations I was involved in, there would be the usual officer titles, such as President, Vice President, Secretary, and Treasurer, but then there are higher titles such as “Division Director” as you now oversaw several chapters as opposed to just one. There are other names for this, such as “District Deputy” or “Inspector,” but you get the idea. Such titles denote a loftier position and are either given to people to perform a legitimate responsibility or awarded as gifts to cronies.

I have seen people “Chasing Aprons” in just about every nonprofit group I’ve been involved in, be it fraternal, political, professional, educational, even in sports clubs, such as those related to baseball, softball, football and soccer.

I have found people who covet such titles tend to be more consumed with the title, and less about the responsibility associated with it. This is essentially no different than in business where people yearn for a job title for political reasons as it will look good on a resume. I tend to see such people as rather shallow. They never accomplished anything of substance in their life, so the appeal for recognition through titles and aprons is irresistible to them. Whenever I run into people like this, who obviously don’t know what they are doing, I tell others to give the person the title or apron and get them out of the way as they will only inhibit progress.

As an aside, I wonder how many people would volunteer their service if there wasn’t a title or apron involved? It would be an interesting experiment to see if people care more about the institution they belong to or are in it for themselves.

Obviously, this is all about the human ego. In Freemasonry, we are taught the importance of the title of “Brother” as it is a fraternity, a Brotherhood. There are many other impressive sounding titles associated with the Masons, but nothing more important than the simple designation of “Brother” and the plain white leather apron.

Just remember, being called a “thoroughbred” doesn’t change the fact that a jackass is a jackass.

Tim Bryce is a writer and the Managing Director of M&JB Investment Company (M&JB) of Palm Harbor, Florida and has over 40 years of experience in the management consulting field. He can be reached at timb1557@gmail.com

Listen to Tim on WZIG-FM (104.1) in Palm Harbor,FL; Or tune-in to Tim’s channel on YouTube. Click for TIM’S LIBRARY OF AUDIO CLIPS.

END_OF_DOCUMENT_TOKEN_TO_BE_REPLACED

Raised to a Master Mason in 1908, at Harmony Lodge No. 17 in Washington, DC, Carl H. Claudy  served as the Master and eventually as Grand Master of Masons … END_OF_DOCUMENT_TOKEN_TO_BE_REPLACED

In this final installment of the Faith Hope and Charity series, we consider the symbolism of charity, or perhaps better called love. It is this attribute that … END_OF_DOCUMENT_TOKEN_TO_BE_REPLACED

In this installment of the Symbols and Symbolism of Freemasonry, we examine the text of Albert Mackey's Encyclopedia of Freemasonry on the symbolism of … END_OF_DOCUMENT_TOKEN_TO_BE_REPLACED

In this installment of the Symbols and Symbolism of Freemasonry, we consider a reading of Albert Mackey's text on the subject of Faith as it pertains to … END_OF_DOCUMENT_TOKEN_TO_BE_REPLACED