You are here: Home / Archives for conspiracy 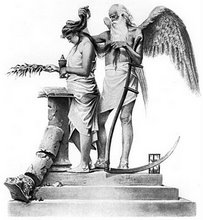 Freemasonry will never be extinguished by outside forces. Tyrants, religious zealots, conspiracy theorists, and the jealous have attempted to stamp out the oldest fraternity and have repeatedly failed. At times the Society of Freemasons has gone into ultra-secret mode when faced with attack and this simple defensive mechanism enabled it to survive until the storm passed. Freemasonry can be killed, however, in two ways – one of which is not realistically going to happen anytime soon.

Freemasonry can die simply because it is no longer needed. That would require, however, an unprecedented and unlikely — at least in the imaginable future — change in all of human society. All humans would have to actively seek enlightenment while dealing with each other on the level. Humankind is nowhere near this utopian ideal.

The other, more possible, cause of death would be as the result of Masonic suicide. Masonic suicide could come in many forms, but the very real potential scenario involves making the mistake of thinking that humankind has reached that utopian level previously mentioned. If a large segment of the Freemasonic fraternity  believing that all of mankind is ready for the teachings of Freemasonry — pushes for the inclusion of all people into the organization, an unraveling of the very fabric of the fraternity could easily occur. To understand how this could happen, an examination of what makes Freemasonry work is necessary.

Like any fraternity, Freemasonry is a collection of — despite some amount of diversity — a gathering of like-minded men. The Brethren of the Craft must have, by necessity, some common ground even before they became members of the Fraternity. Without this basic foundation there could be no way to keep the fraternity from crumbling into chaos. An easy example of a portion of this common ground is a belief in a Supreme Being. Without this belief — held by all the members of Freemasonry — there would be no starting point. There would be no foundation. There can certainly be organizations without this important building block but they just can not be classified as Freemasonic.

Another important aspect of why Freemasonry works and sustains herself is the existence of a structure – a government. Though there is no doubt that Freemasonry contains a philosophy, one would be remiss if he did not recognize that it is — first and foremost — a structured government. It is a society that has a philosophy. The rules, regulations, and diplomatic protocols drive the philosophy — not the other way around. The governmental side of Freemasonry is what keeps the philosophy from becoming fractured and it also ensures that the common ground, or foundation, remains intact. Without the governing structure, the philosophy of Freemasonry would quickly splinter into many different philosophies as individuals attempt to remake the Fraternity into their own images.

If large enough numbers of the Brethren start failing to recognize the importance of the governmental side of Freemasonry and its role in maintaining the foundation and the philosophy, fraternal suicide is imminent. Chaos will replace Freemasonry as she splinters and fractures herself to death. Those Masons of yesteryear that orchestrated the union between the Ancients and Moderns understood this concept, as well – to a certain extent – as did the ones that arranged the creation of the United Grand Lodges of Germany. Freemasons of the past worked hard to correct the fractures and splinters and Freemasons of today should not allow the fraternity to travel that road again. Correction may not be possible the second time around.

Do you agree with these sentiments, or are they a limiting factor in the growth of the fraternity?

You can find more from the Palmetto Bug at the Masonic Line.

END_OF_DOCUMENT_TOKEN_TO_BE_REPLACED

In this final installment of the Faith Hope and Charity series, we consider the symbolism of charity, or perhaps better called love. It is this attribute that … END_OF_DOCUMENT_TOKEN_TO_BE_REPLACED

In this installment of the Symbols and Symbolism of Freemasonry, we examine the text of Albert Mackey's Encyclopedia of Freemasonry on the symbolism of … END_OF_DOCUMENT_TOKEN_TO_BE_REPLACED

In this installment of the Symbols and Symbolism of Freemasonry, we consider a reading of Albert Mackey's text on the subject of Faith as it pertains to … END_OF_DOCUMENT_TOKEN_TO_BE_REPLACED

In this edition of Freemason Information’s Symbols and Symbolism we consider, together, the four cardinal virtues of Freemasonry as gathered form Albert … END_OF_DOCUMENT_TOKEN_TO_BE_REPLACED