You are here: Home / Archives for cynic 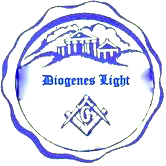 Diogenes (c. 412- c. 323 B.C ) was a very playful philosopher who liked to use great wit when challenging the values and beliefs of his fellow citizens in ancient Athens.    He lived in great poverty, probably begging and stealing his food, and steadfastly disdained all forms of luxury.   It was because of his determination to follow his own dictates and not adhere to the conventions of society that he was given the epithet “dog,” from which the name “cynic” is derived. [i]

As a lover of history I am always looking for masonic connections. Lately I have come across some writings of Diogenes and they immediately struck a cord. I am a mentor at my lodge and I always stress to every candidate that masonry isn’t a service club. It is more an individual effort rather than a group effort that makes you a mason. This doesn’t come over night; it takes some time even years to fully realize the commitment to your own personal growth. Eventually you will have an epiphany and realize that what you do in your daily life is linked directly to your masonic thinking.

Masonic growth has had its ups and downs over the centuries; the latest growth surge was just after the Second World War, however by the end of the 1960’s masonry’s growth had slowed and the next decline had started. The seventies and eighties saw several generations by passing joining the order as it appeared too old and too conformist. However with the spread of the internet and a growing middle age population who were now yearning for a purpose in a very fast paced society, people are beginning to try and make sense out of their lives. Masonry once again has become a beacon to those who wish to find themselves and a purpose in their hectic lives.

There have been many changes to freemasonry over the centuries that we all have taken for granted and all too often you hear that tired old refrain “this is how its always been done”. Well it may have in the past but now is the present and the future is waiting to greet us tomorrow. I hope by looking at the teachings of a great philosopher such as Diogenes we can learn that change rests on the individual and is timeless. So I have selected some very choice teachings of Diogenes and over the next while I shall compare them to the principles of masonry and show how we can make ourselves better masons and individuals.

Plato was discoursing on his theory of ideas and, pointing to the cups on the table before him, said “While there are many cups in the world, there is only one ‘idea’ of a cup, and this cupness precedes the existence of all particular cups.”

“I can see the cup on the table,” interupted Diogenes, “but I can’t see the ‘cupness.'”

“That’s because you have the eyes to see the cup,” said Plato, “but”, tapping his head with his forefinger, “you don’t have the intellect with which to comprehend ‘cupness’.”

Diogenes walked up to the table, examined a cup and, looking inside, asked, “Is it empty?”

“Where is the ’emptiness’ which precedes this empty cup?” asked Diogenes.

Plato allowed himself a few moments to collect his thoughts, but Diogenes reached over and, tapping Plato’s head with his finger, said “I think you will find here is the ’emptiness’.”

I find this one of the greatest lessons a Mentor has to learn. Plato disdained Diogenes, he thought him to be uncouth and called him a “dog” or in Greek “cynic”. But the lesson taught by Diogenes is most arguments are made from false assumptions. Plato deemed that the purest form, or ideal, of the cup was in the minds eye and that the cup before them was but an imperfect copy and to further his line of logic the most imperfect was a picture of the cup drawn by an artist.

But Diogenes pointing out the empty cup found the chink in Plato’s logic and I have no doubt with great glee pointed out where to find the ideal emptiness! A few years ago I made the mistake of accepting an interesting paper “Joshua’s Missing Day” to use for lodge education with out checking its facts. I had my Plato moment when I received an email several days later that informed me that though the paper sounded good it was indeed fact less. I could have found this out had I just researched it before I used it. Strangely enough it can be found on Snopes.com, an urban legend website.

Many of us who joined masonry 25 or more years ago now find we are the mentors of the younger members of our lodges. Not all want this responsibility however for those who take up the challenge there is a constant need to educate ourselves so we don’t; first, fall into the trap of assuming masonry is unchanging and second, that we realize we have the power to make  change.

If the mentoring is done properly the student will suddenly get that epiphany that brings Freemasonry into sharp focus. As a Mentor of young minds, whether the candidate is 21 or 101, you must always be sure of your teachings. Everyone has their own ideas as to what Masonry is, but it is up to the mentor to make sure they have the right idea. You can’t just say the Principles are Truth, Relief and Brotherly Love; your actions have to be their shining example! That way no one can come up to you and tap you on the head and say Freemasonry is an empty cup. We must study the history of freemasonry and we must also interpret it to today’s society.

Masonry should not be a stagnant unchanging society. Its principles are universal and it in some part should change, however it does get stuck and needs a push from time to time and that’s the job of good mentors.

[i] From the web site of David Quinn

A man is not measured by how tall he stands,

But by how often he bends to help, comfort and teach!

END_OF_DOCUMENT_TOKEN_TO_BE_REPLACED

Raised to a Master Mason in 1908, at Harmony Lodge No. 17 in Washington, DC, Carl H. Claudy  served as the Master and eventually as Grand Master of Masons … END_OF_DOCUMENT_TOKEN_TO_BE_REPLACED

In this final installment of the Faith Hope and Charity series, we consider the symbolism of charity, or perhaps better called love. It is this attribute that … END_OF_DOCUMENT_TOKEN_TO_BE_REPLACED

In this installment of the Symbols and Symbolism of Freemasonry, we examine the text of Albert Mackey's Encyclopedia of Freemasonry on the symbolism of … END_OF_DOCUMENT_TOKEN_TO_BE_REPLACED

In this installment of the Symbols and Symbolism of Freemasonry, we consider a reading of Albert Mackey's text on the subject of Faith as it pertains to … END_OF_DOCUMENT_TOKEN_TO_BE_REPLACED