You are here: Home / Archives for dues cards 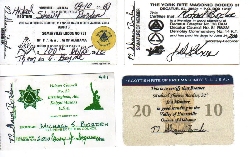 Among the nonprofit organizations I belong to, there is one where I serve as secretary of the local branch. Like any nonprofit, there are records to be maintained, dues notices to be issued, reports to be filed with headquarters, minutes to be taken, and different mailings made to the membership. It’s not exactly rocket science. When I assumed office, I implemented a data base management system (DBMS) to track membership records and generate reports and mailing labels. I also send as much documentation as possible by e-mail in order to save money on postage and printing costs. All of this has saved us considerable time, effort, and money.

Over the last couple of years I’ve noticed our headquarters has changed the way they produce the annual dues cards and notices for the local branches. Prior to this, the dues notices were printed on a 80 column high speed printer on special carbon stock that formed an envelope and insert. All that was necessary was to burst the envelopes along the perforation marks, slap a stamp on it, and throw it in the mail. The envelope and enclosed dues notice may not have been graphically dazzling, but it worked quite well for many years. Likewise, dues cards were printed on the same high-speed printer which were also burst and separated along perforation marks. Again, the card wasn’t the most elegant from a graphical perspective, but it wasn’t bad either.

This all changed recently where the dues notices, cards, and mailing labels are now printed on special stock and are graphically impressive. The problem though is they are cumbersome to separate, fold, and insert in envelopes (which we now have to purchase separately). In other words, what was once a relatively simple task had become more labor intensive, costing more time and money to perform. The big question is, Why? What was headquarters trying to accomplish? To perhaps produce a better looking card that is stored and forgotten in a wallet? To produce a better looking dues notice for the post office? As someone who has been in the systems business for a number of years, I suspect the old approach was considerably cheaper to perform.

The scenario I describe herein happens every day not just in nonprofit organizations, but in corporations around the world. If anything is constant, it is change (Bryce’s Law). We live in a perpetual state of change where our systems change, our businesses change, our people change, and our technology changes. Change is natural and can be caused by a variety of reasons, such as government regulations, competition, economics, etc. The point is, you change when it is absolutely necessary to do so, not just because you contrarily feel like doing so. Change for the sake of change is madness. The example I describe is one where change is implemented merely to appear fashionable. There was no other reason as the old approach was working just fine, thank you. The point is, you should change only when it is cost effective to do so. This means it is necessary to demonstratively prove you offer a better solution; saving money or time, or perhaps a totally new avenue aimed at addressing specific business needs. In the case I described, I do not believe the developers did their homework and, because of this, have complicated the lives of many branch secretaries; all because someone wanted to show he was being fashionable with technology, which is perhaps the worst reason for change (yet is quite common). Always remember, there is a heavy price to pay for keeping up with the Jones’.

I can tell you authoritatively, whoever redesigned the dues notices and cards at headquarters was certainly not a systems man. Probably nothing more than a glorified programmer in sheep’s clothing.

END_OF_DOCUMENT_TOKEN_TO_BE_REPLACED

In this final installment of the Faith Hope and Charity series, we consider the symbolism of charity, or perhaps better called love. It is this attribute that … END_OF_DOCUMENT_TOKEN_TO_BE_REPLACED

In this installment of the Symbols and Symbolism of Freemasonry, we examine the text of Albert Mackey's Encyclopedia of Freemasonry on the symbolism of … END_OF_DOCUMENT_TOKEN_TO_BE_REPLACED

In this installment of the Symbols and Symbolism of Freemasonry, we consider a reading of Albert Mackey's text on the subject of Faith as it pertains to … END_OF_DOCUMENT_TOKEN_TO_BE_REPLACED

In this edition of Freemason Information’s Symbols and Symbolism we consider, together, the four cardinal virtues of Freemasonry as gathered form Albert … END_OF_DOCUMENT_TOKEN_TO_BE_REPLACED