You are here: Home / Archives for Dunedin 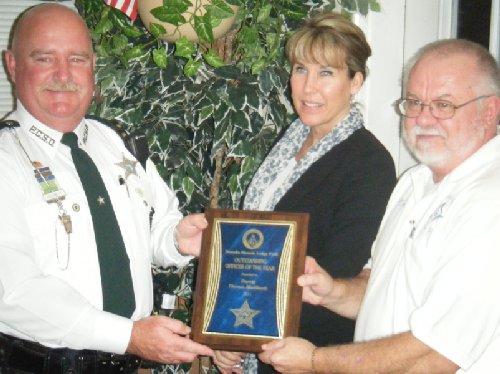 DUNEDIN, FL, USA (November 28, 2011) – As has become a tradition for the last seven years, Dunedin Masonic Lodge No. 192 recognized a Pinellas County Sheriff’s Deputy for outstanding service to the community. The 2011 “Deputy of the Year” award was presented to Deputy Tom Hoddinott at a special dinner held at Kally-K’s Restaurant in Dunedin.  Making the presentation was W:.Ken Giesow, PM  of Dunedin Lodge. Also in attendance was Major Wayne Morris, Deputy Hoddinott’s supervisor, along with fellow officers from the Pinellas County Sheriff’s Office.

According to the Pinellas County Sheriff’s Office, “Deputy Tom Hoddinott has been a Pinellas County Sheriff’s deputy since July 1985. He started out in the Detention and Corrections Bureau and has served in various capacities with the agency including Patrol Operations and the Criminal Investigations Division where he worked in the Property Crimes Section assigned to the City of Dunedin. He is currently assigned to the Patrol Operations Bureau working out of the North District Station on Dayshift.”

On August 26, 2011 Deputy Hoddinott was on patrol in the City of Dunedin driving north on Pinehurst Road. Deputy Hoddinott noticed a suspicious vehicle backed into the driveway of a residence.  Upon investigation, he discovered and broke up a major marijuana farm being grown inside the residence.  Based on the Deputy’s intuition, coupled with his many years of experience, resulted in an excellent self-initiated criminal case being made. The male who burglarized the home was arrested for Residential Burglary and Violation of Probation and the owner of the house was arrested for felony Manufacturing/Cultivation of Marijuana. This subject was also currently on probation for a previous charge of Sale, Manufacture and Delivery of Marijuana. The equipment used to grow the marijuana was disabled and 33 marijuana plants were taken off the street. For this self-initiated act which contributed to a valuable law enforcement accomplishment, and for the outstanding work he does every day, Deputy Hoddinott was nominated to be Dunedin Lodge’s Deputy of the Year.

For his efforts, Dunedin Lodge gave Deputy Hoddinott a dinner in his honor, awarded him a plaque, and a gift of $100 which the Deputy immediately donated to the Florida Sheriff’s Youth Ranch which helps to prevent delinquency and develop strong, lawful, resilient, and productive citizens who will make a positive contribution to our communities for years to come.

According to the Master of the Lodge, W:.Mike Palenik, PM “Dunedin Lodge is proud of our long tradition of supporting local law enforcement personnel. On behalf of the Lodge, we congratulate Deputy Hoddinott and thank him for his years of service and dedication. We are proud of the PCSO.”

END_OF_DOCUMENT_TOKEN_TO_BE_REPLACED

In this final installment of the Faith Hope and Charity series, we consider the symbolism of charity, or perhaps better called love. It is this attribute that … END_OF_DOCUMENT_TOKEN_TO_BE_REPLACED

In this installment of the Symbols and Symbolism of Freemasonry, we examine the text of Albert Mackey's Encyclopedia of Freemasonry on the symbolism of … END_OF_DOCUMENT_TOKEN_TO_BE_REPLACED

In this installment of the Symbols and Symbolism of Freemasonry, we consider a reading of Albert Mackey's text on the subject of Faith as it pertains to … END_OF_DOCUMENT_TOKEN_TO_BE_REPLACED

In this edition of Freemason Information’s Symbols and Symbolism we consider, together, the four cardinal virtues of Freemasonry as gathered form Albert … END_OF_DOCUMENT_TOKEN_TO_BE_REPLACED