You are here: Home / Archives for easy

Someone check the Old charges and see if they require us to use paper plates. I’m just back from looking at them and I don’t find any reference, so I thought perhaps I would draft my own. 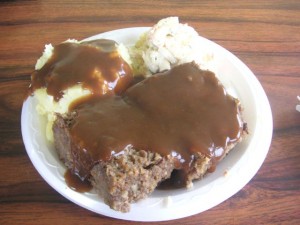 A LODGE is a place where Masons assemble and work: Hence that Assembly, or duly organiz’d Society of Masons, is call’d a LODGE, and every Brother ought to belong to one. The LODGE shall be caparisoned in SHAG CARPET and there shall be many avocado-coloured appliances – which provided they still operate shall not suffer themselves to be upgraded. INTERNET IS RIGHT OUT, as is such decoration or appurtenances that may not be made by hand or purchased for less than two SHILLINGS.

In ancient Times, the LODGE was gloriously decorated in crimson, purple, bronze and gold, but these artifices being deemed too difficult to execute by modern Masons are to be hereunto cast aside in favor of vinyl tablecloths, paper plates and paper napkins which are easier. The persons admitted Members of a LODGE must be good and true Men, free-born, and of mature and discreet Age, who may abide forever the serving of meatloaf, green bean casserole and roast beef the texture of boot leather.

There. Much better. Now, they’ll be no more harping among the young upstarts about how we need to “spruce things up a bit” or “take pride in ourselves.” We’re Masons, damn their eyes, and if we stand for anything, we stand for immovable change with an unshakable, mulish, bull-headed conviction that any and all change is not only untoward, but simply wrong.

Recently this issue came to a head when the Grand Lodge decided to hold its Warden’s School here. No problem, we’ve held the statewide Warden’s School off and on at my lodge since the 1950s – which is actually rather convenient because we still had some of the original leftovers and the menus were already printed. We’d just scratch out the names of the old Grand Masters and pencil in the names of the new ones – neatly mind you – and it took about 30 seconds worth of work, which if you ask me is time well spent for Masonry.

But then, a young Turk decided that we should change the menu and actually serve a meal that the guests would like to eat: smoked prime rib, new potatoes, that kind of stuff. Catered. Yes, you heard me, CATERED.

Now over and above the fact that this was a slap in the face to Euna Stubbs who had been cooking meals for us since Pontius Pilate, the cost was simply astronomical: $14.00 per plate. Euna and the Star Chapter only charge us $5.50 a plate and that’s always been good enough for us in the past. The young Turks told us that since Grand Lodge was going to foot the entire bill, we might as well take them up on their offer, and serve a really nice meal (another slap in the face to Euna). Well, I voted for it in lodge of course, but don’t you worry, I spent the next month bitching about it to everyone who would listen about how extravagant it was, all this folderol and for what? Dinner with the Grand Master? In my view, if you start feeding them like that, you might as well set out food for all the stray cats in the neighborhood, too, as you’ll never be shed of any of them.

Now on the night of the dinner things really came to a head. This young Turk and his wife bought linen tablecloths – I hope it was with their own money – and (get this): FRESH FLOWERS to put on all the tables. Now over and above the fact that this was a slap in the face to Beulah Longbottom who made the centerpieces we always use for banquets during the Truman administration (now THERE was a Mason – no smoked prime rib for that man), God rest her soul, she’s dead now, of course – hard to believe it’s been over thirty years ago – but I digress… she made these centerpieces, all eight of them, by hand, from plastic forget-me-nots and yellow…I dunno… spikey-looking flower thingies, and Vernon Mantooth, who was master in ’71, stapled some aluminum square and compasses onto them (he ran the plumbing supply store back then and he had one of the kids who worked for him cut them out of scrap flashing), and they’ve always been good enough in the past, but oh no! Not now.  We have to have fresh flowers. And you know what? Those fresh flowers won’t even keep a week. Beulah’s flowers have been going strong for almost sixty-five years. Progress. Yeah, right.

I was all set to start unrolling the vinyl table-cloth covering thing from the roll we keep in the boiler room. It’s like a roll of trash bags, but instead of being black, it’s white.  What?  It looks good.  Anyway, we cut it to length on each table and then tape it down at each of the four corners so that the table is covered nice and neatly. I was just getting started when all of a sudden the Jr. Warden says they want to use cloth tablecloths. I guess that saves on tape, which can be kind of expensive…you know, I’ve lobbied for years to just glue the vinyl down on each table and then after dinner is over, we can just take the tables out to the parking lot and spray them off, but it’s never gone anywhere. Anyway, so, you save on scotch tape with these newfangled cloth tablecloths, but then you have to wash them! I told the Jr. Warden this and he said he didn’t mind, he would wash them at home – which if you ask me is absolutely insane, but whatever: it doesn’t cost the lodge anything and if this guy is crazy enough to waste two hours of his time with the washer and dryer, I guess it’s OK with me.

So we have dinner, which was fine, although for $14.00 a plate, you’d think they’d give you Baked Alaska and Lobster Thermidor served by real French waiters flown over from France.  I haven’t been to a restaurant in a while – I don’t get out all that much — but last time I ate at the Diner, I could have bought half the restaurant for fourteen dollars.   Anyway, afterwards, the Grand Master and his group were very complimentary of the effort the lodge put forth, and they were specifically pleased with the meal – like they are too good for Euna’s meatloaf (another slap in the face, if you ask me), or something. But all the ladies could talk about were the fresh flowers. I tried telling one of them that it was a shame they wouldn’t last the week, but she said she didn’t mind and that she thought they were beautiful. Go figure. Now, normally we’d have been done right after this. We’d rip off the vinyl table covers, brush the crumbs off, stack the tables and chairs and then we could go upstairs and drink coffee for another two hours by ourselves, but not this time. You know why? Because some genius decided we should use real plates and silverware instead of paper plates and plastic forks. Luckily we had had about ten brothers there helping, but it still took us almost FORTY minutes to wash, dry and put all the stuff away.

The younger guys were all having fun with it, but I thought it was ridiculous. And you want to know what the worst part of it was? Grand Lodge was so “impressed” that they want us to do the same thing next year.

No good deed goes unpunished — isn’t that the truth.

But I still think gluing the vinyl table covering to the table would look a lot classier than taping it. And it would be much easier.

And that’s why we’re here, right?

END_OF_DOCUMENT_TOKEN_TO_BE_REPLACED

In this final installment of the Faith Hope and Charity series, we consider the symbolism of charity, or perhaps better called love. It is this attribute that … END_OF_DOCUMENT_TOKEN_TO_BE_REPLACED

In this installment of the Symbols and Symbolism of Freemasonry, we examine the text of Albert Mackey's Encyclopedia of Freemasonry on the symbolism of … END_OF_DOCUMENT_TOKEN_TO_BE_REPLACED

In this installment of the Symbols and Symbolism of Freemasonry, we consider a reading of Albert Mackey's text on the subject of Faith as it pertains to … END_OF_DOCUMENT_TOKEN_TO_BE_REPLACED

In this edition of Freemason Information’s Symbols and Symbolism we consider, together, the four cardinal virtues of Freemasonry as gathered form Albert … END_OF_DOCUMENT_TOKEN_TO_BE_REPLACED