You are here: Home / Archives for female 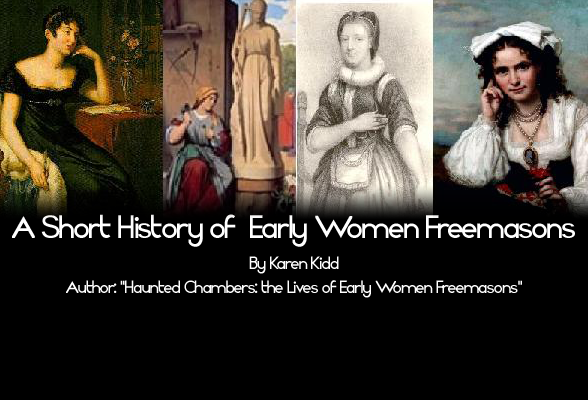 By Karen Kidd
Author of  “Haunted Chambers: the Lives of Early Women Freemasons”

Controversial American author Robert Temple observed “Technology is forbidden when it is not allowed to exist.”

“It is easy to forbid technology to exist in the past because all you have to do is to deny it. Enforcing the ban then becomes a simple matter of remaining deaf, dumb and blind. And most of us have no trouble in doing that when necessary. . . I call it consensus blindness. People agree not to see what they are convinced cannot exist.”

Temple made these comments in his paper “Forbidden Technology”, which is about optical technology, long denied by “experts”, that none-the-less existed for millennia.

“Consensus blindness” long has been the unwritten/unspoken rule among Malecraft Masons, likewise accepted by many non Masons including women, about the existence of early women Freemasons. However, just as there are lenses in Ancient Egyptian archaeological finds dating to the 4th and 5th dynasties at Abydos, so also have women Masons existed throughout all of the modern Freemasonic period[1].

Denying their existence, for centuries, was the expected norm and any Masonic historian who wrote about them had to adopt a sort of double-speak. For instance, 20th Century Masonic scholar Carl Claudy, when he wrote about women Freemasons in his “Masonic Harvest”, spent the first page of that chapter stating that women could not be Freemasons; then ten pages describing – with continual double-speak  –  the lives of those women Freemasons.

Claudy, whatever his personal opinions, had no choice but to write about early Women Freemasons in this way. Had he attempted to be more straight-forward, it likely would never have been published. In this way, Claudy and other Masonic writers kept from complete obscurity the lives of these women Freemasons.

Their existence is a fact, despite determined effort to ignore, marginalize and deny it. That effort, however, ongoing for centuries, has done its worst. The very vast majority of early women Freemasons are unknown to us. Finding them can take as much effort as it did to obscure them.

And many more. Late 19th Century Masonic history W. Fred Vernon, writing when Malecraft Masons were a bit more laid back about the subject, commented, “I have no doubt other ancient Lodges have their lady members just as ancient buildings have their haunted chambers.”[3]

I’ve heard my book is a threat to all Freemasonry, Malecraft Masonry in particular. This is no more true than admitting to the existence of their contemporary male brethren is a threat to any part of Freemasonry. All our Brethren who have passed to the Grand Lodge above, be they male or female, are to be remembered and emulated.

While none of these women were Co-Masons, they did pave the way for that part of Freemasonry. And, today, women can become Freemasons without eavesdropping, sneaking into lodges or hiding in furniture.

For more than a century, Freemasonry has operated in three parts. There is Malecraft Masonry, there is Femalecraft Masonry and there is Co- or Mixed Masonry. And we know this system can work, largely before it does.

And so it will continue with the past duly recalled. I wrote about these women to follow in the tradition of Claudy and other Masonic historians who kept their stories alive. I wrote the truth that this generation, and the next, may find worthy of remembrance.

Listen to the Masonic Central Podcast with Br. Kidd.

[1] Temple’s paper was published in the Summer 2001 edition (Issue 17) of Freemasonry Today and is available online here: http://www.freemasonrytoday.com/17/p11.php

END_OF_DOCUMENT_TOKEN_TO_BE_REPLACED

In this final installment of the Faith Hope and Charity series, we consider the symbolism of charity, or perhaps better called love. It is this attribute that … END_OF_DOCUMENT_TOKEN_TO_BE_REPLACED

In this installment of the Symbols and Symbolism of Freemasonry, we examine the text of Albert Mackey's Encyclopedia of Freemasonry on the symbolism of … END_OF_DOCUMENT_TOKEN_TO_BE_REPLACED

In this installment of the Symbols and Symbolism of Freemasonry, we consider a reading of Albert Mackey's text on the subject of Faith as it pertains to … END_OF_DOCUMENT_TOKEN_TO_BE_REPLACED

In this edition of Freemason Information’s Symbols and Symbolism we consider, together, the four cardinal virtues of Freemasonry as gathered form Albert … END_OF_DOCUMENT_TOKEN_TO_BE_REPLACED