You are here: Home / Archives for Freemasons for Dummies

This week, I was lucky enough to attend the South Dakota Grand Lodge session in Sioux Falls. I say that I was lucky because I got to see a lot of fantastic Brothers that I had not seen in a while and meet Brother Chris Hodapp, the author of Freemasons for Dummies.

Nothing terribly exciting happened during the course of the weekend. The items that we voted on were extremely mundane, but the recurring theme of the weekend seemed to be: How do we make Freemasonry the prominent and relevant organization it once was?

I watched Brothers laugh at the idea that Freemasonry was irrelevant. I watched some agree with my comments during conversations that we are in fact unimportant in society. I also watched Brother Hodapp give an excellent oration urging Freemasons to “think big.” However, this subject was never really tackled throughout the weekend. Perhaps the task of making Masonry relevant and exciting is too daunting or perhaps we are afraid to look at our reflections in the mirror. Little did I realize what was on the immediate horizon for Masonry.

Brother Hodapp made it a point to tell me that he found it humorous when my petition for membership in the South Dakota lodge of research was met with a loud clap of thunder—I found it rather funny myself. But it appears that the clap of thunder that was heard was not just a summer storm in eastern South Dakota. It appears that it was the initial rumblings of a bigger storm brewing in Freemasonry. A storm building up over the state of Georgia.

By now, you have probably read about the events occurring in the Peach State. If not, you can read them here. It was interesting to me that the issue that can make Masonry relevant was conveniently waiting for me in my email inbox when I got home. Freemasonry can become the prestigious organization that it once was by taking a stand on this issue. Every Grand Lodge should immediately remove recognition from Georgia and begin a crusade against all forms of bigotry and racism in Freemasonry. Any Grand Lodge or lodge that would not accept a non-white man or a non-Christian because of the color of the skin or the name of the God they worship must be removed from the fraternity. Prince Hall recognition must be made universal. This is every Mason’s cross to bear.

There is one right side to this issue. There is no argument about what should happen in this situation. The Grand Lodge of Georgia must throw the charges out immediately. For those of you who say “They have to follow protocol” then they should be filing charges of unMasonic conduct against the Brothers that are calling for a Masonic trial. The doors need to be thrown open. Those that don’t believe men of a different skin color can be made Masons and those that prefer to refer to black men in lodge as n*****s must be thrown out. Its time to clean house, it is time to stand up for what is right. This shouldn’t just happen in Georgia either. It should happen from the east to the west, from the north to the south. Let us make our terms clear and write them in big, clear letters on a white sign: RACISTS AND BIGOTS OUT OF MASONRY.

Forget the loopholes, throw out what any fabricated lists of Landmarks say about interfering in other Grand Lodges, ignore any stupid codes or regulations. Do what is ethical, labor for what is just, fight for what is right. 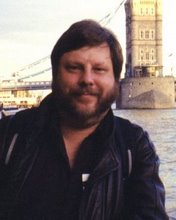 Author of the books Solomon’s Builders

and Freemasons For Dummies

and one of the strong voices for American Freemasonry today, Brother Chris Hodapp joins us on Masonic Central on November 23, 2008.

Br. Chris has been a tireless worker for the fraternity in print, as well as in his blog Freemasons for Dummies, and in lodge being one of the founders of the one of the early Traditional Observance Lodges, Lodge Vitruvian and most recently as the editor-in-chief of “the Masonic Society” journal. Chris has made great strides in making Freemasonry accessible to an increasingly curious public all while, he chides in his blog, he is looking for a “more suitable host body…”

This is going to be a fun and informative show and with a lot of insight into the world of the would-be “Dummy” of Freemasonry who is anything but.