You are here: Home / Archives for Gate City

What makes a lodge successful? Is it the energy behind the lodge, the people that create it? And, does that energy come at a cost? Is there a social capital that is bartered in an invisible exchange that at times reflects a huge value where at others it challenges its very existence.

One such lodge happens to be a nexus for this very question, and has had a year to barter and trade on its own social capital building a reputation amongst its community and amongst its peers. And this development has not been free of cost. Gate City Lodge in Atlanta Georgia has had a dynamic year, from a public forum on Catholicism and Masonry to a feature article about them in the New York Times. All in all, Gate city is not unaccustomed to controversy or at least some growing pains since its founding in 1887.

Since then, Gate City has suffered war, fire, growth and decline, all of which are no strangers to lodges of this age, yet Gate City has re-awoken as a cosmopolitan styled lodge, progressive in its ideas (even if they do not see themselves as such) and yet still as traditional as the day they fought to become the 4th lodges in the already crowded Georgian capital.

Join us Sunday, April 4th, as Masonic Central welcomes the brothers of Gate City Lodge No.2 from the beautiful city of Atlanta, Georgia. We look forward to a healthy discussion of the lodges antebellum origins and is present day revival in a city known for its diversity of population and as one of the fastest growing metropolitan areas in America. The Show will record live at 6pm PST/9pm EST at Masonic Central on Blog Talk Radio. If you have questions or comments for the brothers, you can dial in to the live show by calling 347-677-0936 during the program.

I’ll save my thoughts for the end…

TO ALL CONSTITUTENT LODGES UNDER THE CONSTITUTION OF THE GRAND
LODGE OF GEORGIA, FREE & ACCEPTED MASONS:

WHEREAS: Freemasonry has existed in Georgia since it founding in 1734 and is the oldest Fraternal organization in the State, and;

WHEREAS: Freemasonry is universal in scope, being a Brotherhood of Man under the Fatherhood of God, and;

WHEREAS: the Grand Lodge of Georgia, Free & Accepted Masons, holds membership in this worldwide Brotherhood, and;

WHEREAS: our Ancient and Honorable Fraternity welcomes to its doors and offers its privileges to men of all races, colors and national origins who believe in a Supreme Being, as stated in our Degrees and Lectures, and;

WHEREAS: no reference is made to exclude any petitioner with regard to race, color or national origin in any of the Rituals or Masonic Code authorized for use in the Constituent Lodges chartered by the Grand Lodge of Georgia, Free and Accepted
Masons, and;

WHEREAS: it is incumbent on all members of our Brotherhood to abide by the Rule’S, Regulations, Laws and Edicts of the Grand Lodge of Georgia, Free and Accepted Masons;

THEREFOR BE IT RESOLVED:
That no negative reference be made by any officer or member of any lodge chartered under the Constitution of the Grand Lodge of Georgia, Free and Accepted Masons, in reference to a petitioner’s race, color or national origin, who believe in a Supreme Being, during any Lodge communication, conferral of degrees, proficiency practice o proficiency examination;

Further, be it resolved, that it is the responsibility of the Worshipful Master of each Lodge constituted under the Constitution of the Grand Lodge of Georgia, Free and Accepted Masons, to insure and enforce strict compliance with this EDICT, an, further, to have it read at the next two communications of the Lodge after receipt by the Lodge.

Any Lodge reported in violation of this Edict will be disciplined.

Given under my hand as Grand master of the Grand Lodge of Georgia, Free and Accepted Masons, this 19th day of August, 2009.

The Resolution addresses the issue of the “incident” that took place in June about the charges brought against Gate City Lodge (see My Brothers Keeper) for their raising of  an African American to the degree of Master Mason and then allowing him to progress to an officer’s position.

Reading the above, it seems to say nothing of the charges brought, or their spurious nature, any past exclusion based on race, or impropriety of racial segregation.  Essentially, it is a safe way of saying that “we don’t promote any bias on race, religion, or color (never mind sexual orientation)” despite what people say.  Neither does it seem to suggest any acknowledgment of the bias that this edict was written to.

What do you think?  Is this enough?  Does this speak to an enlightened brotherhood of man under the fatherhood of God? Is it enough, or should it say more? 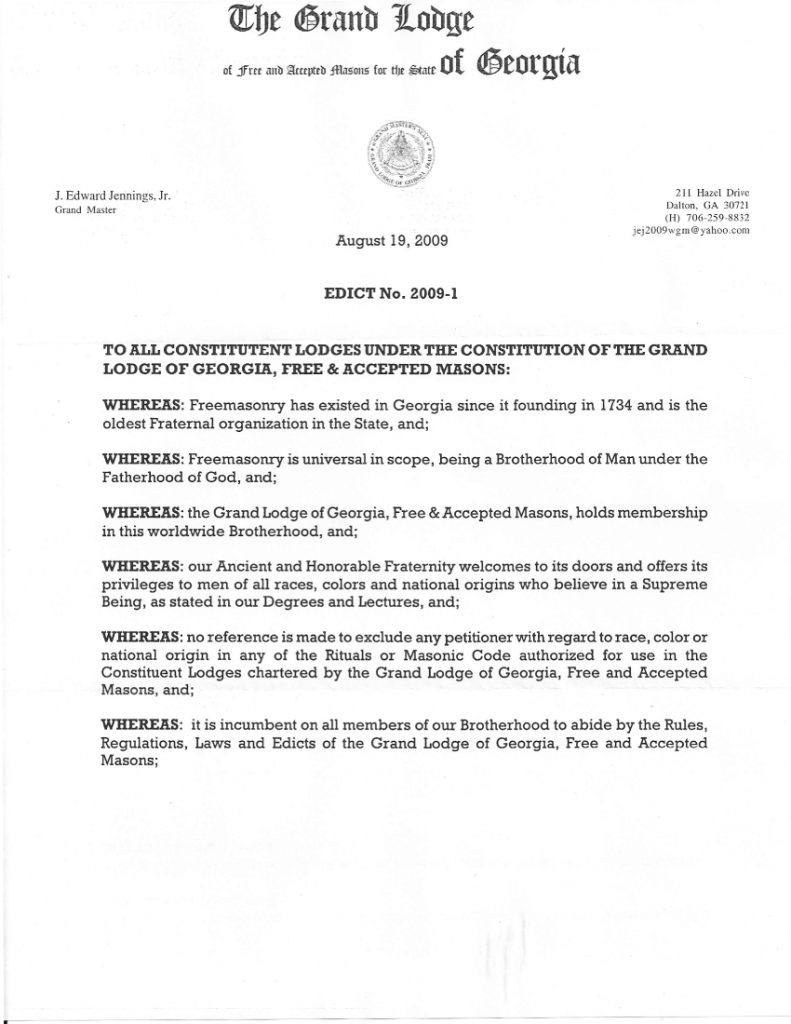 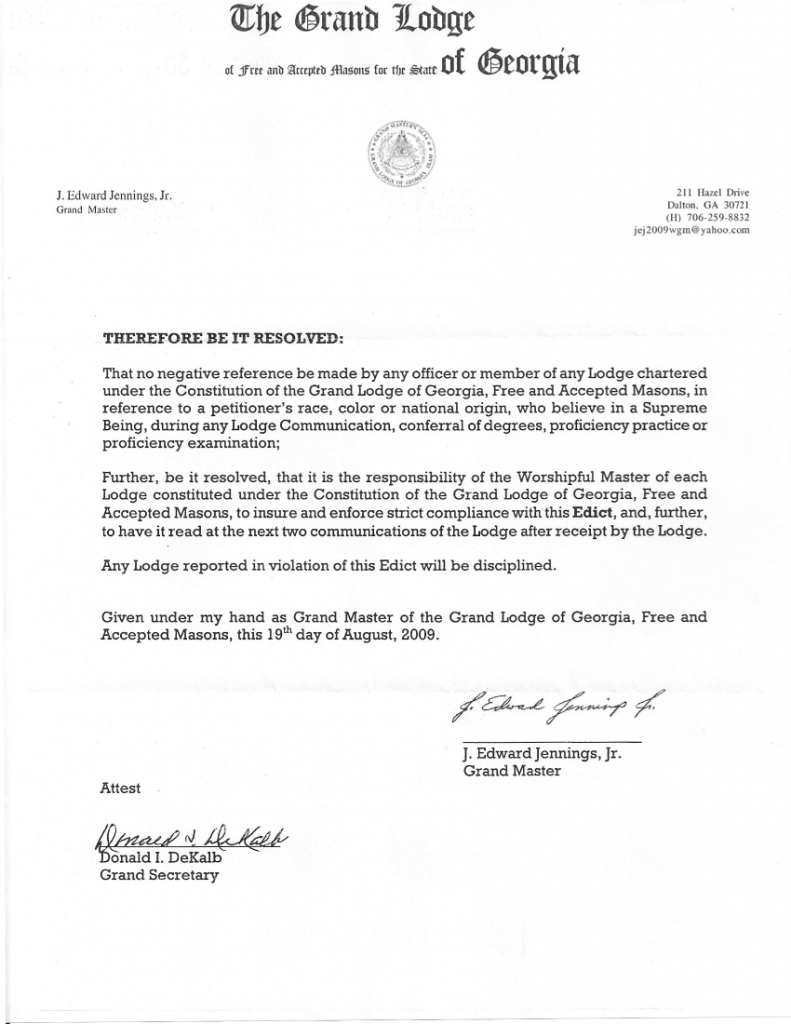 END_OF_DOCUMENT_TOKEN_TO_BE_REPLACED

Raised to a Master Mason in 1908, at Harmony Lodge No. 17 in Washington, DC, Carl H. Claudy  served as the Master and eventually as Grand Master of Masons … END_OF_DOCUMENT_TOKEN_TO_BE_REPLACED

In this final installment of the Faith Hope and Charity series, we consider the symbolism of charity, or perhaps better called love. It is this attribute that … END_OF_DOCUMENT_TOKEN_TO_BE_REPLACED

In this installment of the Symbols and Symbolism of Freemasonry, we examine the text of Albert Mackey's Encyclopedia of Freemasonry on the symbolism of … END_OF_DOCUMENT_TOKEN_TO_BE_REPLACED

In this installment of the Symbols and Symbolism of Freemasonry, we consider a reading of Albert Mackey's text on the subject of Faith as it pertains to … END_OF_DOCUMENT_TOKEN_TO_BE_REPLACED