You are here: Home / Archives for glad-hander

BRYCE ON LIFE
– It is not a frivolous gesture, but represents something significant; your word. 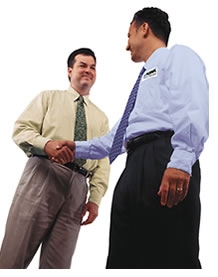 If you haven’t noticed, the handshake has been slowly going the way of the Dodo bird. If you watch sporting events, particularly at the youth level, you are more likely to see fist “bumps” or the slapping of hands as opposed to a genuine handshake. These variations of the handshake likely came from pop culture.

The handshake originated from Medieval times when combatants would greet each other with open hands, thereby indicating they were not holding any weapons and could be trusted. Over the years it has evolved into a single hand as opposed to both. With this background in mind, I always believed in giving a firm handshake and look the other person square in the eye. I am not a fan of limp-wrested handshakes, nor do I like a vice-grip shake denoting a contest of some kind. “Glad-handers” are those who work the room saying hello to everyone but not making eye contact; politicians are notorious for this.

When my son came of age, I taught him how to shake hands and greet someone. I believe he still offers a good handshake. These are things fathers need to pass on to their sons, and daughters as well.

The handshake used to mean something meaningful, specifically, your word. For years, a handshake was as good as a contract. Evidently, not so anymore. I have a friend who recently wanted to sell his Les Paul guitar. He went down to the local music store and negotiated a deal with the proprietor to sell it for him. Once they came to an arrangement, they shook on it. This surprised the proprietor who asked my friend, “Don’t you want a contract?”

My friend responded, “Do we understand each other about the terms?”

“Is your word your bond?” my friend asked.

The proprietor was taken aback and commented to my friend how this seemed unusual to him. Refreshing, but unusual. He claimed most of the young musicians frequenting his shop wanted some form of contract, and didn’t comprehend the concept of a handshake. I’m not sure why this is, I can only suspect the influence of lawyers. However, if you do not trust the person you are going to do business with, then it will not matter whether it is a written contract or a handshake. In my friend’s case, which wasn’t exactly a major business transaction, it worked out to be a mutually agreeable arrangement.

Back in the mid-1970’s, when we first started doing business in Japan, a delegation from Tokyo approached us to serve as our representatives. We found the Japanese to be tough negotiators, but after we came to consensus, a handshake was all that was necessary to seal the deal. We, of course, signed an agreement later spelling out the terms, but this was nothing more than a formality. Over the many years we did business in Japan, not once did we ever refer back to the paper agreement, just the handshake.

The declining value of the handshake represents another indication of the erosion of our morality. It means we no longer trust each other and are suspicious of the other person’s intentions. Some people will shake, slap, or bump anyone. Not me. If I do not trust you, I certainly will not shake your hand, just as the Medieval combatants wouldn’t. To me, I place a lot of value in the handshake. I would hate to believe that people today think of it as nothing more than a frivolous gesture or as a means to transmit germs.

END_OF_DOCUMENT_TOKEN_TO_BE_REPLACED

Raised to a Master Mason in 1908, at Harmony Lodge No. 17 in Washington, DC, Carl H. Claudy  served as the Master and eventually as Grand Master of Masons … END_OF_DOCUMENT_TOKEN_TO_BE_REPLACED

In this final installment of the Faith Hope and Charity series, we consider the symbolism of charity, or perhaps better called love. It is this attribute that … END_OF_DOCUMENT_TOKEN_TO_BE_REPLACED

In this installment of the Symbols and Symbolism of Freemasonry, we examine the text of Albert Mackey's Encyclopedia of Freemasonry on the symbolism of … END_OF_DOCUMENT_TOKEN_TO_BE_REPLACED

In this installment of the Symbols and Symbolism of Freemasonry, we consider a reading of Albert Mackey's text on the subject of Faith as it pertains to … END_OF_DOCUMENT_TOKEN_TO_BE_REPLACED