You are here: Home / Archives for Holy Grail 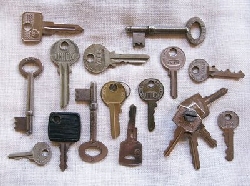 A person’s trustworthiness can be measured by the number of metal keys he possesses. Each key represents a trust or responsibility the person has committed to maintaining. I tend to believe the more keys a person has, the more he is trusted; the fewer keys he possesses, less so. I have three sets of keys I maintain; one set for my office and home, one for the Masonic Lodge where I serve as Secretary, and a set of car keys; in all, I generally carry 40+ keys which is a lot and quite uncomfortable if I try to carry them in a single pocket.

We use keys because most of us cannot remember combinations or passwords. For example, I would be hard pressed to remember combinations and passwords to replace my 40+ keys. Keys may be low tech, but they are effective for safeguarding most of our possessions, such as houses, offices, desks, equipment, supplies, vehicles, boats, garbage cans, weapons, etc. Some people believe magnetic cards are an effective alternative to keys, but I am hearing too many horror stories of people having their identities stolen through such cards. Key pads are nice too, but again you have the memorization problem to consider. Keys may be a hassle to carry, but they are probably the most cost effective solution around.

Perhaps the biggest problem with keys is we often forget what they are used for. As I mentioned, I have three sets. I know all of my car keys, but I probably only know 75% of my office/house keys. I have had them so long I frankly have forgotten what they are all used for. The big keys I can generally figure out, usually for a door of some kind, but it’s the little ones where I draw a blank. I’m sure they are for some obscure cabinets or desks I’ve long forgotten about. I may have even discarded the cabinets or desks and forgotten to throw the keys away in the process.

The same is true with my Lodge keys which I inherited some time ago. I know most of them, but there are a few that I simply draw a blank. This disturbs me greatly as I don’t like to be so disorganized, but I think all of us are in possession of a key or two (or more) which we haven’t got a clue as to its purpose.

When I assumed the Secretary’s duties, I dutifully cleaned out my predecessor’s desk. In the process, I found even more keys which looked quite old but seemed to be important. I’ve tried them on many locks but cannot seem to figure out what they are used for. I suspect one is for some secret vault where Masonic treasures are stored, such as the Holy Grail.

As tempted as I am to throw all of these old keys away, I’m afraid of doing so because, “You never know” when they might indeed serve a purpose. I don’t know about you but my luck is such that as soon as I discard a key, I inevitably discover its purpose and need to reproduce it requiring a locksmith thereby becoming a more costly proposition.

The only thing worse than having too many keys is to lose them. For most of us, this is the closest thing to madness we’ll ever experience. It’s bad enough we have misplaced our keys, we then begin to suffer from delusional scenarios of Jack the Ripper sacking our homes in the middle of the night.

Keys may be symbolic of someone’s trustworthiness, but they are certainly a hassle to hold and to lose. I just wish retina-scanning or fingerprint technology was more advanced and affordable. It would certainly be a lot easier on my pocket and state of mind.