You are here: Home / Archives for lodge meals

When we eat with our Brothers, we digest more than the meal.
– Bryce’s Law 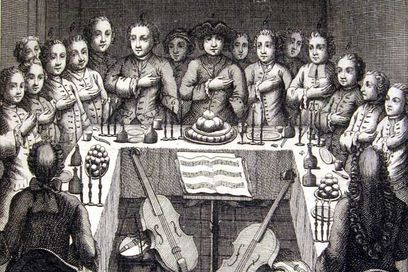 Serving a meal either prior to or immediately following a Lodge meeting has been an inherent part of our Masonic culture for many years. Brothers attend such meals more for the camaraderie it offers than anything else. Although there are no definitive figures on the subject, many Masons assume the meal has a direct bearing on meeting attendance. I tend to believe this. Further, the cheaper the meal, the less likely people are willing to attend.

I recently went out on the Internet to ask the Brethren about this subject and received considerable responses for which I thank all of you for your input. Just about everyone seemed to confirm the correlation between meals and attendance. But I noticed substantial differences in how meals were treated in North America versus the United Kingdom. The North Americans seem to treat the meal much more casually than their counterparts in the UK where it is not unusual to have a catered “Festive Boards” AFTER the meeting and at a higher price than most North American Brothers would pay.

In North America, most meals are prepared under the supervision of the Junior Warden, a task that is seldom relished. But if the Junior Warden executes his job with a little imagination and effort, he can have a profound effect on Lodge attendance. I’ve met some Junior Wardens who simply do not care, and you would be lucky to get punch and cookies from them. However, I have met others who love their job and offer cuisine the Brethren greatly appreciate. So much so, they frequently return to Lodge for more.

In most Lodges in North America, a simple donation is requested to offset the cost of the meal, anywhere from $1 to $8 is common. In the UK, on the other hand, the meals can get as high as $25-$40, an outrageous fee by most North American standards. But then again, it is not uncommon for our UK Brothers to use professional caterers for their festive boards.

In North America, the nutritional value of the meals is questionable, since most Lodges rely on pasta dishes and a lot of starches that “sticks to the ribs.” If you are on a diet, you will probably want to avoid a Masonic meal. And because most Junior Wardens operate on a tight budget (some use the adjective “shoestring”), the fare is often basic. Here are some prime examples of typical meals served at North American Lodge meetings:

(You do not see much in the way of fruits and vegetables do you?)

This is not to suggest North American Masons are incapable of preparing some fine meals, but they are served infrequently and reserved for special occasions such as a visit by the Grand Master, or a special year-end meal. Although you won’t find lobster tails or chateaubriand on the menu, here are the more common examples of special fare served:

Some of these are a bit avant-garde as meals, but they inevitably draw a lot of Brothers to Lodge meetings.

Although our UK Brethren typically enjoy catered affairs, they also have thier own fare they enjoy, including:

As one UK Brother explained to me, “The idea of UGLE members cooking meals for themselves is unheard of to my knowledge. Usually a chef or cook is used and paid waitresses (a few may utilize the stewards) serve the meals. Members pay the going rate for a three course meal (say about $26 – $40 – a lot more in London) excluding alcohol. They regard the fellowship (and cost) of dining as a very important part of their Masonry. The idea of having poorly catered meals would be unacceptable. Under the UGLE, you are not allowed to use lodge funds to subsidize meals. All dining must be self-financed.”

Like it or not, Masonic meals are an important part of a Lodge meeting. And think about it, do we attend Lodge simply to listen to a meeting or do we come for the warmth and camaraderie of our Brothers? A meal greatly facilitates brotherhood.

For those Junior Wardens who cannot think of a cost-effective meal to serve at a Lodge meeting, I’ve just given you a couple dozen ideas for you to consider.

Also be sure to check out Tim’s “Pet Peeve of the Week” (non-Masonic related) at:

END_OF_DOCUMENT_TOKEN_TO_BE_REPLACED

In this final installment of the Faith Hope and Charity series, we consider the symbolism of charity, or perhaps better called love. It is this attribute that … END_OF_DOCUMENT_TOKEN_TO_BE_REPLACED

In this installment of the Symbols and Symbolism of Freemasonry, we examine the text of Albert Mackey's Encyclopedia of Freemasonry on the symbolism of … END_OF_DOCUMENT_TOKEN_TO_BE_REPLACED

In this installment of the Symbols and Symbolism of Freemasonry, we consider a reading of Albert Mackey's text on the subject of Faith as it pertains to … END_OF_DOCUMENT_TOKEN_TO_BE_REPLACED

In this edition of Freemason Information’s Symbols and Symbolism we consider, together, the four cardinal virtues of Freemasonry as gathered form Albert … END_OF_DOCUMENT_TOKEN_TO_BE_REPLACED